Okay, before we get into it, watch this (as if you needed to be asked):

Amazing, amirite? In fact, this may be our favorite solo of the series so far. Puck has a great voice, which makes us wonder why he’s not singing male lead instead of Finn. Still, we’ve been bitching and moaning about handing the mike to anyone but the two leads, so we won’t belabor the point this time.

Here’s what makes this clip so amazing and how it’s going to lead us to bitch again: while the camera swoops and pans during the song, we’re treated to some great dialogue-free character bits: Rachel is swooning, Quinn is swooning (And can we say, we don’t blame them a bit? Who wouldn’t swoon while a boy who looked like that sang that song to them?), the lightbulb is slowly going on over Finn’s head, and, our favorite, Santana, 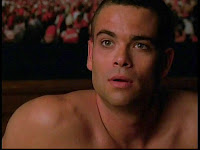 the girl who dumped Puck due to his poor credit rating, looks like she wants to vomit. This is something the show does very well: these quick cuts just to show a character’s reaction to something. It’s a great way to fill in the details on a character without taking pages of dialogue.

Now, why on earth would we complain? Just this: all those little character bits demonstrated that a Rachel/Puck romance not only works wonderfully, it opens up the show to a ton of possibilities, plot and character-wise. So what did they do? Dumped the idea before the show was over. Stupid, Glee folks. Very stupid. 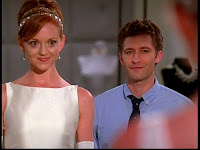 as we loved the episode, this dropped plotline kind of soured us on the whole thing. Sure, we never expected the kindler, gentler Sue Sylvester bit to last the whole hour and we weren’t disappointed when she went right back to being sociopathic Sue at the end, but this, we just can’t let this one go.

And the whole arc about the social repurcussions of cool kids hanging with the dorks – hasn’t this been done already? A couple of times now? Will and Emma stare longingly at each other and sigh while Ken looks on, angry. Hasn’t that been done enough? The Puck and Rachel pairing was the first thing to come along since the pilot that really threatened to turn everything on its head; the first really new thing to come along in 6 or 7 episodes. Plus, we would have loved to see the two of them share a duet. Aren’t we all a little tired of the endless Rachel/Finn duets? 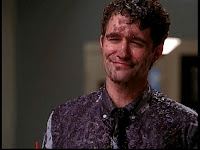 Okay, okay. We’re bitching too much. We really did like the episode. Loved Emma’s solo on “I Could Have Danced All Night,” a perfect blend of character, costume, and song. And while others may bitch about Will’s constant white guy rap, we think it’s funny and besides, unlike a LOT of white guys who attempt to rap, he’s actually good at it. We think he’s cute enough, but when he starts dancing, he goes from cute to hot in a couple of seconds. Also, Kurt (and there’s never enough Kurt to our tastes) got a great bit in when he took one for the team and pointedly asked Finn if his football friends would do the same for him. Nice little burn there. And of course, how can we ever forget the image of Sue and Will swing dancing? 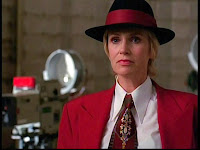 Okay, let’s wrap this up with our favorite quotes and a couple more musical numbers.

“You sunk my battleship, Rod. And you sunk it hard.”

“I, for one, think intimacy has no place in a marriage. Walked in on my parents once and it was like seeing two walruses wrestling.”