Much Like Kurt and Emma, there were a couple moments when we were almost brought to tears last night. 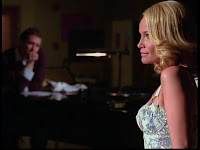 Yes, we’re big drama queens, but can you honestly say you had NO emotional reaction to some of those numbers?

We wouldn’t be, well, us if we didn’t have a complaint, though. Last week’s complaint was that there weren’t enough musical numbers and thankfully, that wasn’t a problem. Unfortunately, we had to do without much of Sue Sylvester. She got one very brief scene and frankly, it left us confused. Why would Rachel go to the cheerleading coach to gain full creative control over the school play? You know what? We’re not even gonna dwell on it. This show isn’t built for analysis or questioning. You just gotta sit back and enjoy it. 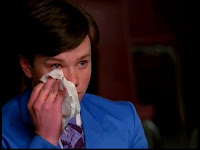 And enjoy it we did. There were some minor plot movements, like Quinn’s pregnancy now being common knowledge among the entire school and Rachel and Finn got another kiss, but really, you watch the show for two things: hilarious dialogue and truly jaw-dropping musical numbers. Which one should we discuss first? Let’s give a rundown of our favorite lines:

“That means the baby’s not a mongoloid!”
“No, but I don’t remember breakfast.”
“I can’t feel my lips!”
“I huffed a lot of upholstery cleaner in the ’90s.”
“I think they call that ‘The Full Silkwood.”
“He looks like an 11-year-old milkmaid.”

Not surprisingly, most of the best lines came from Kristin Chenoweth, 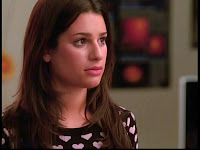 playing Will’s former high school crush, April Rhodes. So good was she in this role that we were almost tearful at her departure. She just won an Emmy and she’s looking for work, Glee people! Put her in the cast full time! Her attempts to win over the glee club members by a)giving Kurt wank material and teaching him that alcohol solves all problems; b) teaching the girls how to shoplift; and C) sleeping with the entire football team had us howling.

And man, can that tiny little pixie sing. We thought “Maybe This Time” was only so-so (because pairing her with Rachel was clever, but their voices didn’t exactly blend). It was saved by that 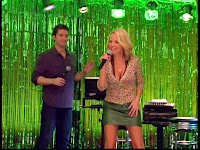 shot of Kurt wiping away a tear, though. Child, we fell out.

Kristin bounced back with Heart’s “Alone” and it allowed us to have one of those little moments that only old married couples can have. Old married people, you know what we mean. You’ve been with someone forever and then unexpectedly you find out something you never knew; something that rocks you to your core. Well, last night, after 14 years together, Tom was shocked to find that Lorenzo has been hiding his love for Heart all this time. Yes, Lorenzo got a little teary-eyed over that fantastic (and way too short) duet between Will and April and confessed that he was absolutely nuts for that song and has been for years. Tom will need some time to process that one. Unfortunately, Lorenzo immediately downloaded this version of the song from iTunes and has been playing it nonstop sin ce last night, so Tom may not get the peace and quiet he needs to come to grips with this.

Later, Kristin brought the house down again with a too-good-to-be-true version of Carrie Underwood’s “Last Name,” continuing a tradition on the show of having high school students sing songs that are COMPLETELY inappropriate for high school students to be singing. Again, if you’re looking for this show to be realistic, then honeys, you are watching the wrong show. 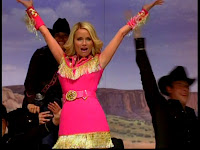 Nothing illustrated that better than falling back on that musical standby: having the understudy come in without any rehearsal and nailing a fairly complicated number. Ladies, can we just say that that final number, Queen’s “Somebody to Love” was the 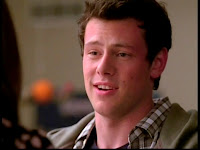 best number on the show yet and just about one of the best things we’ve seen on television in we don’t know how long? Talk about bringing the house down. And yes, it was Tom’s turn to, just like Emma, get all choked up. It’s such an amazing song and those “kids” did a bang up job with it.

Is it us or is it a little weird to see the cheerleaders and football players getting into it so much? 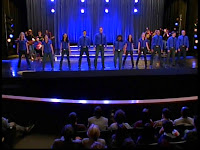 Also, is it us, or is Will a bit of a jerk? He sure seems to find a lot of reasons to hang out with women who aren’t his wife, doesn’t he? And this is the second episode where he let his own ego get in the way of what was best for the glee club. We thought all along that he was treating Rachel a little shabbily to teach her a lesson but no, he was just being a jerk to her. Not that we’re complaining. He was always a little too sickly sweet for our tastes and it’s nice to see them try and make him a little more complex.

But we mean it, Glee people: bring back April Rhodes. Seriously. We’ll start a petition if we have to.