Aubrey Plaza is doggedly creative, perpetually risk-taking, ineffably cool—and, of course, weird in a way that reminds you, constantly, that there’s not a single thing in life that has to be boring or ordinary. In just the past three years she has directed for the first time, married her longtime partner, shot a bunch of great films, written a truly delightful children’s book, and she’s been cast in the second season of arguably the most talked-about show on television, The White Lotus. Now, as she plots her next brilliant move, the sharp, sarcastic, enchanting woman of our collective dreams opens up for Cosmopolitan’s Holy Grail issue cover story. 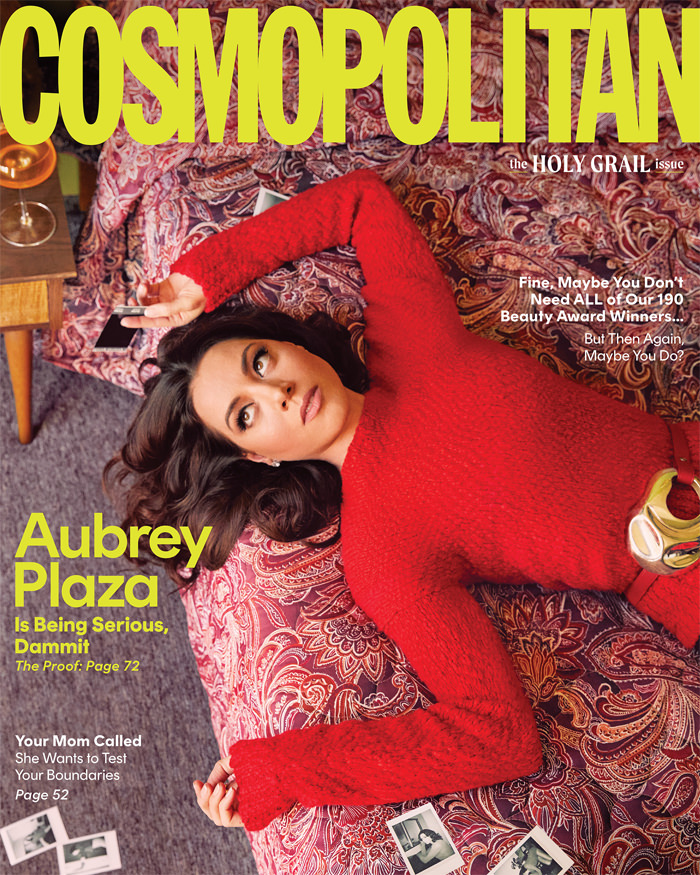 On how she’s changed in the past few years:

“I feel like I finally gave myself some space to breathe and focus on what I really wanted to do… The pandemic was an oddly productive time. 2020 got all weird, then, for me, 2021 started off with a bang and it just didn’t stop. I think because of being quarantined for so long, I was like, F*ck it. I’m going in.”

On being in Italy, filming the second season of The White Lotus:

“I’m so excited. We literally started today. It’s pretty wild. We’ve taken over this entire hotel. There’s an energy, for sure… It’s cool how the location informs the show. Sicily is such a culturally rich place. I mean, there’s a literal volcano that has erupted since we’ve been here. It’s a very charged environment. It’s going to feel like that.”

On being motivated by rejection:
“I remember feeling rejected at a young age. I wanted to act so badly and I had some other friends in my peer group, like John Gallagher Jr., who’s an amazing, Tony Award–winning actor, and I would watch him do auditions and get cast in plays and stuff when we were in high school. I was like, ‘I want to do that too,’ but then I would go and get rejected. It fueled me. I just remember being like, ‘They don’t even know.’ I was so awkward and weird. But I had this burning thing where I felt so misunderstood. Once I started doing community theater and I found my weirdo friends, I felt very emboldened to just really be myself and not care. Public pranks were a big part of my growing up and it was this addictive feeling of doing something embarrassing and not caring what anyone thinks. It feels like a superpower or something. If you don’t care, then you’re free.”

On being misunderstood:
“I’m more often misunderstood in my everyday interactions, which still continues to make me laugh. Like all my text messages are getting misconstrued—I think people think that I’m never serious, but a lot of times I’m just saying what I actually think. I’ve heard more than once that I’m intimidating, that I’m on the offensive all the time, but I’m not.”

On the feature film she finished writing during the pandemic:
“It’s been years in the making; it’s a bigger film than I think people would expect from me. Who knows if I’ll even get the financing. But—talking about taking big swings—it’s, like, a big swing. It’s me doing a type of film that kids could enjoy too, which I really like. Those are the movies that I grew up watching, early Tim Burton movies like Beetlejuice and Pee-wee’s Big Adventure. If I’m going to make a movie, I want to really, really go for it and make something that’s just totally out-there. Who am I to even think I can pull this off? But I’m going to try. I can’t really say what it’s about because I don’t want to jinx it, but it’s a movie. A silly movie! A silly movie that hopefully will turn into theme parks! I want it all.”

On where her ideas usually come from:
“Usually from being out in the world. I don’t live a life where I’m constantly reminded that I’m an actor or that I’m famous. When I’m in L.A., there are paparazzi photos of me walking my dogs every day because they’re waiting for Brad Pitt but they get me instead.”