The stars of The Matrix Resurrections came out to celebrate the premiere and give us one last burst of high-end glam red carpetry before the year ends. We gave Carrie-Anne Moss’s stunning homage to the franchise’s iconography its own spotlight post but trust: she was not the only cast member who came to deliver a serve. That is a Niobe-level serve. We normally hate short dresses with trains (always feels like a frock with delusions of grandeur), but the matching red tights and sandals take this dress someplace a bit weirder and way more theatrical than the design alone. It just suits her. We might have suggested removing one of those gigantic things from her back, but it’s all about serving way too much silhouette and mitigating the effect by going monochromatic. We’re kind of impressed to see him in a mesh shirt on a red carpet. We wouldn’t have thought him the type. On the other hand, the fact that he’s paired it with as plain a black suit as you’ll find outside a rectory or Secret Service headquarters does seem somewhat in character for him. It’s a weird combination but we can tell the suit is fine. Pretty much classic Keanu, from the prep school tie to the hiking boots. He is above reproach in these matters but we do wish he’d picked something just a bit more dramatic. He looks amazing in eye-catching suiting. The kid’s dressed like a kid and that’s fine. Again, we can tell everything he’s wearing didn’t come cheap. Leslie Odom got to NPH’s suit first, for this year’s SAG Awards, but that’s no reason to complain, as far as we’re concerned. Any time someone wants to wear this eye-popping suit on a red carpet is fine by us and a Matrix premiere makes a pretty great place for it. It’s sci-fi in feel without being a costume from the film. David needs to get his pants hemmed. It’s in interesting combination of textiles and covers, but the dress design is very plain with one incongruous and oversized element to make it interesting. It’s not terrible, but it’s not really working for us either. 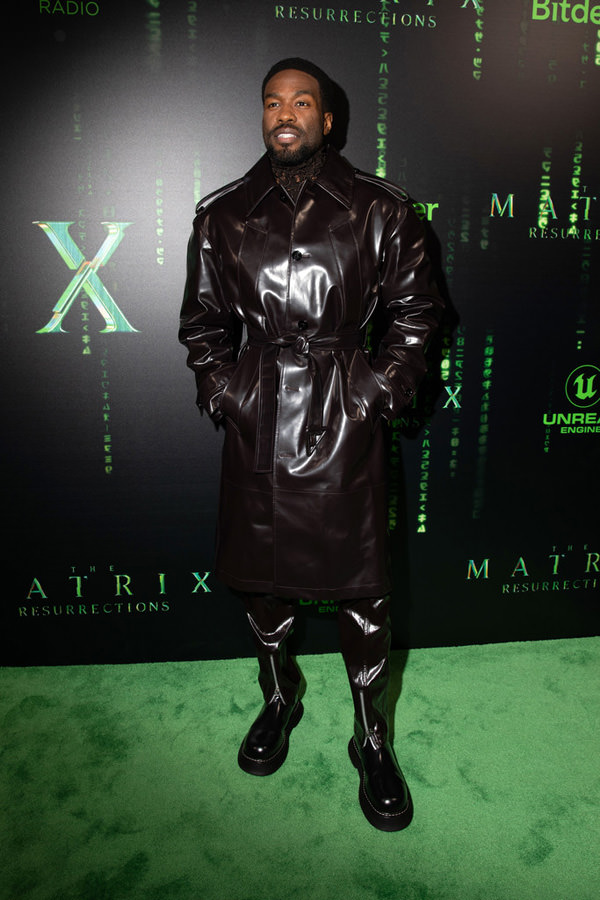 We’re torn. On the one hand, he’s damn near in costume as his character Morpheus (and paying tribute perhaps to co-star Carrie-Anne Moss’s iconic patent leather coat and costume), which is a thing that tends to make us antsy about where the red carpet’s heading (from a fashion-based event to a strictly IP branding exercise). On the other hand, he looks so fucking hot right now.