We wound up laughing through this whole episode, but not because we found it particularly funny on its own merits. No tea no shade against the Spanish queens! Maybe they were all hilarious, for all we know. That was kind of the point to our laughter. As we noted last week, Drag Race España is the one show in the franchise with the least interest in appealing to any American fans. If things got a little murky last week for us, the references and jokes this week completely slipped out of our grasp. In all our years of recapping reality television, we’ve never faced the issue of how to recap a show so completely inscrutable to us. Not that we’re trying to paint any of these queens as too difficult to understand. Drag is naturally broad and calls for exaggerated personae and over-the-top flourishes. It’s not, for instance, difficult to understand the appeal of the mini-challenge, even if the specific references to Spanish football teams and fans flew right past our heads. One thing we can say about Drag Race España is that it really prizes sloppy, messy drag that goes for shock and humor over polished, pretty drag. To be fair, mini-challenges almost always wind up featuring super-messy drag. That’s part of the appeal of them, but when Supremme dubbed Killer Queen the winner of this challenge, it not only seemed arbitrary, but it also came off like a reward for being the best at being the worst, if that makes any sense. And if it doesn’t make any sense, welcome to our world! Or rather, their world. We’ll just sit back and let all of the rapid-fire references to pop songs, celebrities, TV personalities and sports figures shoot past us while we smile and nod politely, quietly judging everyone’s makeup. Which is fine by us, although we really couldn’t tell you if any of the “triple threat” efforts were funny or even very good. For one, didn’t they just sort of remove the third part of the challenge; the part that makes it a triple threat? They were all shot lip syncing on treadmills (which, WTF?) but we never saw any of that in the final product shown to the judges and as far as we can tell, there was no singing component to a challenge that was announced to have one. But if there’s one thing that characterizes Drag Race España apart from its international sisters, it’s a very casual sort of approach to the entire thing. The judges clearly aren’t using a particularly strict or well-defined set of criteria to assess the girls and they really seem to value a sort of sloppy, go-for-it approach to drag rather than anything too weighed down with ideas of skill or talent. Put on a dress, mimic a blow job or make out with another queen and the judges are all going to laugh and clap and pay you compliments. It’s not very complicated and we do appreciate the show for doing its own thing instead of wondering how RuPaul might have done it. To be perfectly blunt, we didn’t think any of the efforts were particularly good. We can’t tell if the judges have lowered expectations of the queens or if the judges think that this is what entails good drag to them. Mind you, we’re not really in a position to criticize anyone here. We’re just sitting on the outside, offering our observations and at this point, we think it’s more than clear that the Drag Race España team loves ballsy, raunchy, messy drag. Which may be one reason why Inti stormed off so dramatically. We’re rarely on the side of any queen who opts to leave the competition in a fit of pique, but we have to say, we sort of sympathized with her. The editing didn’t allow for it, so we don’t know if she felt the criticisms she was receiving were racist in tone, but her actions certainly implied that she felt the Spanish judges were coming down too hard on her Bolivian cultural references. On the one hand, we think her look was messy from the neck up and too simple from the neck down, which made the judges’ critiques sound reasonable to us. On the other hand, they told her she needed to be more elaborate and then gave the win to a queen in a plain beige frock, dressed as a pudding.  Still, we think she should have stayed.

Anyway, let’s get to the looks, which were – again – very referential, with most of the references flying past us. Killer Queen paid homage to the traditionally dressed chulapas of Madrid. Arantxa went as Manchego cheese (and we think her costume was the laziest and the worst). Dovima went as Sant Jordi of Catalonia, Carmen was an Iberian lynx, Hugáceo was a half-built fallas, Pupi also dressed to honor chulapas, Inti went as a Diablada, and Sagittaria was a Crema Catalana. 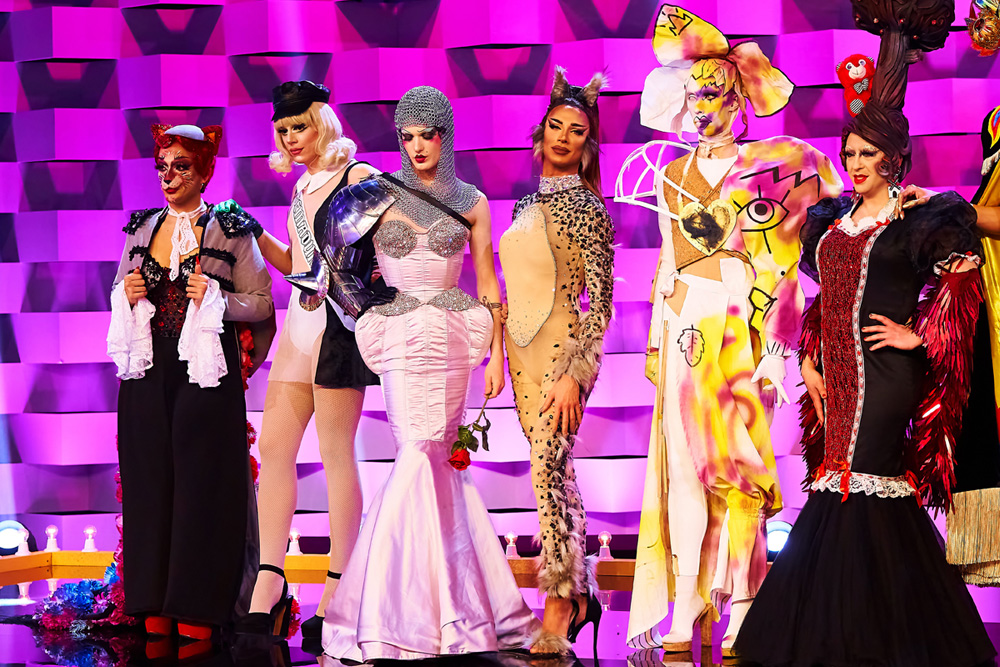 You’re on your own. What can we say? Some of them are polished, some of them are too craftsy and rough-looking, and most of them are making references we can’t rightly assess. Carmen looks great, but she always does. Hugáceo’s was honestly kind of ugly. Sagittaria’s look was fabulous and stylish, but again, it seems weird to give the win to the simplest look on the runway when they seem to prize messier, more over-the-top drag. Dovima’s look was pretty great, but it was somewhat clear that her performance belonged in the bottom along with Inti’s. We’re sorry to see her go, because we think – the roughness of her drag aside – she was one of the more interesting and charismatic of the queens. It was a cute idea to let Dovima have the stage to herself for a lip sync, but it was an anti-climactic ending for a weirdly edited episode. Still, we’re looking forward to sitting open-mouthed and confused through next week’s episode, impressed at the show’s complete refusal to cater to dumb American Drag Race fans.