W Magazine Volume 3 The Music Issue, on stands May 18th, features 27-year-old Grammy Award winning superstar, Bad Bunny on the first of two covers. A story about optimism and the power that comes with breaking boundaries, Bad Bunny talks about his creative process, winning the Grammy for Best Latin Pop Or Urban Album for ‘YHLQMDLG’, and his upcoming acting roles, including his role in the highly anticipated film, ‘Bullet Train’ alongside Brad Pitt. 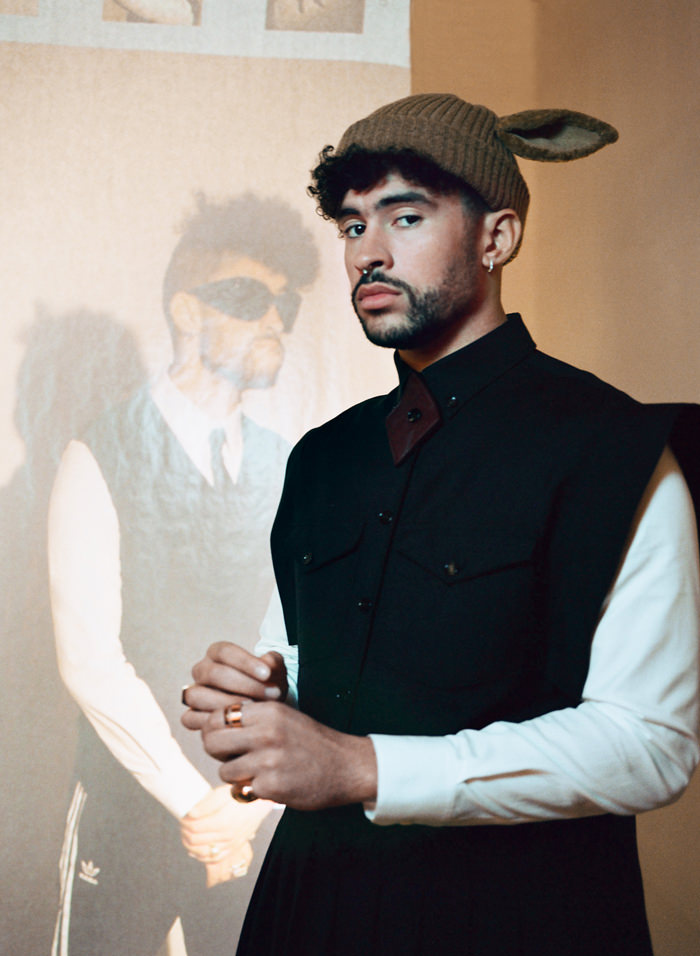 How he felt after winning the Grammy this year for Best Latin Pop Or Urban Album For ‘YHLQMDLG’ “It was one of the more beautiful moments in my career, the recognition of an album that, for me, is very special, and which I consider one of the best albums in the latest era of reggaeton and the Latin genre.”

When I asked if singing and speaking in Spanish was a political choice: I’m simply being myself. I think we’ve already proven that music is a universal language. You have people from all parts of the world singing songs in Spanish. We don’t have to sing in English anymore to cross over.”

What was it like working with Rosalía:  “Beautiful. That was one of the songs that gave me more life in a collaboration. Like, we felt it. I loved the experience of working on a video with her. So, for real, it was very nice.”

On drawing inspiration from legendary Puerto Rican astrologer Walter Mercado: “I liked Walter’s intention to always give hope and messages of optimism. He was born on March 9, and I was born on March 10. We’re Pisces: emotional, sentimental, and sometimes difficult to understand.”

Talking about his various writing processes: “I have, like, a mechanical process that I call mecánico, and it’s the one that I like the least. And then there is the real process, the one with the muse, with the creativity, that comes on suddenly, when you weren’t expecting it. Your subconscious is talking to you about what you are feeling without you knowing, and it comes out, a lot of times, when I’m alone at night. I write sad songs at night. Happy songs I write during the day, after working out, after a fun day. And so I can adapt a lot when it’s time to write, but that’s the process I like the most—the one where, when I feel it, it comes out naturally in the moment, without even knowing where the lyrics are coming from. But they come.”

Teasing the character he plays in the upcoming film Bullet Train alongside Brad Pitt: “It’s about a boy who lost his family at a very young age. He dedicated his life to the streets, to be a murderer. So, an aggressive guy who has suffered a lot.”

Recalling the kind of music he listened to growing up and how it inspires his music now: “My father would usually listen to tropical music, a lot of salsa. My mom liked merengue and balada a lot. At my grandfather’s house, I would listen to old man’s music, like bolero, bohemia. With my friends, I would listen to a lot of reggaeton. Some would listen to rock. I have musician family members, musician friends. And so I grew up around a lot of musical preferences. Obviously, I always identified more with reggaeton, because it was popular music in my country and from my childhood and my generation. That has always been the foundation. But it’s not like I am just there. I have a lot of rhythms in my head.”

Previous post:
T LOunge for May 4th, 2021 Next Post:
“The Last Letter from Your Lover” Starring Shailene Woodley and Felicity Jones | Trailer and Images