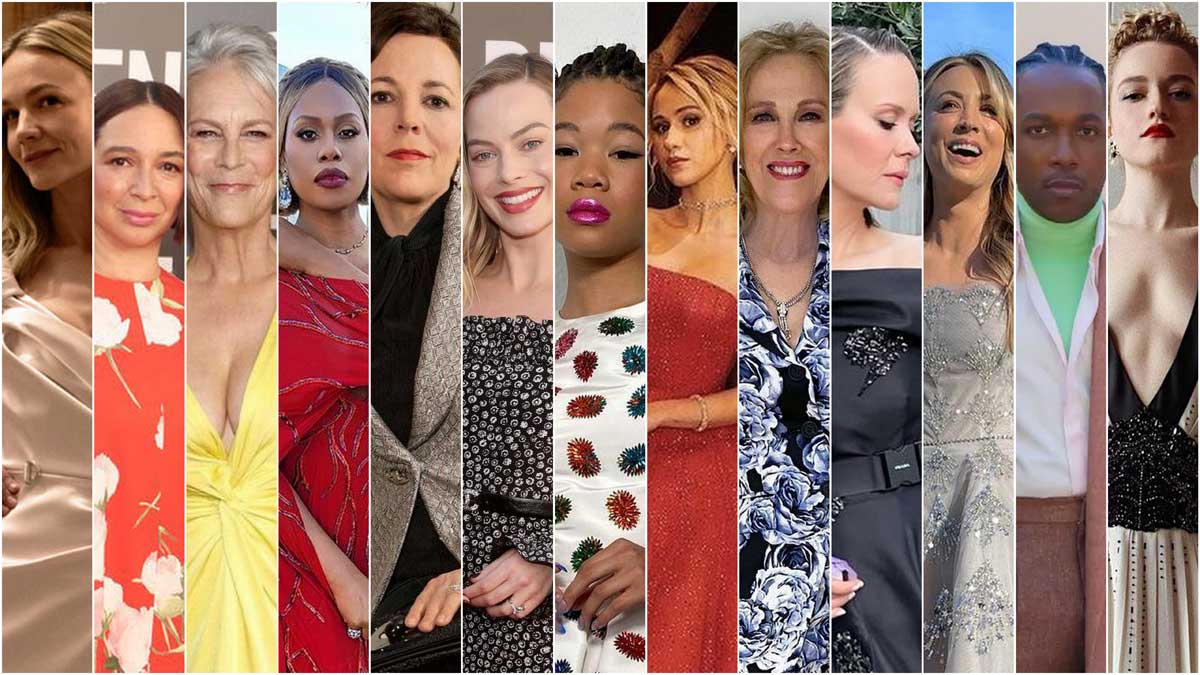 Kittens, as much as it pains us to not milk the most high-fashion celebrity event in an entire year, experience tells us that the public interest in finding out who wore whom and what the bitchy fashion bloggers think of tends to fall off tremendously by the third day of coverage. We might be able to milk a Met Gala or Oscars red carpet for an entire week straight, but a socially distanced Golden Globes that apparently no one watched needs to be dispensed with, post haste. Or via hasty posting. So with that in mind, let’s line the remaining folks up and give them all a good, quick judging before sending them on their way. Don’t worry, we’ll probably pit some of them against each other for a classic T Lo showdown post and there’s another rundown of looks on the way, so you’ll still have plenty of opportunities to tell the stars what they got wrong.

And on that note, let’s get to it! She’s a low-key gal in a low-key gown. We would expect no differently from her. She wisely chose something that will look good from the chest up in a Zoom shot, what with all that interest around the bustline and shoulders. The lighting’s not great, but this looks like a nice, subtle shade of pink, which suits her. It’s not the most exciting fashion, but it’s elegant and it’s to her tastes. Love every single thing about this. We’ve covered her in various ways over the years and we’re here to tell you: her style game has never been as good as it’s been this past year. Miss Catherine has stepped things up considerably and we love to see it. Great print and some fun and fabulous footwear. What’s not to love here? Jaime Lee Curtis’ name trended on twitter for a while after she presented. The funny thing is, every tweet was about her boobs and virtually all of the tweets were hilariously respectful and not weird about it. It was all basically a salute to how perfect they are. She looks spectacular in this dress, of course. We’re not huge fans of the color for her, but the shape and style are perfect. She really is a living testament to taking care of yourself and not falling into the trap of putting off aging. She’s perfect for any sort of vaguely 1920s style. This looks fantastic on her but would probably be difficult to pull off for a lot of other actresses. That plunge is way too much, though. It’s funny. We don’t love the color or the style on its own merits, but you add the whimsy of those starbursts and suddenly it all feels perfectly suited to her. It’s elegant but also vaguely irreverent in style. MISS LAVERNE. Girl, you have brought it.

Her style game is eons away from where it was when she started. This is gorgeous and dramatic and avoids the kind of Beyonce cosplay she has always tended to default to. Love the color on her and we don’t think anyone else could pull off that hairstyle as well. We know this look is a lot. We know that the pieces feel random and oddly fitted. We can’t claim we love every bit of it (a turtleneck under a dress shirt IS NOT A THING AND WILL NEVER BE A THING IF WE HAVE ANYTHING TO SAY AB– sorry, we went off there for a sec), but we do appreciate that he made these choices and turtleneck aside, we kind of love most of the pieces. A dress like this will never win any design awards, nor will it set any trends, but it’s so perfect and pretty and flawless. We’re glad she’s taking this time to project such a high-end ingenue image after a film debut that didn’t exactly let her be a pretty princess. It’s an okay dress, but it’s a classic example of “You could have any Chanel you wanted and you picked the least Chanel-looking dress of the lot?” Oh well. If nothing else, she’s ready for her vaccination. Oof. Again: You had Valentino at your fingertips, evidently. Why pick something that looks like it came from the nightgown section of the department store? The print is pretty and she’s perfect for a good muumuu or kaftan, but we hate the hem length, the neckline, the lack of sleeves and the big honking seam running down the front. It’s just not a great design. Sharp, smart, camera-ready and the kind of look where she can easily slip in and out of the fussier or less comfortable parts during any camera break. This strikes us as much closer to her style preferences than any awards show gown. A real stunner of a dress, but one of the few that probably didn’t benefit from the home-based setting. This dress needs a red carpet, killer shoes, drop-dead jewelry, and shots from every angle. We hate to make an issue of this sort of thing, but given the dress, some sort of much more subtle or coordinated wrap for that cast would have been so much better. That purple is working against all the eleganza. This is the quintessential Storm Reid look in a lot of ways; a little princessy, a little pop star, a little ingenue, with an absolutely killer lip color.

More to come in Part Two!