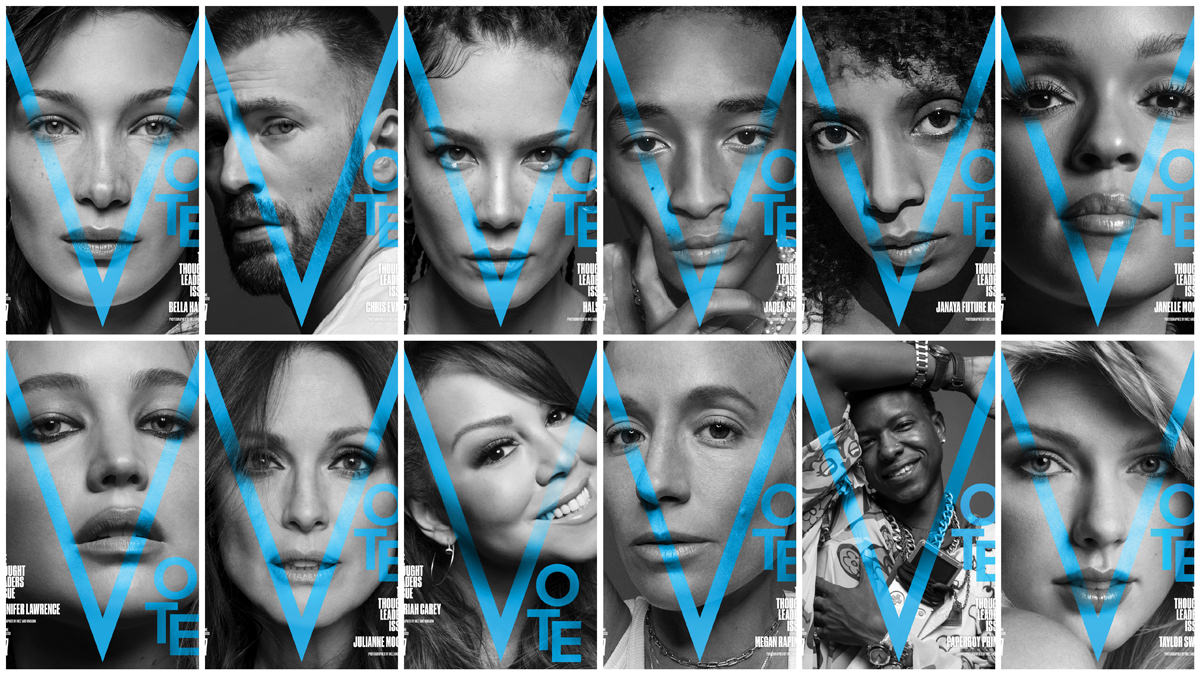 For a very special edition of V Magazine some of the most thoughtful, eclectic, and vocal talents reflect on the importance of using your voice. Aptly titled the Thought Leaders Issue, V127 eschews the typical V format in favor of one single feature: a profile of 45 musicians, politicians, models, and more who are leading the next generation of social and cultural activism. Each personality was shot in black & white by the renowned duo Inez and Vinoodh, who also contributed a poem in response to the current political climate. The issue is presented with 12 different covers, each emblazoned with the word ‘Vote’ using the classic ‘V’ logo. “Voting is a right we have as a part of a democracy. It is a freedom that many people in this world do not have, so being able to use our vote to help individuals and communities across America is a right we should all exercise. [I am voting] to represent the younger generation. We all have a lot to say and want to be as vocal as possible – [voting] is how we can put our thoughts into action and see the changes we want to see.” “I think we are on the cusp of a really motivated, driven generation of young people who are very awake and connected. It is such a platitude, but they really are the future. It’s always the students, isn’t it? Whether it was the civil rights in the ‘60s or today, its’ always the young people [working toward change]. With every younger generations, they care and less about the archaic social norms that people before them are trying to preserve. Now more than ever, young people are involved in shaping the political and social landscape. It really is like a potter’s wheel and these young voices are molding our future.” “I’m voting because I haven’t been happy with the leadership. I don’t feel as though I’m being represented or that I’m being listened to, or that the black community is being represented or listened to at large. Things need to change, starting with how we treat the people of color in the nation and how we’re allowing these systems of racism to still exist and for us to still follow them. That’s the main thing that keeps me up at night.” “It is always so important to take every opportunity we have to punch up at unjust systems of power. The idea of voting as a singular effort at change doesn’t work. But is it a necessary one? Yes. We should always be fighting the consolidation of power, and especially when that power is corrupt.” “I will be voting against racist policies and tactics that have continued to oppress and traumatize Black people. Even I have been gerrymandered, just before the election of [Atlanta Mayor] Keisha Lance Bottoms, my county was redistricted, meaning her name was not on my ballot. After the election, my county went back to the original county lines. That is gerrymandering, and it is used to oppress and separate our voices.” The bad news can feel overwhelming at times, but the most important thing is to stay focused on the ways we can all be part of the solution. In the wake of the deaths of George Floyd, Breonna Taylor, and countless others, I’m inspired by the millions of people around the world who have banded together to finally say ‘enough’.. the collective voice of the people s enacting real change, and that gives me hope. But there’s still a lot of anger, which I think is important.” “It’s important to vote because it’s our responsibility. We have liberties and freedoms in our country and advantages that not everyone has. It’s something that we as citizens have to do and a right we shouldn’t take for granted, especially when so many aren’t afforded this right. We need to all be actively participating in our democracy, and one degree of participation is voting.” “Voting is so important because it is one way to show up for ourselves and our communities. It’s an opportunity for us to honor our ancestors – those that were unable to vote because of racism and sexism – and elect people that we hold accountable. I am so proud of the young people organizing, particularly Back people, who are leading this movement.” “I believe voting is a part of a deep responsibility each of us have to make this country better. Every right and liberty [that] I enjoy has been voted into law. Now those of us have those rights must [also] also vote in the interest of others. The world I want to live in is not reflected in our government officials and that needs to change. This election is a choice between democracy or autocracy. There is no other reason I need to vote in November.” “I’m voting because we gotta spread love. We gotta represent our community. We gotta make sure our voices are heard, because most of the time a lot of us don’t actually get our and vote. With that and all the other work we’re doing in the streets, change is gonna happen.” “The change we need most is to elect a president who recognizes that people of color deserve to feel safe and represented, that women deserve the right to choose what happens to their bodies, and that the LGBTQIA+ community deserves to be acknowledged and included. Everyone deserves a government that takes global health risks seriously and puts the lives of its people first.”

Previous post:
The Daily T LOunge for October 8, 2020 Next Post:
Letitia Wright in Chanel at the BFI London Film Festival: IN or OUT?