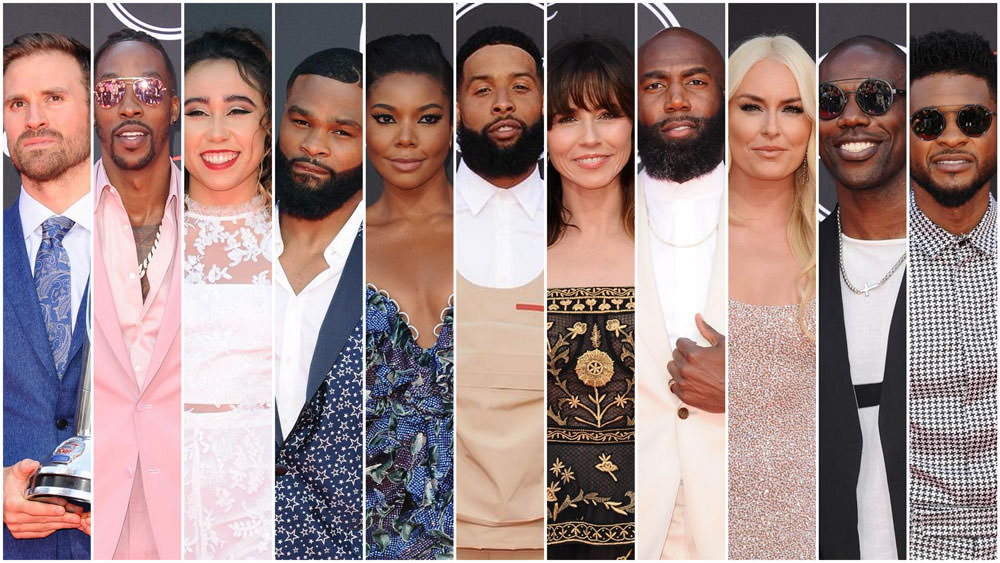 We put the spotlight on a few of the other attendees, but it’s time for the rest of them to line up on the track and start their engines. Or something. The point: let’s judge some fashion. Great suit. If you’re going to wear a blue suit on a red carpet (something we don’t normally recommend), take it as far away from businesswear as possible. The color looks great and the kicks are fun. The bag’s way out of proportion to the rest of the look, though. LOVE. But then again, we almost always automatically love it when a man wears a pink suit. We’re not feeling the high-water hem, howevs. If he wants to wear a beauty pageant sash, who are we to say he can’t? Hate to be bitches, but we don’t like the shape of her dress or the textile in which it’s rendered. Oof, no. Total “Bride at the Beach” look. It’s pretty. We’d have recommended she save it for some luncheon or other day event. It feels a little low-key for the ESPYs. After all… This is pretty much the lady uniform for the night. Funny thing about that: we said earlier that testosterone-heavy events like this and the GQ Men of the Year parties tend to expect the women to show up serving sexy – which is true. But what’s ironic is that the sport-themed red carpet is way more stylish from a menswear point of view than the party put on by the actual men’s fashion magazine. Case in point: You just don’t see the men putting on this level of finery for most other celebrity red carpet events. We LOVE this look. But we do not, we’re sorry to say, love this one. That kangaroo pouch is hideous. We think this could’ve worked a lot better without the weird strap/stripe things hanging off the pants and a t-shirt with more workable proportions. We’ll say … we respect this one more than love it. Those proportions are ROUGH.