Sarah gets credit for three things, in our book:

1) She wore an unusual color,
2) Which was part of that “bottle green and gold” color combo that we absolutely adore, and
3) She opened her purse for Giulana Rancic and handed her some pot on the red carpet, on live TV. It was glorious. 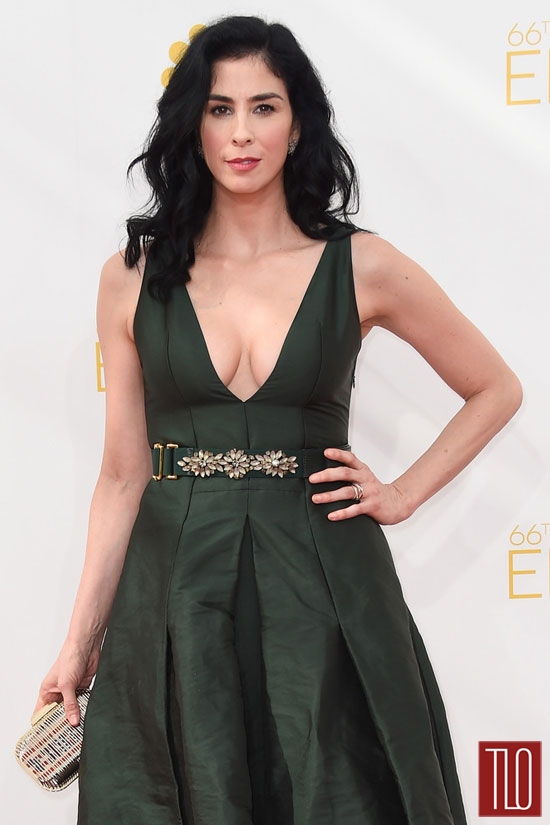 Keeping with the theme, her dress is pot-colored. Very thoughtful and cohesive, Sarah. Perhaps next time you can replace the flowers across the front with gold pot leaves. Then again, you might come off looking like some sort of Game of Thrones character. Lady Ghangia of Merry H’Wahna.

As style archetypes go, she’s the quintessential Funny Girl, which means she’s almost genetically unable to wear clothes without clowning it up just a little. She ran up to the stage barefoot after her name was called, and even talking to Giulana at the start of the night, her dress was a wrinkled mess. There’s a lot to like about Sarah Silverman, but she’d probably be the first to agree that “poise” doesn’t appear high on the list.

Still, we love this dress even if it is too tight in the bust and the neckline is too broad and plunging on her.  Also, the hair and makeup aren’t really up to it. She looks pretty from the neck up, but she had the opportunity to look dramatic. We’d have played up the gold in her jewelry more and possibly put her hair up and gave her a more dramatic eye.