Home » Television » DOCTOR WHO: THE TIME OF THE DOCTOR

DOCTOR WHO: THE TIME OF THE DOCTOR 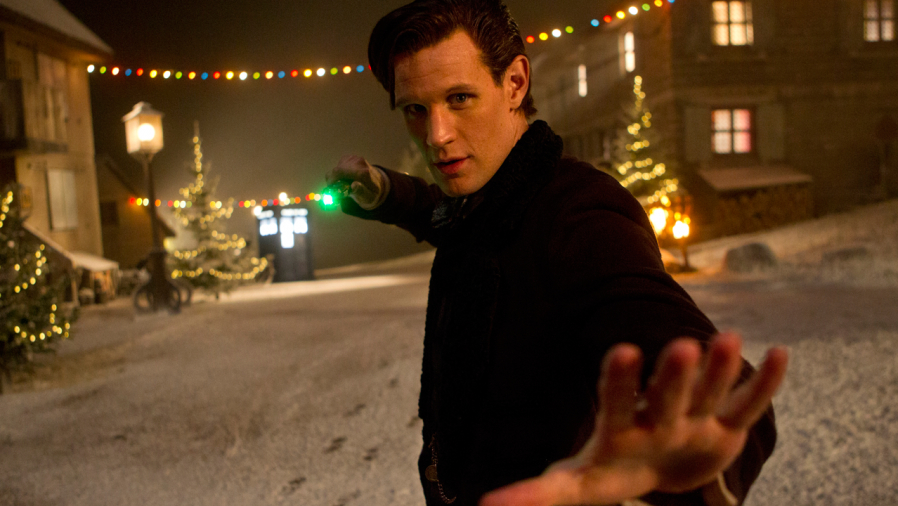 Matt Smith in BBC America’s Doctor Who: The Time of the Doctor

In other words, we’ve watched this thing 4 times now and we like it a little less each time. If we keep this up, we’ll wind up hating it in a day or two.

Look, let’s get this out of the way: the last 15 minutes or so were just about perfect and yes, we teared up (when we weren’t cheering, that is). It was a truly beautiful sendoff both for the 11th-but-not-really Doctor and for Matt Smith. He always played the character like an old man in a young man’s body so it made a certain amount of sense that he would age himself up so drastically after being forced to settle down in one place for centuries.

Unfortunately that was just about the only thing that did make sense in this story. We’re gonna cop to some laziness here, as well as some Moffat fatigue, because we’re not even going to bother listing all the things that made no sense or were left unexplained. If Moffat couldn’t be bothered to write a story that holds together, should we really put all that much effort into showing how it falls apart? Besides, one thing we know for sure, you either loved or hated this special and there’s not a thing anyone can say to convince you otherwise. When someone who hadn’t seen it yet asked us how it was, we told them it was a lot like the Lost finale: nothing made sense but you’ll get a good cry out of it at the end.

But really, we can’t let this one question go: Why the HELL didn’t he load up the entire population of the Town of Christmas (there are not enough groans in the world…) into his TARDIS and take them away from all that danger? He claimed he was staying there for centuries, even though he knew he was eventually going to lose, so that he could save as many lives as possible. Well he could have saved all of them if he’d just loaded them up into his town-sized-on-the-inside Tardis and taken them somewhere else.

Also, since when did Clara gain the ability to command the Time Lords and why did no one else, least of all the Doctor himself, think to actually talk to the people on the other side of the crack and ask them to go away lest they be slaughtered? Wasn’t that the whole point? Everyone was there to kill the Time Lords when the emerged from their “other universe,” right? So why not have a good heart-to-crack talk with them and let them know that now’s not the best time to do this and by the way, since I’m your only shot at getting out and I’m out of regenerations, you might want to ease up a little so I don’t get killed defending you and leaving you stuck there forever?

Also, we spent most of Tasha’s scenes trying to figure out how River Song got a new body and became space-pope until we realized – with no small amount of shock – that she was merely Moffat’s latest attempt at writing a woman character, which means she’s exactly like his last attempt to write one. It’s actually embarrassing when you realize that he didn’t write a new version of River Song, he wrote a completely different character who sounded EXACTLY like her (“Hey, Babes.” HEY BABES? ARE YOU FREAKING KIDDING US?), was also referred to as a psychopath, and can fly the TARDIS, because he literally cannot write anything but two types of women: the randy, adventurous middle-aged woman, and the wide-eyed, supportive, “assistant” girl with a mystery in her past. That’s IT. That’s all you get with him; endless cheap ripoffs of River Song and Amy Pond.

Don’t even get us started on the bizarre way Clara’s family was shoved into the story with virtually no explanation or introductions. Who was that woman at the table? No idea. Moffat never felt it important to introduce her. All we needed to know was that she’s a bitch. How typical for him.

Feh. It was bad. No two ways about it. And Moffat’s clearly burnt out on the character just as it became obvious in retrospect that Matt’s been burnt out for most of the last year. Everyone should’ve left when the Ponds did, because most of what followed after their departure was pretty bad, with the exception of the 50th anniversary special. We’re very much looking forward to Capaldi’s turn at the helm, but it’s tempered by the knowledge that Moffat’s still in charge.