Let’s just get this out there: we thought this was the weakest episode of the series so far. We were as engrossed watching it as we always are, but this time the mood and the excellent performances weren’t enough to prevent us from noticing just how much the story is indulging in some fairly well-worn cliches. We suggested last week that the formulaic aspects of the show were intentional but now we’re not so sure. 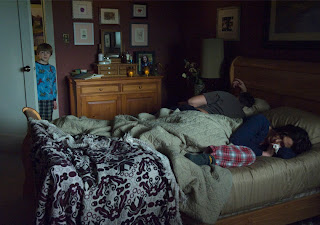 week’s episode. No, to our surprise, the case against him is only getting stronger, with a history of these, at best, slightly inappropriate relationships with his female students, some holes in his alibi story, and a chemical found in his house that was all over Rosie’s body and which indicates a killer who knows what he’s doing and may have done it before. Okay, then. That looks pretty bad. Here’s the thing: there are eight more episodes.

The likelihood of any prime suspect this early in the story turning out to be the killer is pretty damn slim. And that’s a big reason why the format of the show is starting to weaken, in our eyes. A season-long murder investigation is a great concept, but if you keep throwing out suspects with strange, hidden pasts or heretofore unknown associations with the dead girl, you’re entering Twin Peaks territory and the audience is not going to be as engaged with the mystery.

In addition, while we … “enjoyed” is definitely not the right word…appreciated the wonderfully acted scenes of the Larsen family’s grief prior to this episode, it was entering misery porn territory this time around. It wasn’t enough that we had to watch them pick out a dress; we also have to watch them drop it off with the creepy funeral director and then reluctantly wait around while he dresses their daughter’s corpse. We don’t need these scenes. We can get caught up in the drama and pain of a grieving family without having to walk with them every step of the way while they prepare a child’s corpse for burial. The scenes with the boys, each dealing in their own way with their absentee parents, were a better way of illustrating the family’s emotional state.

And what was that odd scene in the supermarket, where one of Mitch’s presumed friends gave her the cold shoulder? People don’t act like that with grieving people. Maybe there’s some further story there, but it seemed to just be another in an endless parade of “grieving sucks” scenes for 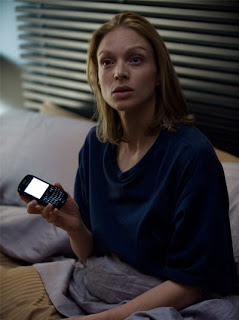 the characters. Although we will say the scene between Mitch and Richmond was quite good, with an economical use of dialogue that allowed both actors to do almost all the acting on their faces.

But Richmond’s campaign almost feels like an entirely different show every time we jump over to them. We still can’t say we’re all that interested in the machinations of Seattle’s local politics and we cared neither about the reveal of the mole nor the reveal that Yitanes was behind the mole. The only nugget of politics that made us sit up straight was the Mayor’s line to Jaime: “It’s all about the waterfront.” If the political aspect of the story is going to tie directly into the murder (rather than dancing on the edges of it, as it’s been doing), then it’s a safe bet that the oft-referred-to waterfront development has something to do with it.

This was further bolstered by the biggest cliche of all: The dead girl left behind a mysterious, arty short film, with image after image of symbols and vague mysteries. Who shot the film? Who knows, but at least some of those scenes were shot… near the waterfront. Dun dun DUN!!!!!!

Aw, we’re being just a little tetchy. It’s just that they’ve so effectively hammered the point that nothing is as it seems that we find ourselves particularly unwilling to engage with anything we’re seeing. Sure, Holder took money from a guy in a car. Weird. But then he sat at his desk in a police station and openly counted it. If the former action was criminal in some way, then the latter one makes no sense. And besides, they keep setting him up as something darker than he turns out to be. Granted, Kris accused him last week of using, and that seems like a safe assumption, but who’s the woman and the kids in the house where he left the money? It seems a safe assumption that this is his family but again, we’re not willing to hypothesize, figuring it’s something totally unexpected which they’ll get around to answering shortly. That seems to be the pattern.

And finally, Linden does what we al 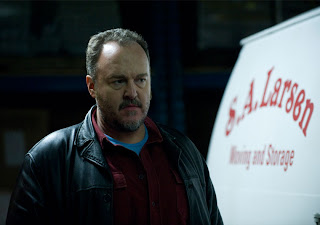 l knew she was going to do the second she swore she’d never do it: she’s allowed herself to get too sucked into the case, a point illustrated by the biggest cliche of all, the scene where the detective stares at a bulletin board loaded with dead-girl information. All it was missing was the intense, earnest, “Who…ARE you, Rosie Larsen?” Instead we got the almost-as-bad “Can you ever really know someone?” Which allowed her long-suffering doormat of a fiance to get in a pretty good burn. “Yes. Which is why I should cancel the party on Sunday.”

Don’t get us wrong, the story is still cooking and we still love the cast and the general tone. A weak hour of this show is still a pretty damn good hour of television in general. We’re a bit worried that the weak parts of the episode indicate weaknesses in the show as a whole.

All right, let’s try and muster up some theories:

* Ammonium Hydroxide isn’t all that unusual a chemical for anyone to have in their home, is it? This smells like another red herring. It could be that Rosie was at his house that night, though. And maybe he had the Richmond campaign car and she took it from him. To drive out into the park…for some… reason. Well, we didn’t say we’d come up with good theories. Still, we’re telling you: Ammonia? Red herring.

* Richmond has the worst luck of any politician. He finally gets his campaign back on track and then shoots a commercial with the guy who’s likely to be revealed as a prime suspect in a murder case.

* There was something a little off about that whole scene with the guy making the kid’s bed.

* So Stan’s going to do the cliched father-of-the-victim thing, isn’t he? If he finds out about the teacher and goes after him, Richmond can put his head between his legs and kiss his ass goodbye.