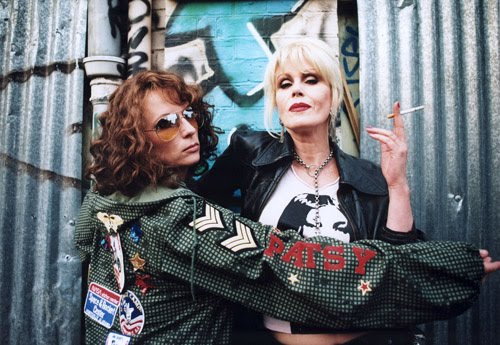 Sweetie-darling, AB FAB IS COMING BACK!

“Joanna Lumley and Jennifer Saunders will return for a new series of Absolutely Fabulous, the BBC has confirmed.

The pair will reprise their much loved roles as Patsy and Edina for a three episode run of the hit show – the first new shows for six years.

Filming is scheduled to begin this summer although Miss Saunders has yet to write the script.”

“Jen wrote to me and said, “Let’s talk through it. What do you think?’. And I said, ‘Bring it on’. Because we’re all still here. Mother’s still alive, the wonderful June Whitfield. Julia Sawalha [and] Jane Horrocks [are] all still alive and available … and I think we just have to do it,’ she said at the time.

‘The great thing is that because … we fast-forwarded to where they’re very old and nearly dead and practically plugged into vodka machines, it doesn’t matter how beyond [the original series] we do it,’ she added.

Absolutely Fabulous was first broadcast in 1992 and ran for three series and a two-part special until 1996. It returned for two more series and another two specials between 2001 and 2004, with a Comic Relief edition on BBC1 in 2005.”

To be honest, there was a time when we would have greeted the news with something of a shrug, opining that you can’t really recapture an old feeling and besides, every return of the show since its original run has been a bit weaker each time.

But LOGO TV recently ran a marathon and, since we hadn’t actually watched most of the original episodes in close to a decade, we DVR’d it in case the urge struck us to watch it again. Perhaps it was due to the aforementioned sabbatical away from the show, but we got sucked right back into the world of Eddy and Pats within the first couple minutes of the pilot and the next thing we knew, we’d wasted an entire weekend on the couch, watching episode after episode and laughing our asses off, even at the jokes that have been told and retold by drunken queens ad nauseam for the last 15 years. It took us some time away to realize it, but Joanna Lumley and Jennifer Saunders created two of the most original characters in the history of television; two totally and un-apologetically self-centered and sybaritic people with virtually no redeeming characteristics whatsoever. Fabulous.

And just imagine Eddy and Pats unleashed on more up-to-date topics like Kate Middleton or Lindsay Lohan or even – dare we ask? – fashion bloggers. Can’t wait for the bitchery to be unleashed, darlings!