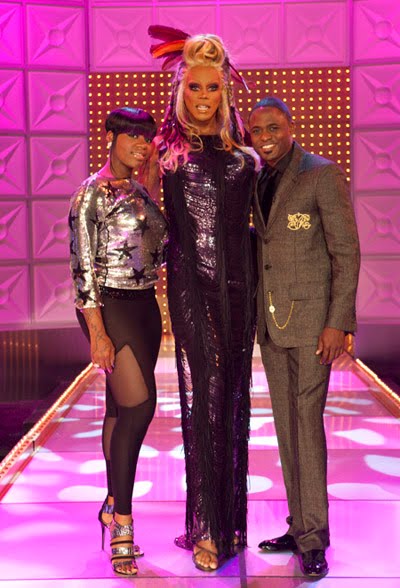 It feels weird to do this, because we’ve never done it before, but we have to critique Ru’s look here. It’s the first time we’ve seen her and had a reaction of “Ooh, I don’t like what she’s wearing.” It didn’t flatter her at all.

Fantasia was kind of adorable (and Shangela’s impersonation of her was hilarious). Wayne was all right. 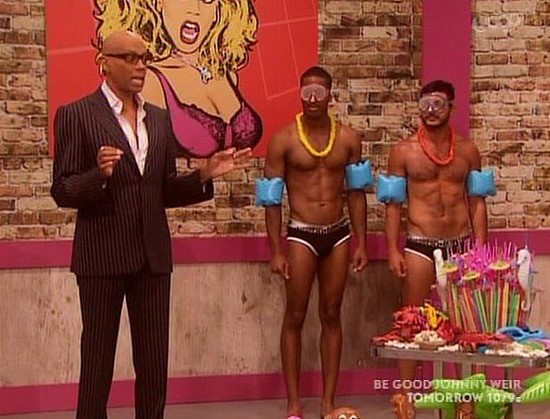 We suspect the Pit Crew had the Most Awesome Summer Ever while shooting this show. Paid to mostly stand around in their underwear or put on goofy outfits. They were smoking pot the whole time, we bet.

Okay, this is likely to get some people angry at us (And seriously, people, stop getting pissed over this show. We can guarantee Ru would be upset to see people fighting over it.), but we’re going to present the following photos sans commentary until the end. Take a good look at each entry. 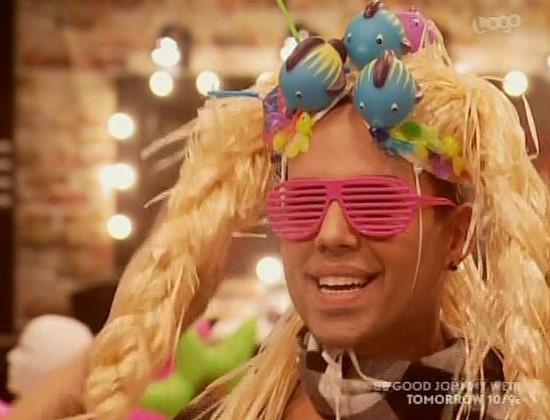 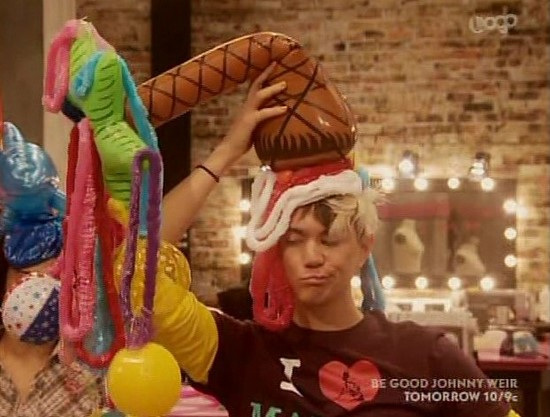 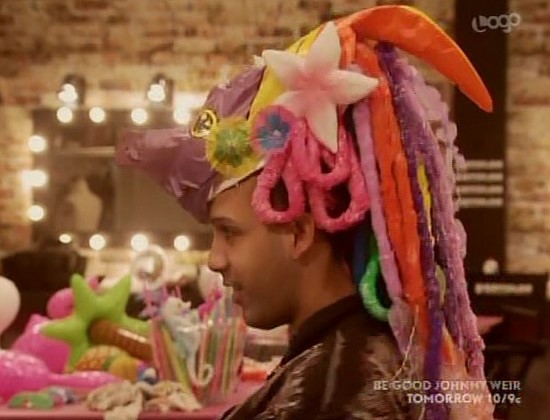 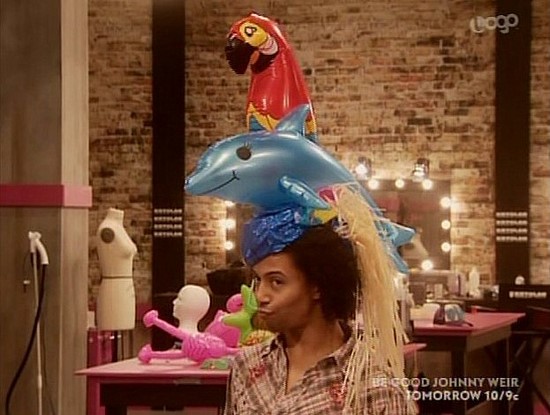 Every other queen was piling as much tacky crap as they could while Raja decided to make a Philip Treacy style hat. Now, you could argue that Raja’s hat is also just crap piled on, but we beg to differ. It has a shape and a form to it like an expensive chapeau and he largely avoided all the brightly colored plastic to go for something more high fashion.

We’ll get to his runway looks in a second post, but when he walked out last night, we both oohed and aahed and said to each other “No one can touch Raja. She’s miles above the rest of them.” And that’s true, at least on a style level. Raja is simply more creative and has access to way more references due to years working in the fashion and beauty industries. She’s still not even close to being a consistently strong stage act, but for persona and style, she simply can’t be beat. It remains to be seen if Ru will consider that enough to give her the crown.

But this week, the prize went to someone else and at first, we rolled our eyes. 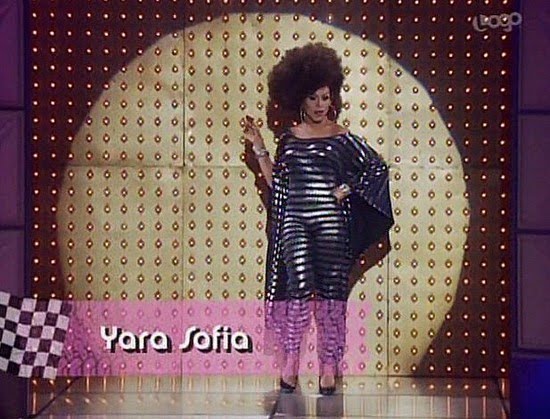 Because it seemed a little too wrapped-up-in-a-bow to give the win to the one remaining contestant who’s starting to feel pressure because she hasn’t won yet. 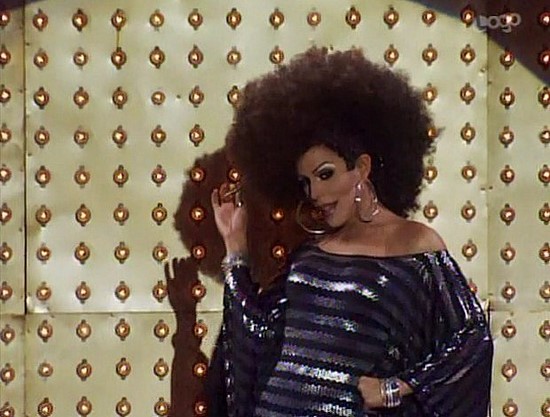 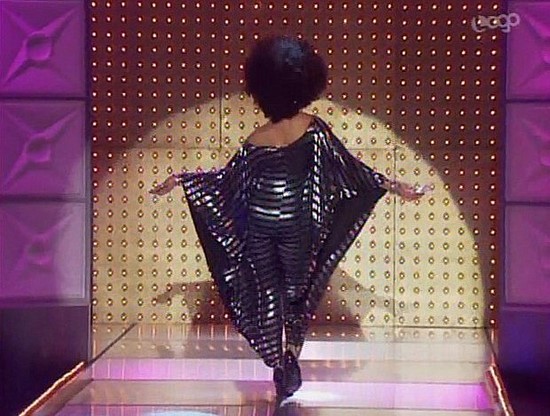 But the bitch nailed her looks. This one was perhaps a bit too close to Manila’s disco look of last week… 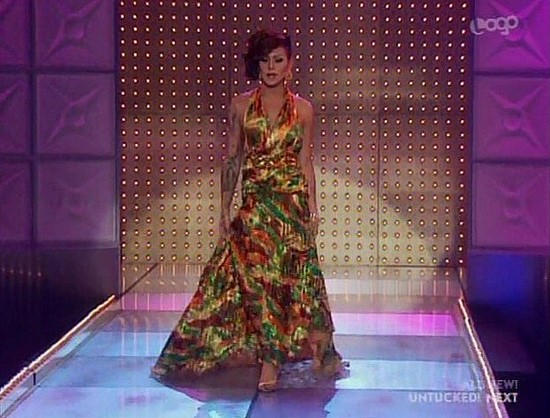 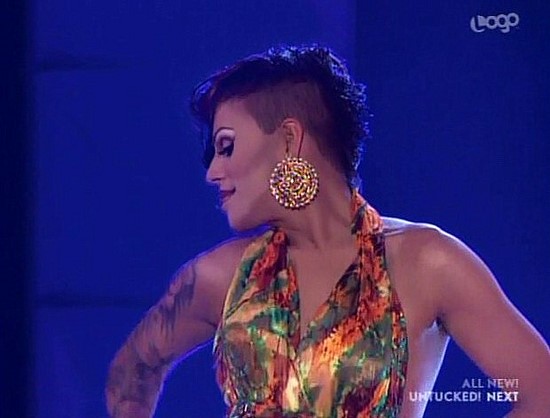 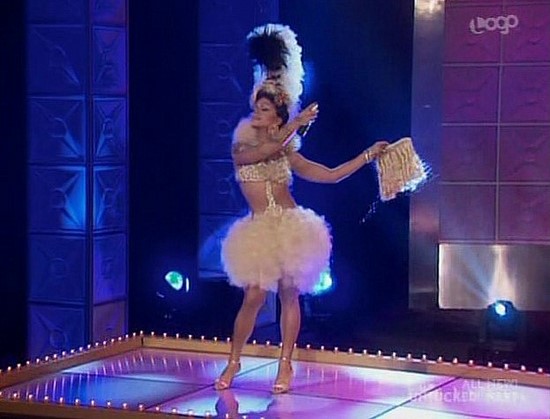 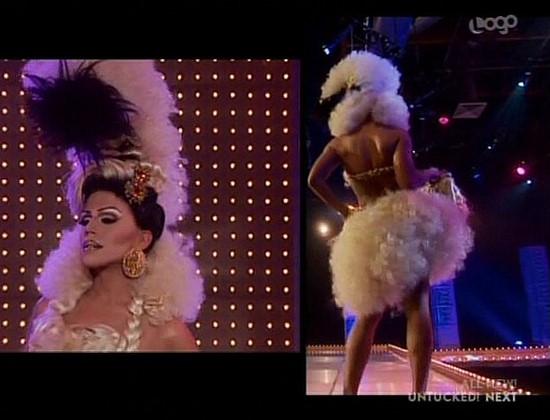 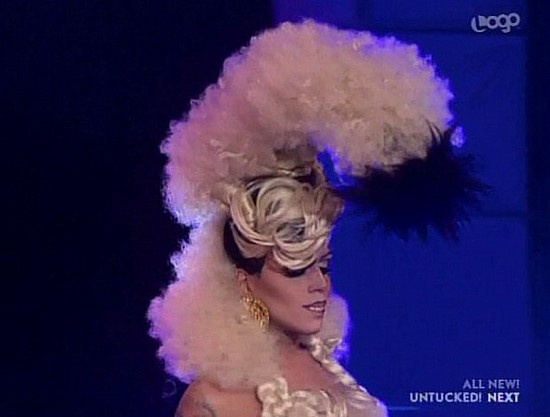 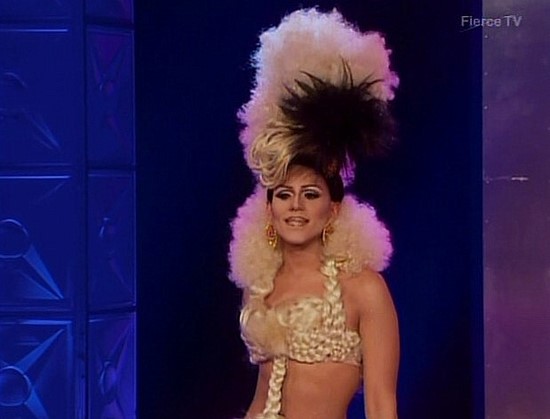 And we still don’t quite get the point to the thing on her head, but she brought a polish and a style to her looks that she hasn’t always shown. We think (no surprise) that Raja’s runway looks were win-worthy, but we understand why Ru gave it to Yara instead. As we said, we’ll talk about Raja’s looks later, but Ru likes when a queen shows some growth and movement and Yara really brought her A game this week. 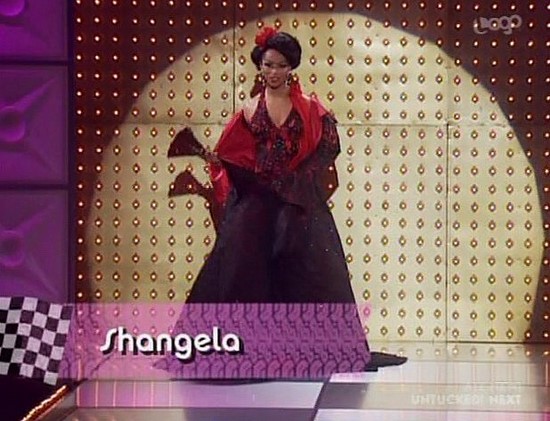 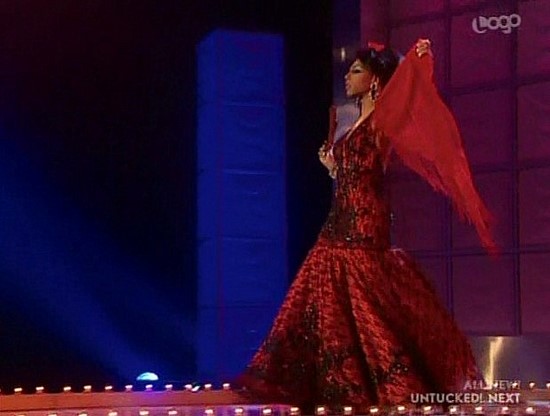 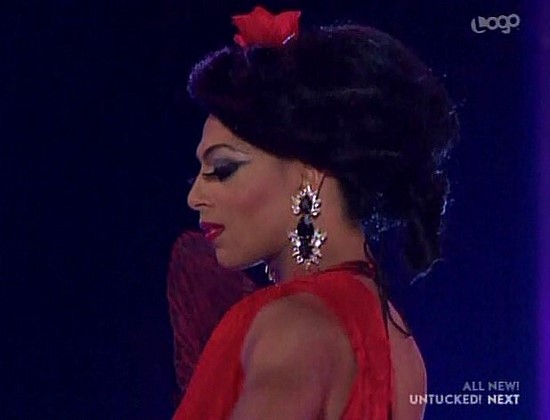 But Miss Shangela really hasn’t been showing much growth at all and finally, even Ru couldn’t hold on any longer. Shangela’s a big proponent of having the performing part down, but she’s not as polished a performer as she’d like to think and a queen can’t keep ignoring the looks part of her persona.

We agreed with Manila when she said this getup looked borrowed. And it was lame that she tried to pass a flamenco costume off as a period look.

What happened to that Diana Ross wig she was working on? 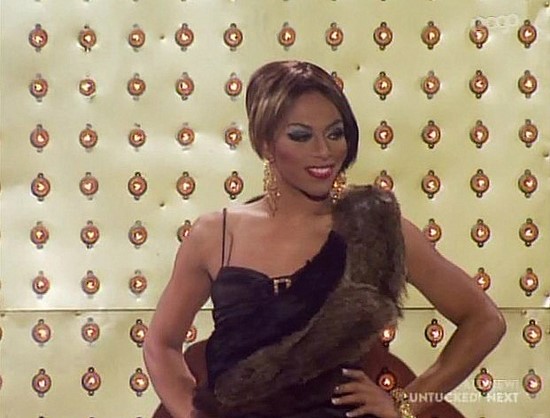 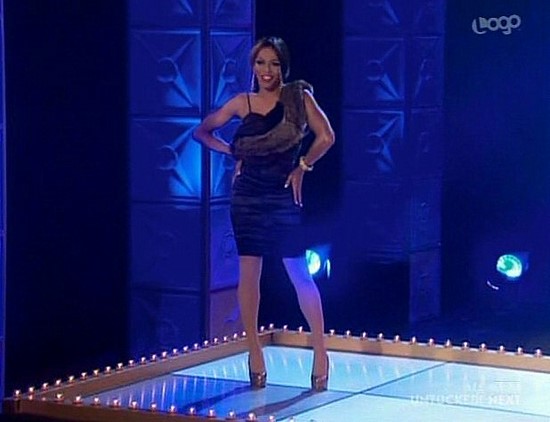 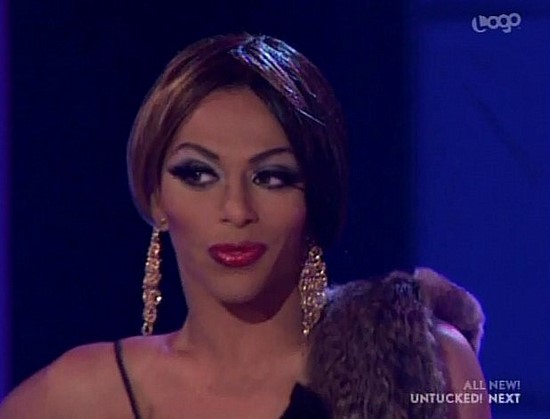 And while an Oprah’s Legends Ball look is an inspired idea, she once again failed to follow through on it. She doesn’t seem to get that she should walk out and have the audience instantly understand the “point” to her look. This doesn’t take it far enough. It doesn’t even look red carpet. As we recall, the Oprah ball has had some cracktastic diva looks on the red carpet. She could have gone all turban and gown here, but it fell flat. 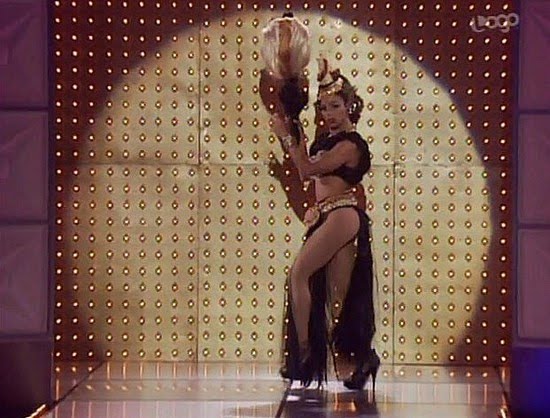 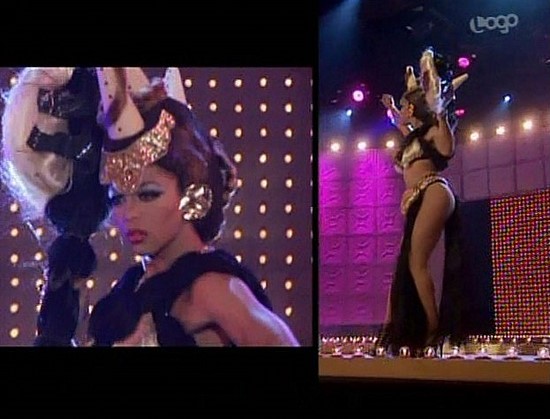 And this was just ugly and weird. 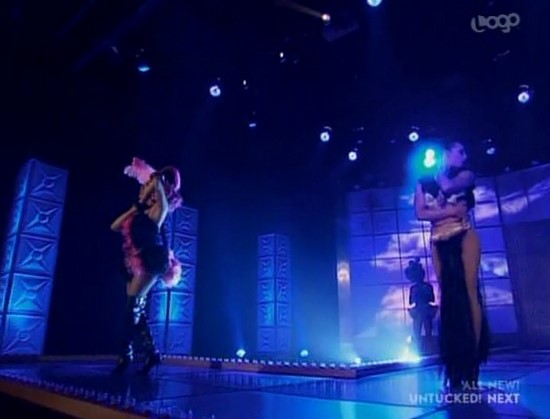 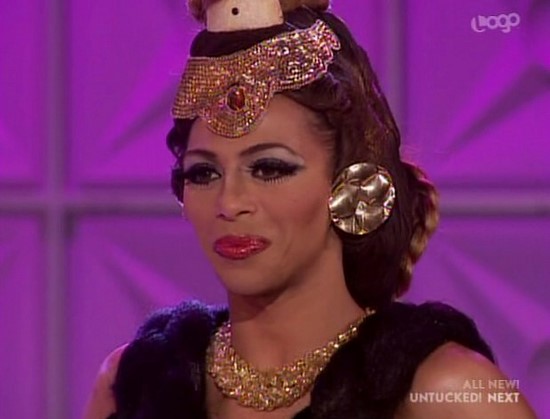 Here’s the thing about Shangela: she really does have the chops to be some sort of performer and you can tell how badly she wants it. But like Wayne , we question how much she wants to be a drag queen, because time and again, the accoutrements of drag are always slapdash afterthoughts with her and that, to us, indicates a fundamental misunderstanding of the art of drag. The look is everything. Everything follows from that look: persona, body language, performing style. It’s why the pimp and ho standup was her strongest moment. Because the look was fully realized and told the story of the character. She probably doesn’t care about our opinion, but if she really wants to stay in drag, she should develop that pimp and ho bit and make it her whole persona.

Previous post:
RuPaul’s Drag Race: Singing Dolls Next Post:
All On The Line with Joe Zee of ELLE Magazine