Talking About Mad Men, "The Suitcase" 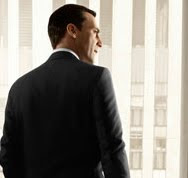 Just in case you were dying to hear more of our opinions.
Minions, we were honored to be invited back to the “Ryan and Ryan” podcast, hosted by Maureen Ryan and Ryan McGee, to discuss in nerdy detail everything about the last episode of Mad Men, “The Suitcase.” 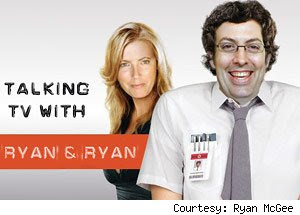 Maureen, or Mo, as everyone calls her, was formerly the TV critic for the Chicago Tribune, but saw the writing on the wall and realized print TV critics were a dying breed, so she set sail for the internet and found a new home as the lead TV critic for AOL.com’s TV Squad. Mo is very simpatico with T Lo because anytime we write about a show, whether it’s Lost, V, Glee, or Mad Men, we’ll check out Mo’s review afterward, only to find out that she wrote almost exactly the same review we did, liking the things we liked and criticizing the things we criticized.

Ryan McGee wrote about Lost on Zap2it.com the way we write about Project Runway here; that is to say, obsessively and in great detail. He continues to write about TV at his own site, Boob Tube Dude (a name we wish we had thought of). He is prolific in his TV writing to the point that we find ourselves hoping he has a really comfortable chair and occasionally takes some time to do some yoga stretches because anyone who watches that much TV needs to take care of himself. Ryan, get some sun. His writing is conversational, insightful, and highly approachable, as if you were sitting next to him at a bar, talking about what you saw on TV last night. They are both two of our favorite TV critics and if you haven’t bookmarked them, you’re missing out.

Enough ego-stroking, here’s what you’re gonna hear: Tom’s annoyingly nasal voice and rapid-fire delivery as he talks over the two Ryans (but not into his microphone), never letting them get a word in edgewise. You might have to slow this one down to understand him. The two Ryans have great speaking voices and Tom sounds like a Hanna-Barbera character. In anticipation of the question, Tom is the TV guy and Lorenzo is the fashion guy (which is why we started a blog about a fashion reality TV show), so Lorenzo sits these sorts of things out to give Tom the time to shoot his mouth off. We chatted about the Peggy/Don relationship, how the Allison storyline served as a prelude to this episode, how the changes of the sixties are affecting these characters, and whether or not Roger is going to survive the decade, among other things.You can check it out here on Mo’s “Stay Tuned” page at TV Squad. The Ryans do two podcasts every week, one Mad Men-related and one that’s a general TV discussion. You can subscribe or listen to all of them here.