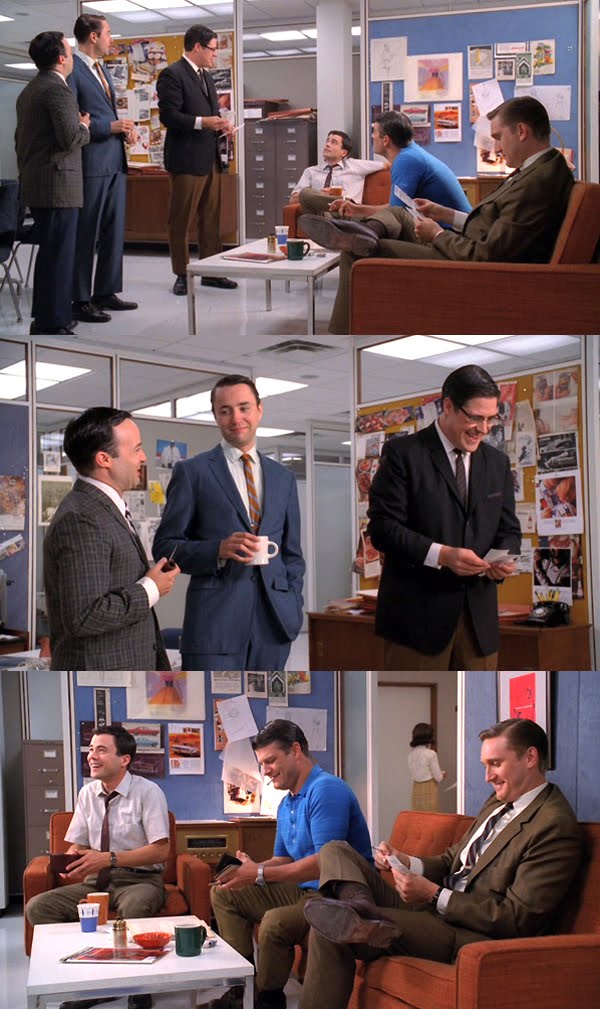 Nothing could illustrate the wave of change that’s coming in men’s fashion than these shots. In a couple of years, they’ll have the option of wearing bell bottoms and Nehru jackets, wild paisleys and wide ties. For now, you can see how the choices in menswear are increasing. The old SC offices were a sea of skinny ties and grey flannel. Here, we see Ken and Pete in their signature suit colors, brown for Ken and that ’60s bright blue for Pete. As account men, they’re not going to have the options that the creative staff have. Joey’s in a short-sleeved dress shirt – something that reads as hipster or nerdy to modern eyes – Danny’s in a sports coat, as is Harry. Danny’s working a ’60s plaid and Harry’s working those gold pants. And finally there’s Rizzo, who gets way more leeway than the rest of them. He sure likes to wear his clothes tight. 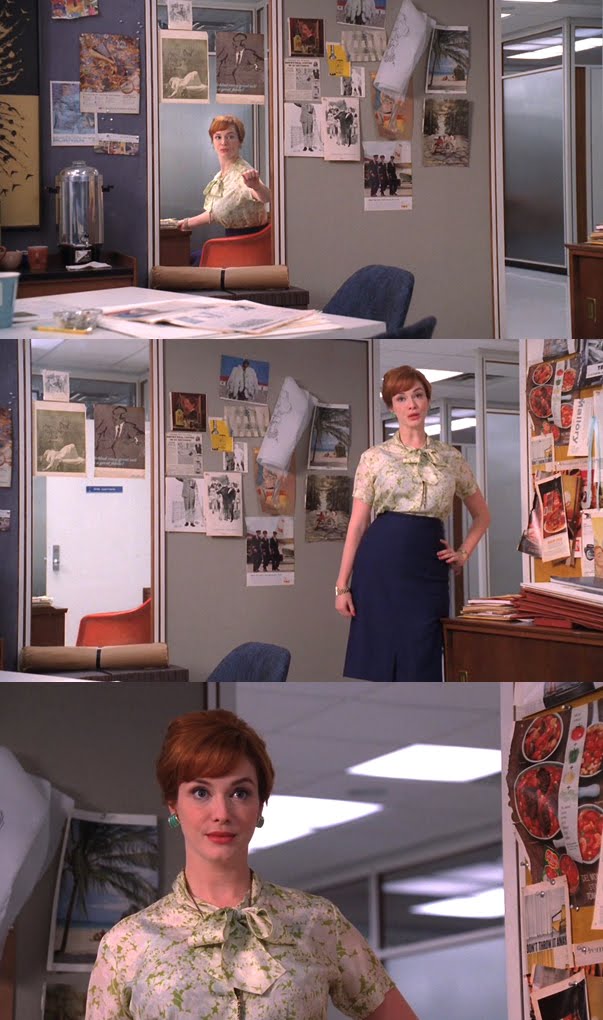 We only saw it for a split second, but here’s Joan’s outfit, a combination of new elements and classic Joan style. Of course it’s form-fitting. That’s never going to change. And the pussy bow is of a piece with her longstanding penchant for frippery around the neck. What’s interesting is how high-waisted that skirt is. She doesn’t normally wear them that high. It flatters her. On the other hand, that blouse is in a typically ugly mid-sixties print in a color combo that doesn’t do much for her. We all know that Joan isn’t going to be rocking the mod looks because she’s stuck in her ways and besides, she’s getting a little old (by the standards of the day) to be wearing such youthful clothing. We’re wondering if – and it pains us to ask this – Joan will be looking increasingly dowdy as time goes on, much in the same way Betty is.

How’s that for a snapshot of middle-class finery for the period? Check out how poorly the men did their ties, as well as the ragged-looking cuffs on Mark’s shirt. These are people who are not used to dressing this way. Anita’s outfit is probably more than a couple years old. It’s slightly out of style. The roommate looks like a major bitch, but we have to say we LOVE the cat-eye glasses. Did anyone else in our generation call them “Batgirl glasses” when they were a kid? All the kids we knew used that term.

Is it us, or is Trudy very pregnant all of a sudden? It’s only been about 3 months since she told Pete and while pregnancy tests were administered a lot later than the instant versions we have today, she really can’t be more than 5 months along, can she? And isn’t that kind of large for such a small woman with her first pregnancy?

Anyway, it’s interesting to compare this fairly stylish maternity outfit with some of the hideosities Betty was wearing a few years before when she was pregnant with Gene. There are reasons for that. For one, this is an outfit for a night out on the town. Most of the maternity wear we saw Betty in was of the housewife variety. In addition, Trudy is a bit younger than Betty and lives in the city, which means that she’s slightly more stylish than the former Mrs. Draper. And finally, this is her first pregnancy, which means all of her clothes are brand new and of the moment, unlike Betty, who was pregnant in (by our calculations) 1954 and about 1957 before her third pregnancy in 1963. Like most women, Betty recycled her old maternity outfits. 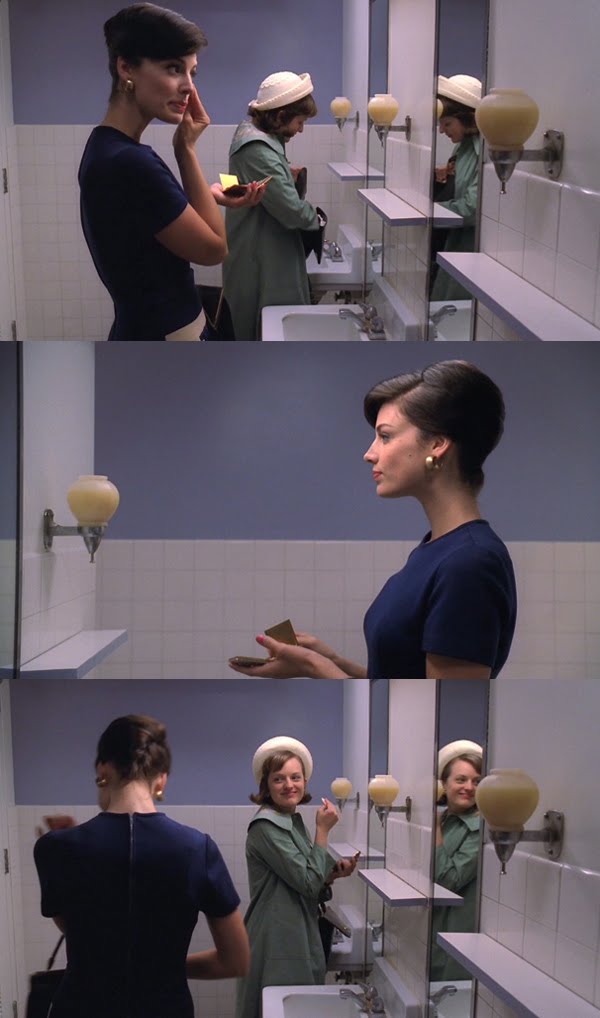 LOVE MEGAN. Like Joan, the girl’s just got presence. She only needs one or two lines to really establish the character. This is essentially a Joan dress: clean lines, short sleeves, form-fitting. But because she tends to be less fussy in her dressing (no brooch, no scarves, no pen on a chain) and because she doesn’t wear her clothes quite as tight as Joan does nor does she have Joan’s ’50s body, it tends to look a lot more modern and youthful on Megan. 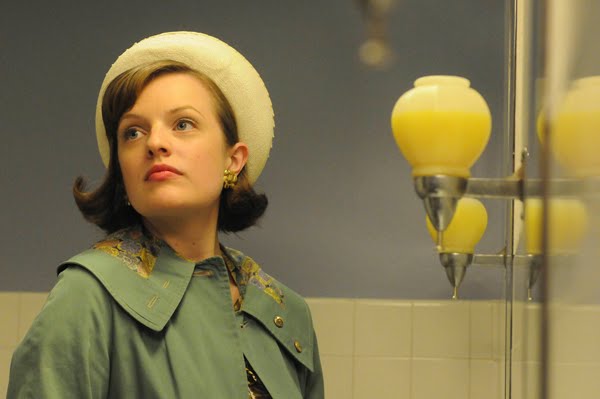 That is the best photograph of Elisabeth Moss we’ve ever seen. LOVE the “That Girl” hat. 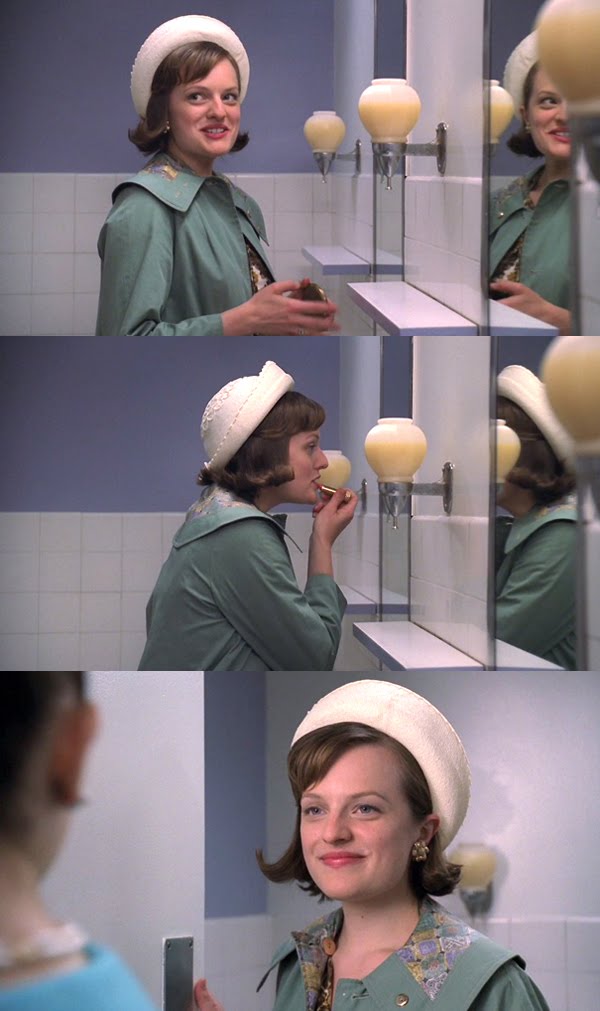 Peggy’s clearly making a decent salary because her clothes look more expensive, she seems to have a bigger wardrobe (not as many repeats as in the past), she seems to have a largely new wardrobe, and her jewelry is a little more showy. Check the earrings. We also noticed that she’s got a little more eye makeup on; a slight step towards the wilder makeup styles just making their way onto the scene.

We don’t love this coat, mainly because it’s a perfect example of something that looked stylish 45 years ago, but looks a little matronly now because some women wore coats like this for the next 30 years. Still, it’s got a little kick to it, with the oversized collar and the floral print.

This scene was important because it showed three women at different points in their lives, all assessing each other. The mother, the maiden, the crone. To tie them all together as well as to show their differences, they’re all dressed in wildly different shades of blue. And of course, Peggy has to be the one most separate from the others, since her coat is really more of a blue-ish green. 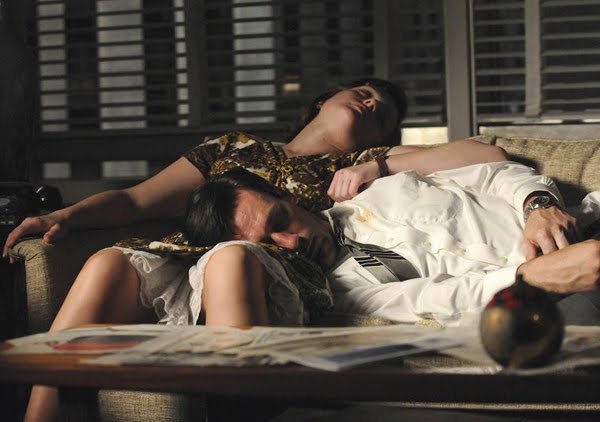 This is a highly unusual dress for Peggy in that she almost never wears florals. It took us a while (and a couple viewings) to figure out why it stood out so much to us. This is basically an Anna dress. Anna favors the dirndl-style silhouette; tight bodice, full skirt, short sleeves, and as we pointed out a couple of weeks ago, she tends to dress in naturalistic themes: florals in earth tones. This is about Peggy taking over for Anna. This is about the girl who gave away her baby being maternal toward the man who never knew his mother. 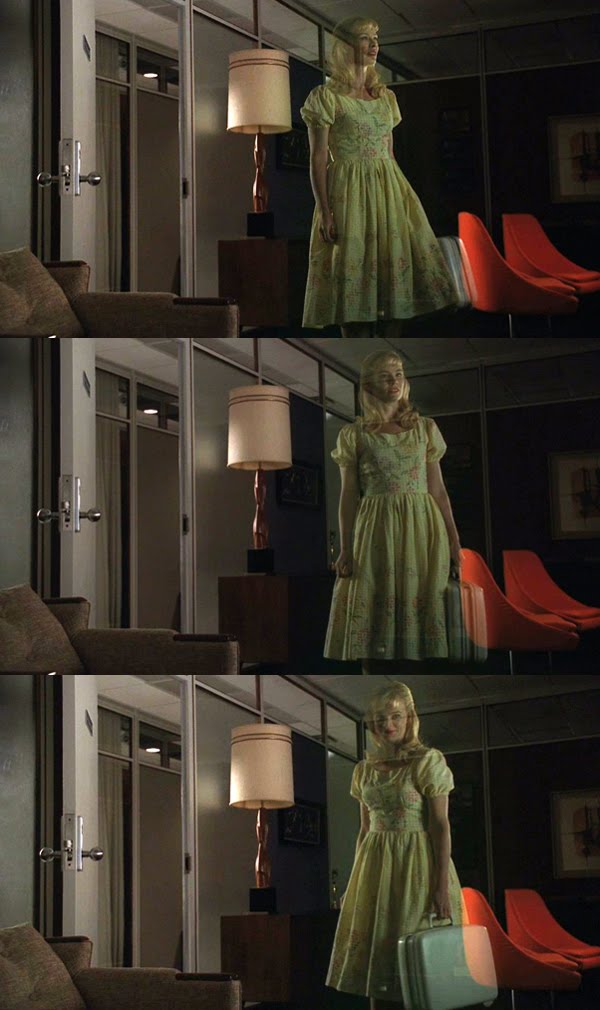 A lot of people disagreed with us when we said this scene was a little cheesy. While it’s true that Don has had visions in the past, they were mostly memories and they were staged in a far more natural way. No transparent figures fading away. Last season when he basically watched his own birth in his kitchen, it was shot so that it literally looked like it was happening in his kitchen. We don’t mind that Don had a vision of Anna, whether it was an alcohol-induced hallucination or a supernatural event. Story-wise, that works fine for us. We just didn’t like the way it was shot.

Anyway, what’s notable here is that Anna’s wearing a typical Anna dress in an atypical Anna color. Like we said, she favors either earth tones or washed out beachy hues. Here she’s in a bright yellow. And who else in the cast favors yellows? Peggy. We think part of this scene was about Anna passing the torch, letting Don know he’ll be fine because he found someone else who knows everything about him and still loves him.

We’re getting a little teary-eyed thinking about it.