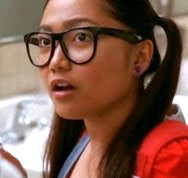 “I didn’t send her to an active crack house.”

Our one fear with the return of Glee was that it was going to become a victim of its own hype. There’s nothing worse than a hit show that acts like it’s a hit show. They become way too self-referential (not to mention reverential), the result of which is always that the show loses everythin

g that made it a hit in the first place. We’re happy to report that with the premiere episode of its second season, Glee has mostly avoided this fate. In fact, in typical Glee fashion, they met their detractors head on in an opening sequence that demonstrated how self-aware they really are down at Glee Headquarters, as Jacob turned crusading blogger-reporter and confronted the club on “GLEE’S BIG GAY SUMMER.” “Your glee club song selection sounds like a drag queen’s iPod.” “How has life changed since the birth of your bastard child?” “When are you planning on making your triumphant return to the Shire?” and finally, the most biting criticism of them all, “When will you Glee clubbies accept the fact that people hate you and think you’re nothing but a glorified karaoke club designed to make the inventors of Auto-Tune millions of dollars.”

Now, you could argue that the show is in fact becoming too self-referential by opening up

the second season this way, but they got it out of the way quickly and moved right on to showing us the new status quo. Rachel and Finn are still together, Tina and Artie aren’t. Coach Tanaka has been replaced by the formidable Coach Bieste, which has prompted some budget-slashing by Figgins. Sue and Will are angered to find out that the money’s coming out of their respective team budgets, which prompts them to gleefully form an alliance to take Bieste down.

It was nice to see the writers didn’t forget that Sue and Will ended things on a mostly friendly note last season. The major issue with the writing on Glee has always been that the characters act inconsistently from episode to episode. What really worked about this opening episode is that it felt like the characters had all progressed naturally from where they left off. Of course Quinn would want to regain her status as head cheerleader and of course Santana

was going to have to pay a price for taking her spot. Of course Artie would not know how to treat a girlfriend and Tina would jump at the chance to move from wheelchair boyfriend to football player boyfriend. Of course Will is still a shamelessly immature teacher and as much a bad example to his kids as a good one. Of course Puck isn’t over Quinn (and of course he got a vasectomy). Of course the glee kids are still outsiders in the school. Of course Rachel is still self-absorbed and manipulative. Sure, the plot points are awfully familiar (budget cuts! rivalry! teachers acting like assholes!) but how far do we want Glee to stray from what works for them?

Anyway, New Directions comes up with a plan to get the uninterested student body to think they’re cool again and join the group.

We have to say, that wasn’t the best recruiting technique. Nothing wrong with “Empire State of Mind” as a song, but the group came off a little goofy in this one. And while it would be nice to have an actual black kid doing some of the rapping on this show, Artie can continue to do the heavy lifting on that one since he does it well.

Still, Rachel noticed Sunshine Corazon in the crowd, a Filipino student with a musical bent. They meet up in the ladies room and Rachel finds to her horror that she hasn’t discovered a backup singer for the group, she’s accidentally discovered a new soloist:

THAT one’s heading to the iPod ASAP.

Meanwhile, Finn has discovered a possible protege of his own and convinces the Bieberiffic new kid Sam to hang out with the glee boys and show them what he can do.

Obviously, we’ll be hearing more from Sam. He makes a better addition to the group than Sunshine does because between Mercedes and Rachel (and a little bit of Santana) they’ve got the diva voice locked up. The group really doesn’t have a guy with that kind of power, although Puck and Artie can carry a tune. For now, Sam is too worried about being the new kid and doesn’t want to jeopardize his newly achieved quarterback position.

After sending her first to a crackhouse, Rachel relents and sets up an audition for Sunshine, which Sunshine turns into a massive “Fuck you” to Rachel by bringing the house down.

You don’t fuck around with the divas. That was amazing. But Rachel really blew it and Sunshine jumped at the chance to join Vocal Adrenaline, which means their opponents have gotten that much stronger while New Directions gains no new members at all. Rachel decides to sing in her head about it.

Honestly? We’re probably going to get in so much trouble for saying this, but we hate that song. Sure, Lea Michele has the voice for it and she does a good job, but it’s such a sappy, melodramatic Broadway cliche of a song. Still, they managed to work in a little something for everyone from a song genre point of view, so if the theater queens got a woody over this rendition, good for them.

Anyway, it was a fun hour showing that the show, for now at least, is still in perfect form. We had some fears and misgivings (especially when we look at the massive and still growing guest star list for the season) but we’re psyched for Season 2.

Okay, let’s wrap this up with random quotes and random thoughts:

“My eyes are up here, Jewfro.”

“People thought I went on vacation but actually I spent the summer lost in the sewers.”

“First of all, female football coach, like a male nurse, sin against nature.”

“That’s a steer with 6 teats and no oinks.”
“That doesn’t make any sense.”

“Dude your mouth is huge. How many tennis balls can you fit in there?”

“They got my mom a condo and a green card!”

“My boss says if you don’t pay for them, I have to, which means we reuse my kid’s Pampers. For another week.”

* BRITTANY! We missed Brittany the most, it seems. To add to her line about spending the summer lost in the sewers, we have to place her admission that she wants to touch Coach Bieste’s breasts and her robotic “Stop the violence” in response to Quinn and Santana’s bitchfight in the hallway.

* While it was nice to see so many members of the club get a moment, this episode was appallingly Mercedes-free. She better get a moment next week.

* It was also surprisingly Emma-free. We missed her, but we can understand why they didn’t try to shove her in with so much else going on.

* We don’t mind having to look at Cheyenne Jackson at all, but we’re really looking forward to seeing him strut his stuff as the new coach for Vocal Adrenaline.

* We get why they’re putting Finn in this position from a story telling perspective, but considering Bieste and Schu made up at the end, his exile from the football team doesn’t really make a lot of sense.

* We loved seeing Quinn get her moment to strut down the hallway in her uniform, even if Santana did ruin it for her. She worked hard to get that status back. We’re loving her relationship with Sue, which is based on mutual respect, mutual bitchiness, and a good understanding of each other. They’re fun to watch.

* Speaking of Sue, it seems to us that they’re finally nailing her down and giving her some consistency. She was truly hurt and disappointed with Quinn for getting pregnant, just as she was furious at Santana for getting a boob job. She’s horrible to these girls, but she’s consistent in that she’s trying to turn them into confident actors in their lives and that’s not such a bad thing to teach a teenage girl, even if she is a bit of a sociopath in her methods.