Slap on those brooches and let’s get to reading, ladies. 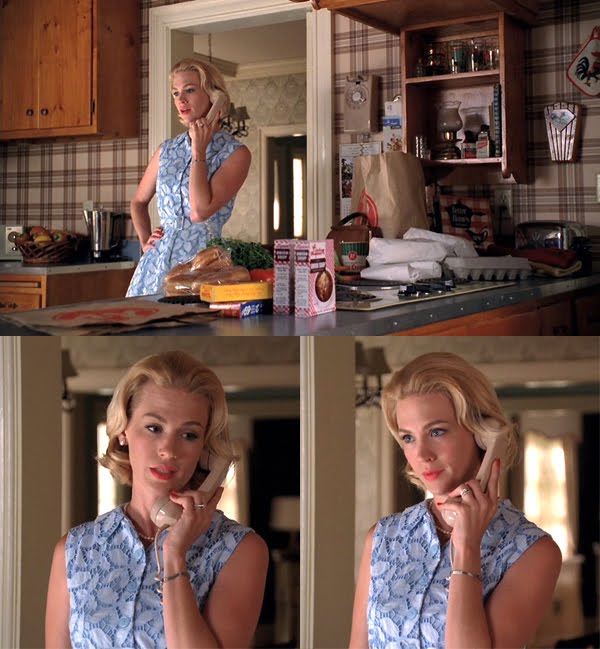 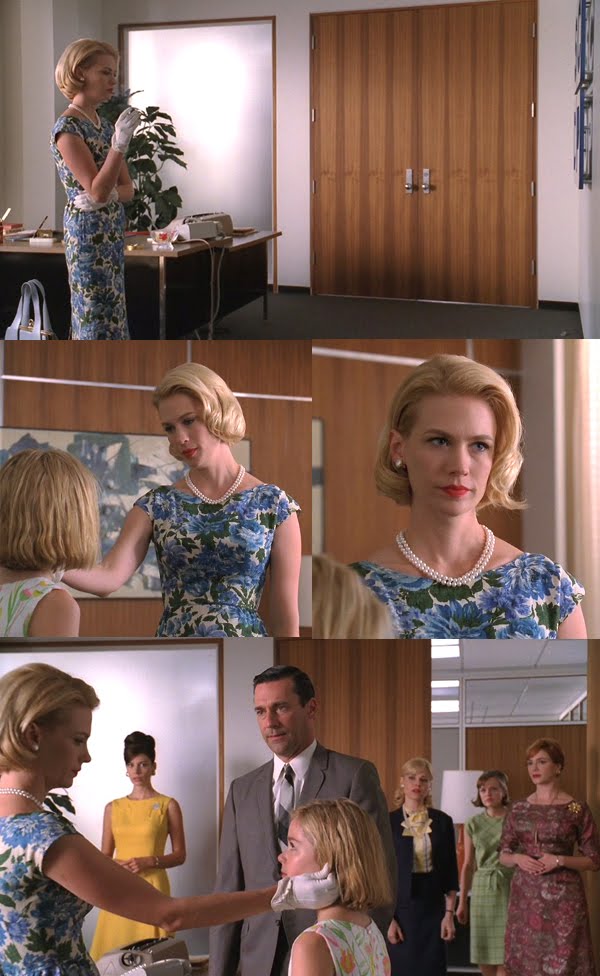 Betty working her icy blues again. It’s an interesting dichotomy, the floral themes rendered in icy colors. If we had to pick two surface qualities of Betty that define her, we’d say it’s femininity and coldness. How better to represent that than frozen flowers?

Notice that the colors in Sally’s dress; the pinks, yellows, and greens; are all picked up in the outfits of the other women in the scene, except for Betty. The other woman have a connection to Sally at that moment through her pain and despair. Betty seems to have no connection to her at all. 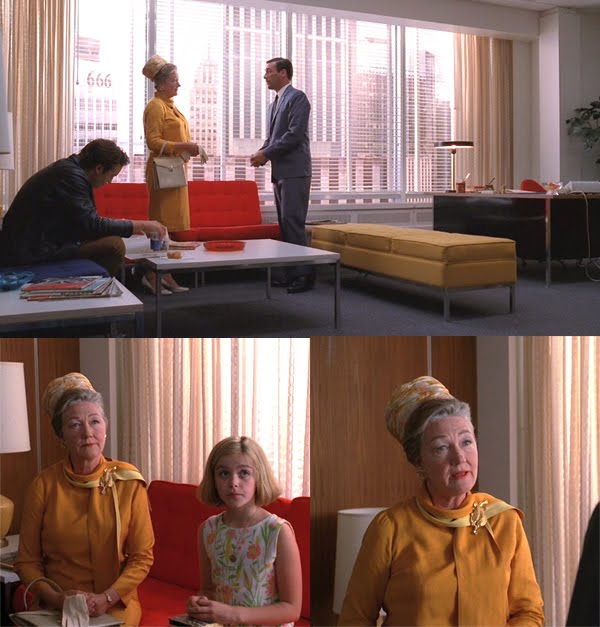 She was kind of a bitch, but we have to say, the old broad looked pretty damn put together. 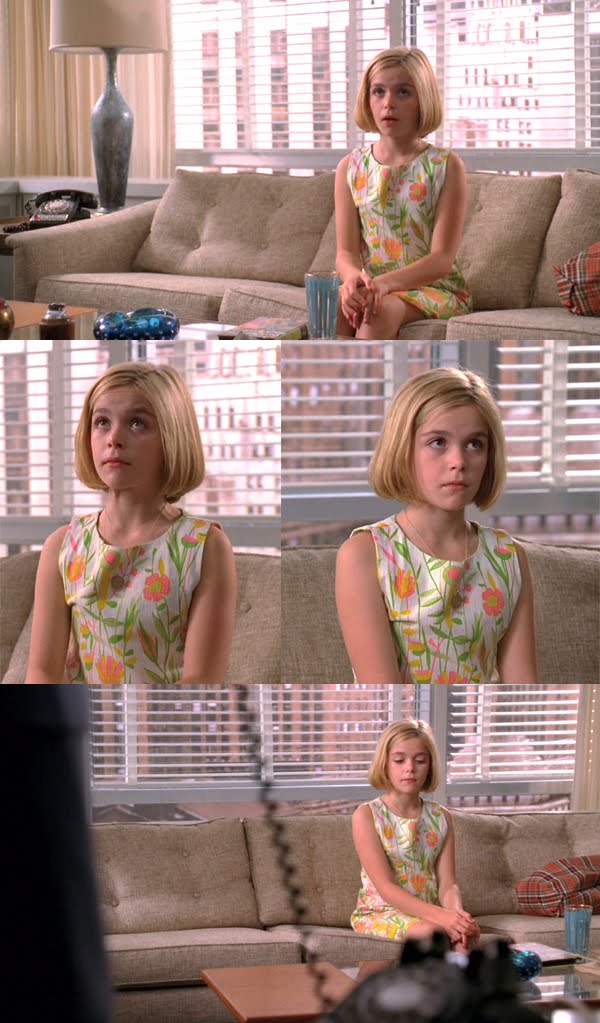 Rather than subject you to more long-winded analysis, we’ll let a picture say a thousand words: 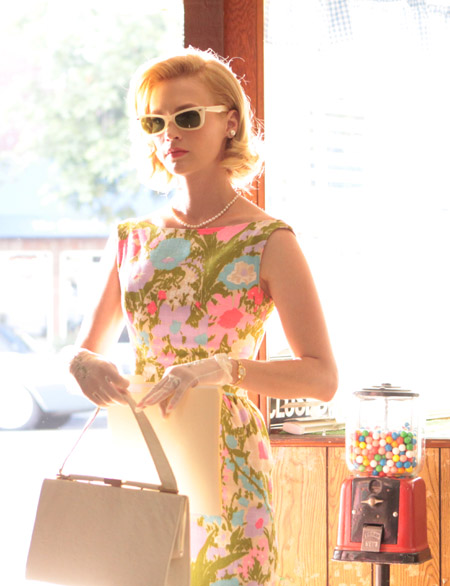 Poor Sally. She’s gonna fight becoming her mother for the next 30 years. 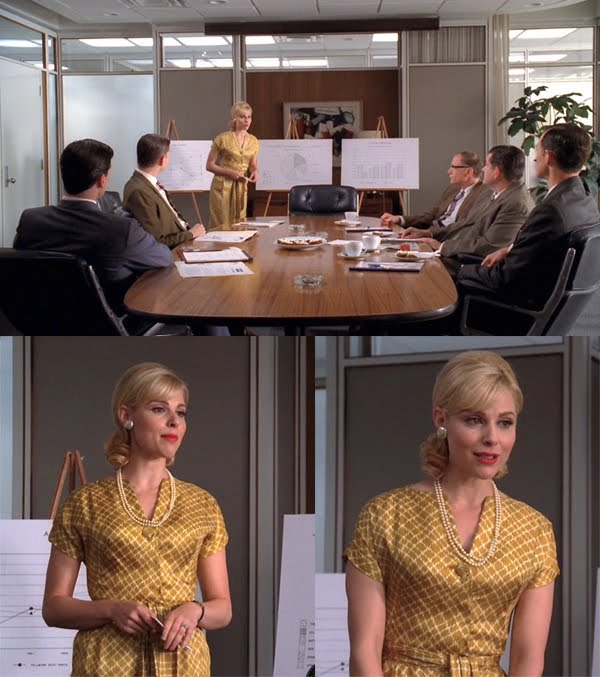 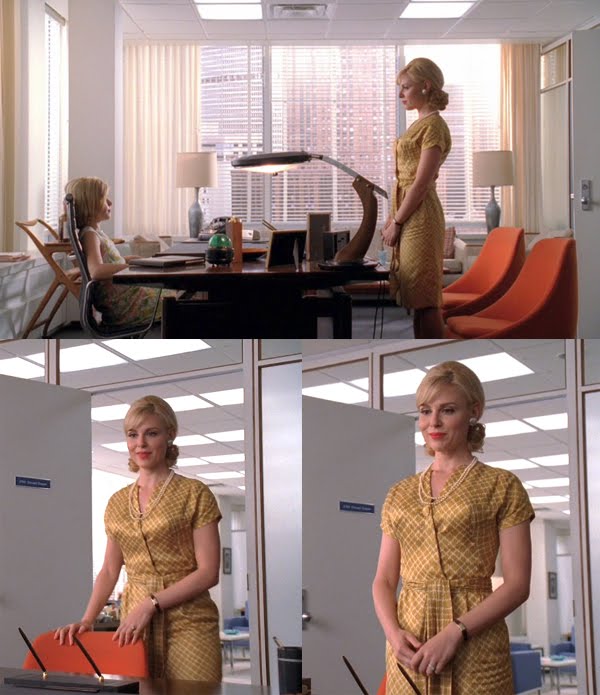 This may be the most traditionally feminine thing we’ve seen her wear in the office. Perfect for those “forced to be a surrogate mother against your will” moments that pop up so often in a working gal’s life. The gold makes her look warm and the relatively simple lines with the sash and the pearls give her a much softer look than she normally wears. It’s not quite a Betty look, but it’s pretty far away from what we normally think of as a Faye-in-the-office look. 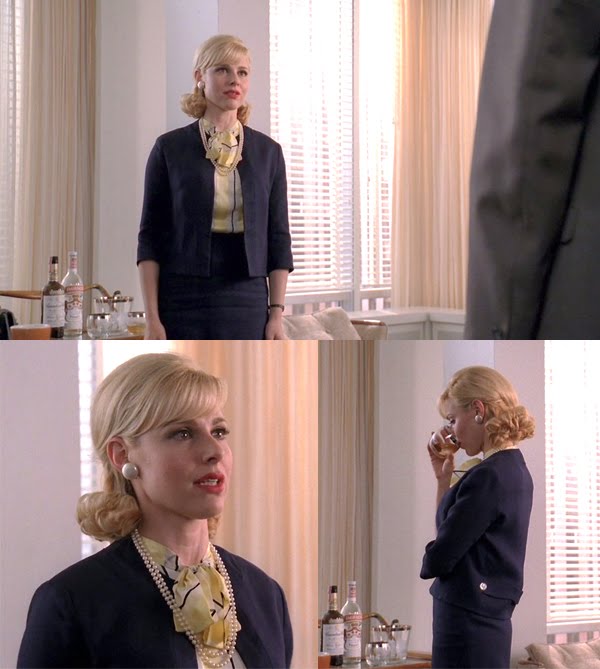 Like so. In fact, she went from her softest office look to her hardest. When it came time for Faye to shrug off the surrogate role she’d been forced into, she was back in her office armor. A dark suit with a couple light feminine touches is Dr. Faye Miller’s go-to for any business or business-like situation. Here, there’s an air of defiance to it, as she stands up for her choices. What better way to illustrate you don’t have the mommy gene than by dressing up as business-like as you possibly can? 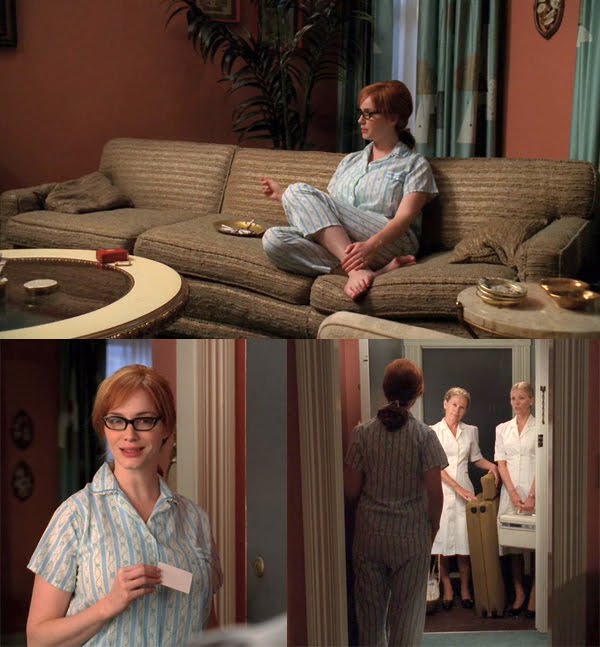 From a style point of view, there’s not much to say about this look except that she looks adorable. We wonder how long she’s been wearing glasses and we pray a pair of Ida Blankenship cateye frames aren’t in her future. 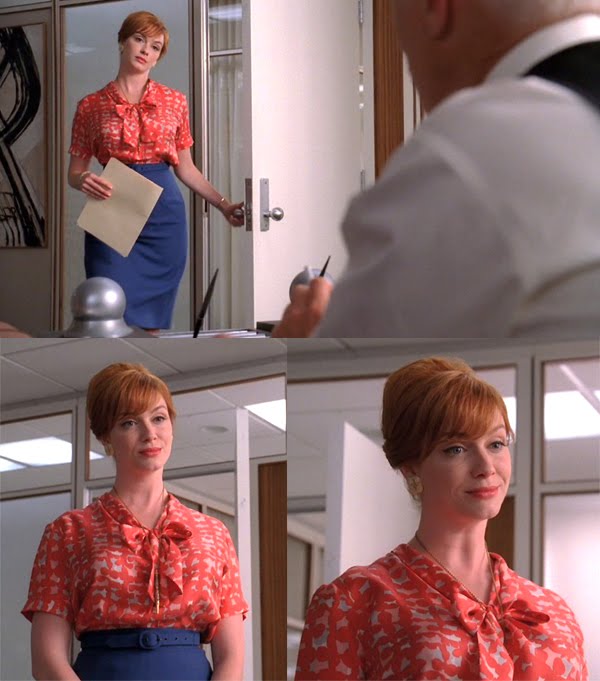 We think part of the reason the set for Roger’s office was designed in such an un-Roger like mod minimalism is because most of the major scenes set in the office consist of him and Joan talking. Since Joan is always a column of saturated color, she always stands out boldly against all that white.

Cute little belt on this skirt. That’s a new detail. These short-sleeved blouson tops are not her friend, although we do like the print here. 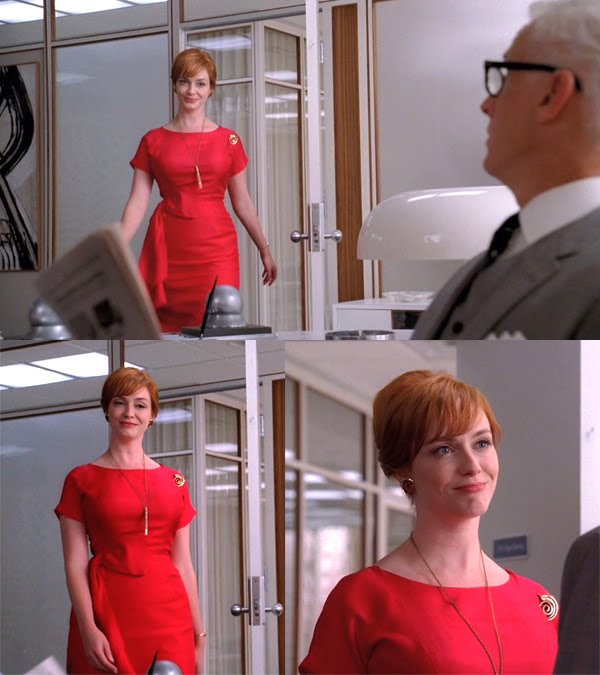 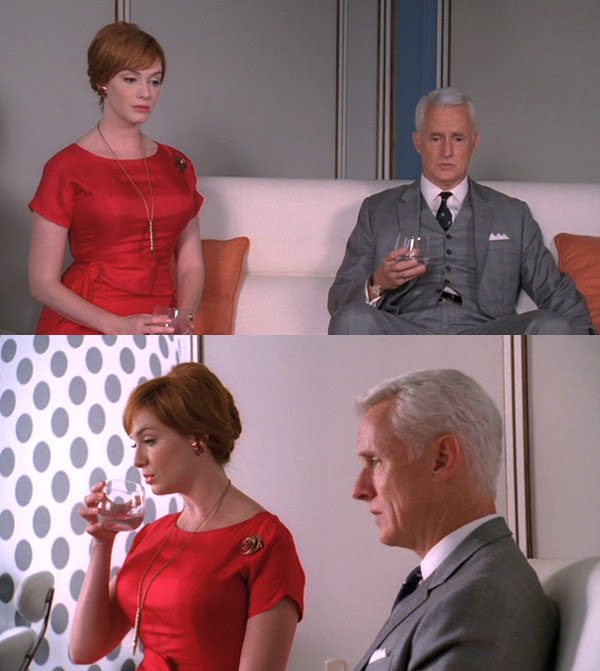 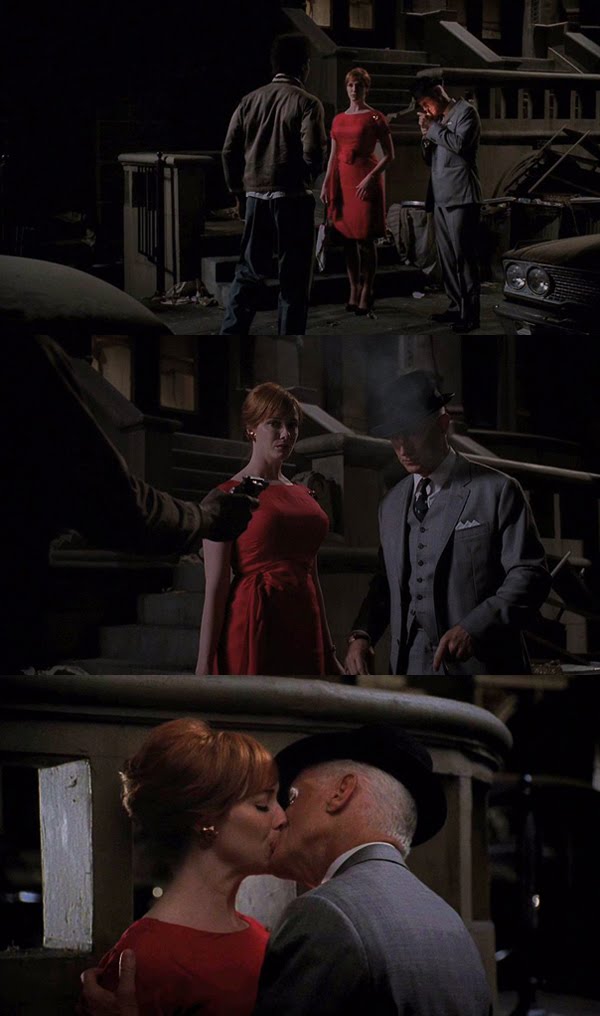 For the longest time we couldn’t place this dress. It looked really familiar to us but we couldn’t remember any scene where she wore it. And let’s face it, we’ve devoted a totally unhealthy amount of time documenting her wardrobe. Then it hit us. This looks very similar to a dress she wore for some promotional shots for the show all the way back in season one: 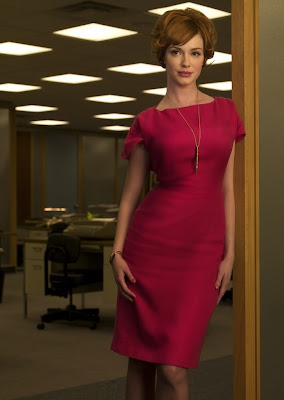 It’s not the same dress. The neckline is slightly different and the old one didn’t have a sash. But it got us thinking about how the dress in this scene feels like something Joan would have had in heavy rotation 4 or 5 years ago. Even if it’s not an old dress, it feels like one. Joan has slowly been finding herself back in Roger’s orbit and thinking that the old days were better than what she has now. 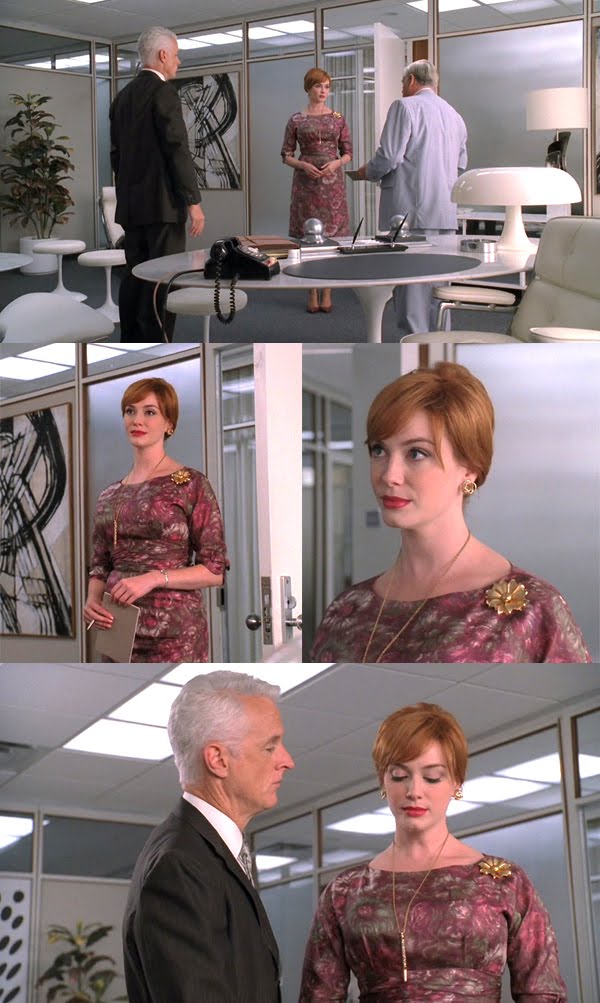 And what better way to illustrate Joan’s tumultuous feelings than by putting her in a busy purple print? It’s a fabulous dress but it’s definitely in the “mature” section. What’s interesting here is she’s wearing what looks to be an A line skirt and that’s definitely new for Joan. A mature-looking dress with a newer and more modern detail. Kind of sums up Joan’s predicament of being considered old before she’s actually old. 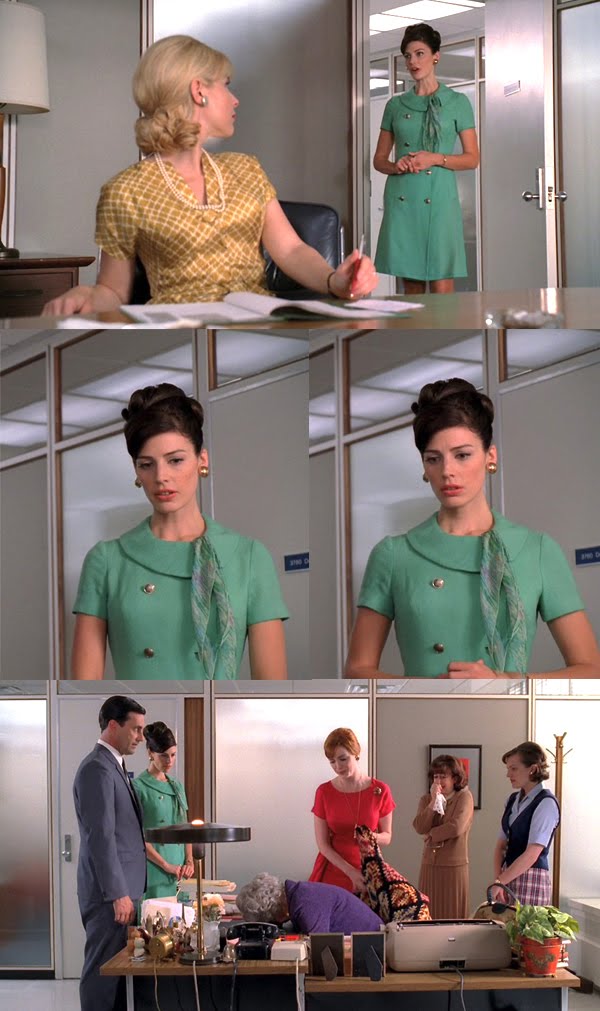 The thing about Megan’s look is that she’s almost always a column of one brilliant color, like Joan but with a totally different feel to it. Megan’s colors are almost crayon-like. None of the reds and pinks of Joan, her colors are cheerier and less sexual, almost child-like. 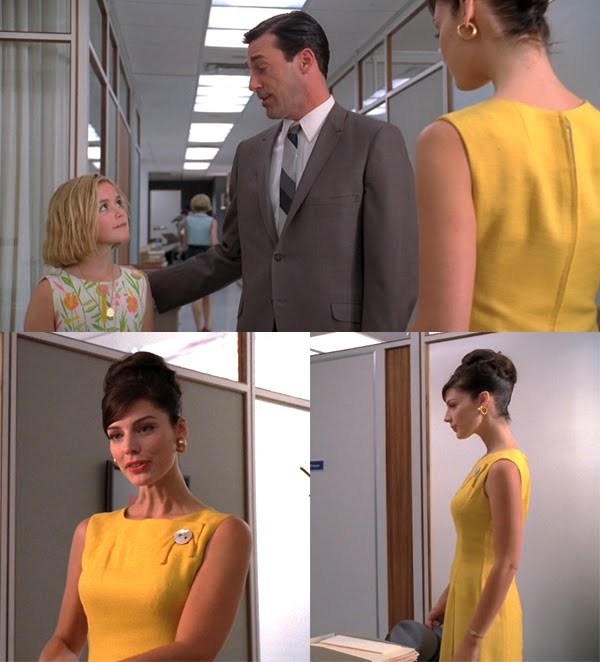 Case in point. You can’t get much cheerier than that. There are obvious references to Joan being made with Megan; the up-do, the bright, yet efficient outfits, the general fabulousness; but Megan definitely has a different quality to her. When Jane was filling the role of Joan Jr., you could see the similar goals and methods at play. With Megan, there’s no sense that she’s on a husband hunt or using her looks to get things. She’s still a bit of a cipher, but she’s being dressed so that we notice and pay attention to her.

God bless Peggy. Sometimes, like when it’s hot out, she just can’t be bothered.

Although we have to say she looks really cute here. In a lot of ways, this is classic Peggy: a plaid skirt with a vest and blouse. What keeps this from looking like the literal Catholic schoolgirl outfits of yore is that this time, Peggy’s got some money to spend. Her entire wardrobe this season has been upgraded and you can see the higher quality in the clothes she’s wearing. But just like a real person, that doesn’t mean her style changed all that much. She definitely looks better this season than any other, but her basic style hasn’t changed that much. 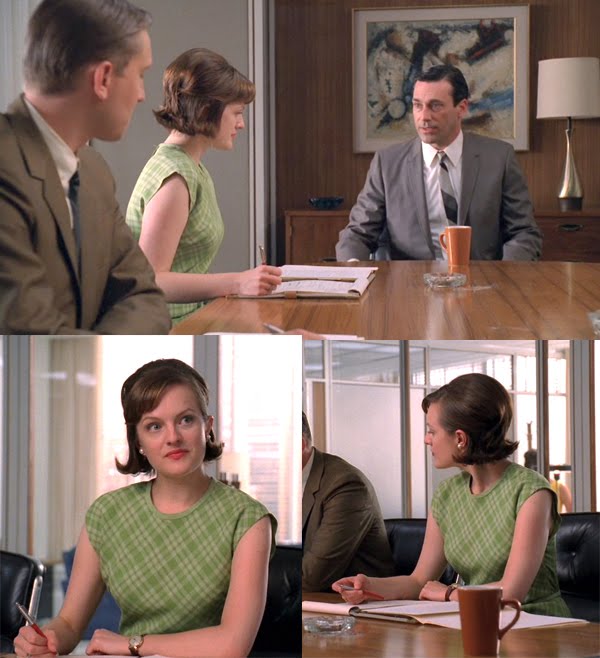 When they need to make a point about Peggy’s naivete or vulnerability, they take her out of the snappy little work outfits and put her in something girlish and sweet. This is a really cute little number and looked adorable accessorized with the gloves and hat later on. Peggy really is a bit naive and narrow minded when it comes to thinks outside her career ambitions; like the fact that there’s a historic civil rights movement going on and that working for corporate America means working toward maintaining the status quo. It’ll be interesting to see where this awareness is going to take her. She was deeply disturbed by it but Peggy has a talent for suppressing things she doesn’t want to think about. 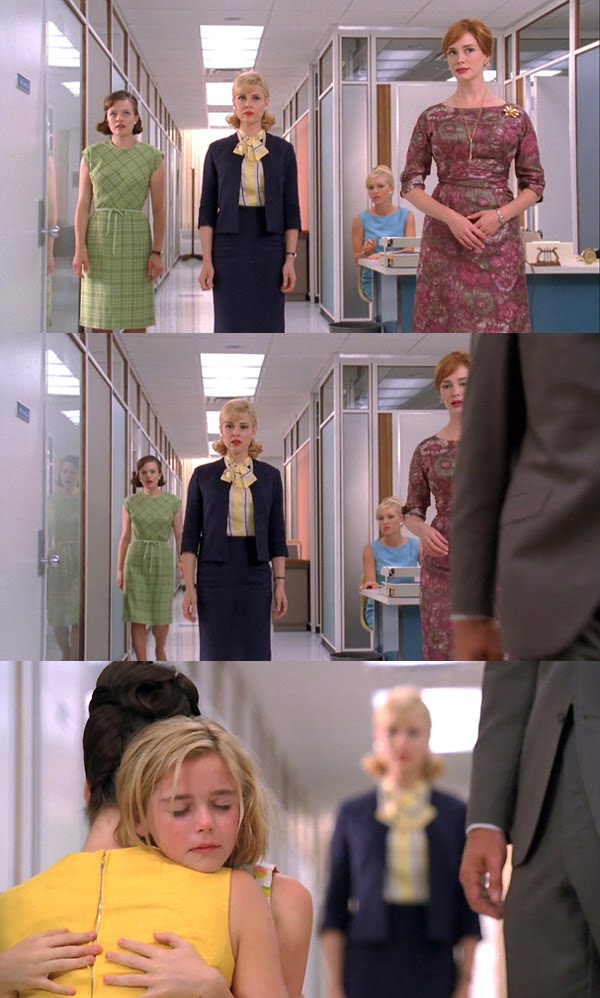 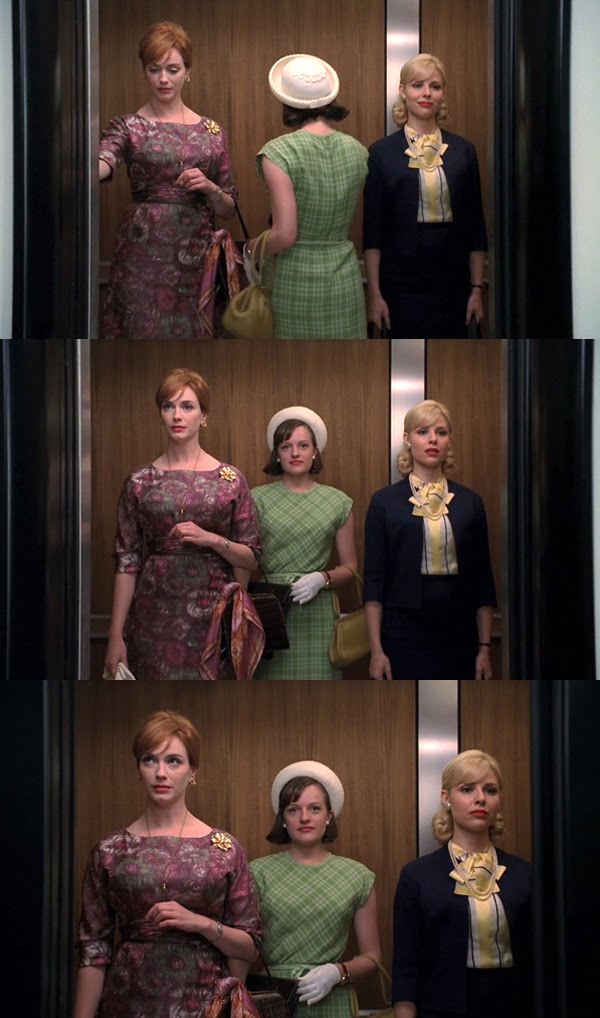 Look at their differences and what each outfit is saying about them. They are all three career women in their own way. Faye has arguably worked the hardest out of all of them to get where she is, since she pursued an advanced education. Her look is the most business-like of all. Peggy wandered into her career and found that she both loved it and was good at it. She’s still a bit wide-eyed about what it means on both a personal level and an ethical one. She is dressed the most youthful; the most “girly.” Joan used her looks to make her way and now that the world considers her looks outdated, she’s struggling and possibly falling back into old romantic habits. She is dressed the most…romantically, is the word we’d use. Swirling florals of pinks and purples that hint at her confusion and the depth of her feelings.