Kittens, we tried. We really did.

We spent a good hour taking turns staring at the screen and wondering how we were going to write up this episode. See, the problem is, we’re having a hard time coming up with anything more than “SQUEEEE!!!” and “ROFLMAO!!!!!” As you can see, we lapse into text speak when we’re excited. 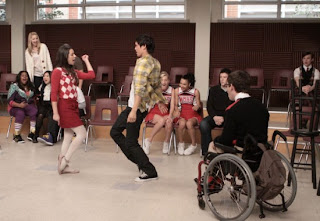 Can you blame us? Maybe we were just hungry for the return of something big and bitchy on our TV, but we really think this might have been the best one yet. The plot silliness from previous episodes has been almost completely jettisoned to be replaced by new plot silliness. But we don’t actually mind it. For the most part, everything everyone’s doing makes a certain amount of sense. Sue comes roaring back like we knew she would and she’s still got Brittany and Santana under thumb with the possibility of taking over the vacant head cheerleader spot dangled in front of their faces. Will and Emma act like adults for once and quickly realize that entering a relationship right now is a really bad idea and Rachel and Finn, like teenagers are prone to do, put up every single roadblock they possibly can so that maximum drama is achieved. 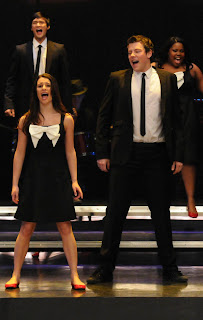 percent behind them. If they ran into each other’s arms with no problems, that couldn’t possibly be more boring. It makes sense that Finn would run away from her weirdness and ‘relationship calendars” just like it makes sense that Rachel would get her head turned around by someone who responds wholeheartedly to her drive and her talent, as opposed to Finn who always seems confused and scared by it. Besides, we liked the new tension displayed in the Beatles’ “Hello” number.

And Jesse St. James. God bless that little gay. “Your rendition of ‘Don’t Rain on My Parade’ was flawed. You totally lacked Barbra’s emotional depth.” With his reveal that he hangs out at the library to catch up on celebrity gossip and “lifestyle tips, ” we can’t wait until Kurt gets a hold of him. Poor Rachel. If ever there was a girl destined to date one gay man after another, it’s her.

With the addition of Jesse and IDINA MENZEL, BITCHES! – as Vocal Adrenaline director Shelby Corcoran, the show has passed a very important test. Shows with long-term success always demonstrate an ability to add new and compelling characters to the cast. These two have a lot of possibilities. Plus, how about that makeout session? We were taking notes and when we got to that point we scribbled “OHMIGOD!!!!” underlined and all-caps, like a 14-year-old girl writing her Twilight fan page. It’s kind of weird that Will is so attracted to her since she looks so much like Rachel and acts so much like Sue Sylvester: “You want to look so talented it’s literally hurting you. I want a look so 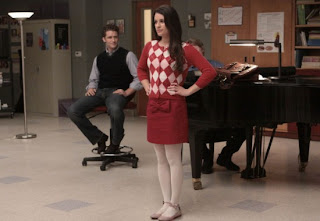 optimistic it could cure cancer.” Tell us that didn’t sound like it came right out of Sue’s bullhorn.

And speaking of Sue, she was back in fine form last night, blackmailing her way back into her job and terrorizing everyone around her with offensiveness and threats. “Hey buddy. Get a haircut? Looks awful.” “Just dropping off a mocha for my maharishi.” “You no longer confuse me with your she-male looks.” “You may be two of the stupidest teens I’ve ever encountered – and that’s saying something. I once taught a cheerleading seminar to Sarah Palin.” This would be a very different show without her and she better get her (Emmy) due before this all over.

Thankfully, the best lines of the night weren’t all Sue’s. It’s nice to see the writers spread it around to give everyone a moment:

“He pulled a Jessica Simpson. You know, lost his fiancee, gained 40 pounds, and stopped showering. And everyone acts like it’s totally normal.” 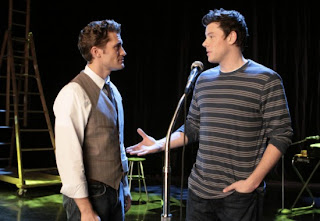 “Did you know that dolphins are just gay sharks?”

“Most of the show choir directors I make out with are gay.”

“Sometimes I forget my middle name.”

Let’s see…what else? Well, we got a lot of musical numbers. The Vocal Adrenaline version of “Highway to Hell won’t be on our i-Pods any time soon, nor will the version of the Beatles’ “Hello,” (came off a little screechy), but Lea’s version of “Gives You Hell” is DEFINITELY i-Pod-worthy. Yes, we’re just that gay. We can’t help it. The Glee soundtrack is perfect housekeeping music. You can get all your dusting done in the time it takes you to lipsynch “Bust Ya Windows.” Unfortunately, the Hulu clips aren’t working, so we can’t embed them.

Final string of things we loved:

*The Terri and Emma confrontation. We love the idea of Terri as the unrepentant bitch of the show. 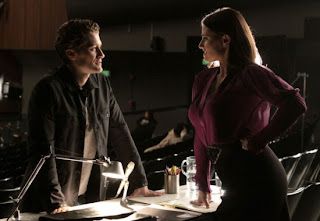 *The fact that Will’s such a dork he uses Neil Diamond for his score track.

* Of course Emma’s a virgin. She was so adorable this episode that she broke our hearts a little. We ultimately want to see her and Will together, but we’re glad the writers didn’t rush to get there.