Last night’s episode was so big, so jaw-dropping, that we sat through it three times in order to pull this post together and even then, we’re not sure if we have a handle on it. Sometimes though, you just have to stop looking for the ponderous themes of a show, sit back, and let it wash over you. Sometimes, you’ve just got to enjoy the liquor and delicatessen. Such was the case with this episode, our favorite of the season so far and one that may just wind up as a favorite of all time. Oh sure, 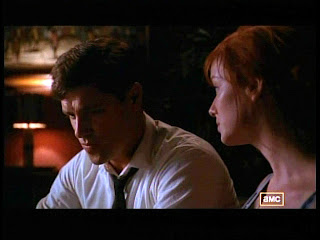 there were underlying themes of fear and anxiety, with a snake imagery motif to tie the two together, but this was also a great episode for just moving the various players around the chess board to see how they all react. Except they didn’t so much move around as they had the chess board blown up from underneath them. And the beauty of it all is that by the end, very little has changed.

The big bosses from London are coming to Sterling Cooper and once again, the office is thrown into a tizzy. We can’t decide if the date of the inspection, the day before Independence Day, was heavy handed on the part of the writers or on the part of the characters. We’re leaning toward characters, since Don voiced what we were thinking: “Subtle.” Bert and Roger sit Don down and in a manner slightly uncharacteristic of them, fill his head with a lot of ideas about a coming promotion for him via London. Don, also uncharacteristically, allows his true feelings to be known about that: he’s practically salivating at the prospect. Bert, like a jedi master of the business world, senses the tension in the Don/Roger relationship and in pure corporate 1963 style, orders them both to the barber to hash it out. They do so in a manly-man style, all aftershave and allusions. That’s about as far as either of these characters go in an emotional confrontation. Their problems with each other are about as solved as they’re going to get. At least for now. Roger, in a typical attempt to steer the conversation with smartassery and 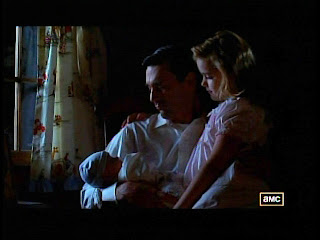 tall tales, tells the story of his de-limbed father in the coffin, which of course didn’t occur to us until the third viewing as some fairly hardcore foreshadowing of what was about to happen.

Meanwhile the Sterling Cooper secretarial pool is annoyed because their plans for sending departing office manager Joan Holloway off to her wifely reward are being compromised by the coming inspection. In a lot of ways, this was Joan’s episode and we were really treated to all the different sides of her. We got to see her in a variety of situations and in all of them, she was in control and had the upper hand at all times. Snotty Mr. Hooker tries to go head to tits with her and she manages to cut him down by embarrasing his very British-ness with her acid reference to the Profumo scandal. She makes sure the office is a buzz of activity when the British officers of the company arrive and she turns on the Holloway charm to greet them with restaurant reservations and tickets to a Broadway show. She even managed a sisterly moment with Peggy where we got to see two characters lay it a little bare for each other, with affection and mutual respect. Of course, this all pales before her triage skills, but we’ll get to that in a minute. Let’s talk about her marriage first.

One of the things the show really gets is that people aren’t always consistent or easily pegged. By all our modern and yes, advanced standards, most of the marriages on this show are awful. 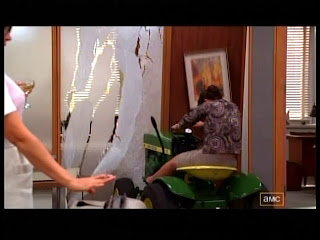 But when you surrender the modern standards and view them by the standards of the day, there are times when you can see how, bad as some of these marriages are, there’s a certain functionality to them. In such a world of tight conformity and high pressure, they do manage to create a space where two people can let the mask slip just a little bit when they need to.

Don and Betty may have more than their share of problems and obstacles, and sure, they’re both hopelessly miserable most of the time, but that doesn’t mean they can’t enjoy a passing moment where they’re both at ease with each other over a wine and a beer and a little chicken salad; where they’re both easy, relaxed, and not putting up any walls. It’s what happens when two people whose day to day lives are practically defined by hopelessness allow themselves the feeling of anticipation. What if we lived in London? What kind of people would we be then? It was a nice little scene.

Greg and Joan on the other hand are dealing with a major setback in their lifeplans. Christina Hendricks is on fire in this scene and not just because of her hypnotic boobs in a nightgown. She confronts him openly and with little drama, bats away his attempts to lie, pushes to get as much information as she can out of him (and course corrects every time she pushes too far), offers 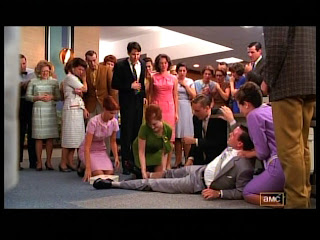 possible solutions and a general optimistic resolve (if only for a moment), and then ties it up with some mothering by offering to undress him and tuck him in. You can see Joan is devastated, but only after she goes to “close the light” and allows herself a moment of fear in the darkness, her face toward the wall. She wouldn’t ever show that fear to anyone else, not even her husband. She is as capable a wife as she is an office manager. Unfortunately, she’s no longer an office manager and what she’s going to do about that is driving us crazy with anticipation.

The Brits arrive and they’re all condescending and horrible. The appropriately named Guy MacKendrick bulldozes his way into Sterling Cooper with a smile, a handshake, and nothing but empty words. Don and Lane are deeply disappointed to hear that PPL doesn’t value them nearly as much as they thought or hoped. Don’s job remains exactly the same and Lane gets shuffled off to an India assignment. It surprised us, but we were initially quite disappointed with the prospect of no more Lane on the show. We didn’t realize how much we liked the character.

Don, because he’s Don, turns a moment of adversity into a triumph, when in the midst of downing his bitter champagne, he gets invited to meet Conrad Hilton, sweeps out of the office, and winds up with the best opportunity he’s had in a long time. It’s interesting to note – and we don’t think this escaped Don’s notice – was that he got Hilton’s attention not by being Don Draper, but by being Dick Whitman. He tends to let strangers in more and he had no expectation of ever seeing Connie again, so he told him a story about pissing in the trunks of rich people’s cars. Just his luck, it happened to be the right story to tell and the right person to tell it to. 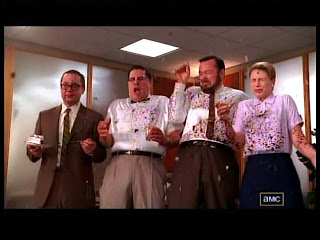 And then of course, there’s The Incident. Sure to go down as one of, if not THE all time shocking moments on Mad Men. One thing about this show, when they turn it on, it goes up to eleven. It’s all quiet scenes of lighting cigarettes and long pauses and then without any warning, someone’s foot gets cut off right in front of you. Is it bad that we first greeted it with laughter? Especially when Lois drove right through the glass panels of Pete’s office? Sure, we could say it was nervous laughter brought on by shock, but really, it’s because the whole thing suddenly veered into a twisted sitcom. Whacky antics, except with blood splattering everyone. Once again, it’s Joan Holloway (she’ll always be Holloway, dammit) to the rescue, swiftly assessing the situation and immediately responding with appropriate action. There was also a nice split-second moment between Pete and Peggy. She fainted at the site of blood and he quickly caught her.

So for all the anticipation of this episode, it all turned out to be over nothing. See Sally? It really is just a baby. See, Don? You can be a pretty good Dad when you need to be. See, Sterling Cooper? You’re right back to where you were yesterday. Now squeegee that blood off the windows and get back to your jobs. The two people who benefited most from the events were Roger (who got some killer lines off) and Lane, both of whom realized that they have some work to do if they want to stay where they are.

And then, in one of our favorite scenes ever, we get Joan and Don, having a perfect moment. It’s not so much that these two have an attraction to each other (although on some level they simply have to because they wouldn’t be them if they didn’t feel that attraction); it was more about two supremely smart, controlled, and ridiculously attractive people knowing each other well enough to see how similar they really are. 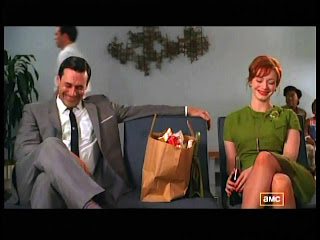 Have you ever seen Don laugh like that? Even more notably, he laughed like that with a woman. Normally when dealing with women, he’s always way too caught up in playing Don than being genuine. They were respectful of each other, but just affectionate enough because they’ve known each other a long time and they’re saying goodbye. And she called him Don and kissed him on the cheek. It was sweet. We honestly don’t see even the hint of any romantic feelings between them, but for a split second we got the impression that if these two people had made different choices and wound up together, they probably could have ruled the world.