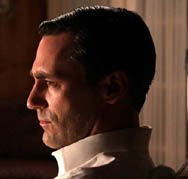 “Should you be lucky enough to strike gold, remember your children weren’t there when you were swinging the pick.”

The theme of last night’s episode, parents and children and disappointment, wasn’t exactly hard to figure out. If anything, it was a little heavy-handed as almost every scene dripped with it, right down to the closing shot of Don standing between his dead father-in-law’s bed and his soon-to-be-born child’s crib. It was all about generational discontent.

In fact, the generational theme was so prevalent that Sal’s scenes stuck out quite a bit due to their lack of theme. Of course, the fact that we have a bit of an issue with Sal’s scenes could have something to do with it as well. Sal apparently has not been fulfilling his husbandly duties ever since his handjob interruptus with the bellhop in the first episode. Poor Kitty (and we literally say “Poor Kitty” out loud every time she has a scene) puts on a peignoir from the Trudy Campbell collection and awkwardly tries to get her husband’s motor running to no avail. He uses the “I’m nervous about work” excuse and to be fair, that was at least partially true. Sal has unexpectedly made the leap from advertising artist t 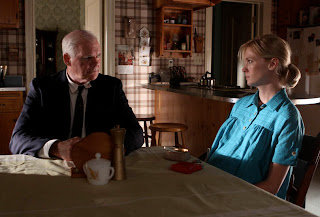 o commercial director due to the largesse of Don, who, much like he did with Peggy, rewards people with whom he shares a secret. He leaps out of bed and acts out the Bye-Bye Birdie-themed Patio commercial he’s due to shoot the next day and queens out on a level we’ve never seen from him before. Hence, our problem with this scene.

One thing we always found commendable about how Sal’s character was written and portrayed is that the writers and Bryan Batt walked a fine line between the past and the present and for the most part, pulled it off. What we mean by that is that Sal is clearly a gay man to modern audiences because we live in a time when the stereotypical signifiers for male homosexuality are well known to most people but would have been largely unknown to people in that time period. In 1963, to most of his co-workers, Sal just comes across as a suave, well-dressed, witty man with a heightened interest in celebrity and entertainment. WE all know he’s gay, but THEY can’t figure it out. It’s of a piece with all of the other “look at how times have changed” tropes they play on (like smoking and driving without a seatbelt and casual misogyny).

Our problem with the bedroom scene is that suddenly Sal is over-the-top queeny in a way he never was before and believe us, we speak from experience that when you’re having a discussion with your beard about why you’re not interested in sex lately, the very LAST thing any closeted gay man would do at that moment is let the veil slip. It just didn’t ring true to us at all and it came across like something that was written by someone who has no understanding of what it’s like to be in the closet. Strange, because they’ve been so good at that particular theme every other time it came up. It seems to us that they wanted to get Kitty to a certain story point – the revelation that her husband is a homosexual – and the only way to do 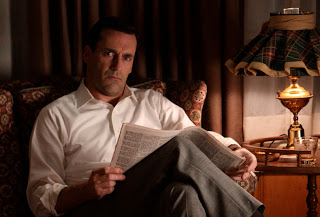 that with a character like Kitty, a young, unsophisticated and unworldly girl in 1963, was to go completely over the top with it. It was literally the only way she was going to figure it out.

Later, Sal’s commercial is unveiled to the clients and it’s exactly as it was described several times: a shot by shot recreation of the Bye-Bye Birdie opener. So much so, that we were taken out of the scene wondering how any company would have gotten away with such an overt ripoff. Maybe the laws were a little more lenient back then. The clients hate it and even the Sterling Cooper crowd is forced to admit that some unnameable thing is missing. At first, we bristled once again because we thought the point was being made that a gay man wouldn’t have been able to pull off directing the sexiness of an Ann Margret but that doesn’t appear to be what they were going for in that scene. Matt Weiner said in his Inside Mad Men video for this episode (and are you watching them? You should be) th 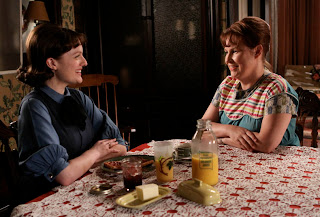 at’s part of a larger theme in the show, that a thing either is or isn’t. He offered Don and Betty’s marriage as an example, it’s got all the external trappings of a perfect marriage, but it isn’t what it’s supposed to be. Okay, but that was a little obtuse and our quick reading of other Mad Men posts and comments around the internet today reveals that a lot of people came away from that with the reading we originally had: that it was flawed because a gay man shot it. Still, that shot of Peggy triumphantly smiling at Don as she left the conference room (and his somewhat annoyed reaction to it) was a nice payback to her earlier insistence that the ad was a bad idea. She was right and she had no problem gloating over that to her boss.

We’ll be honest: for us, the Sal scenes over rode any other scenes in the show (for obvious reasons) and we found the generational theme a little too heavy handed, and for that reason alone, less interesting. Everyone in those scenes, from Peggy’s mother, to Gene, to Pete’s classmate’s father, stated outloud what the theme was. There was no subtext to it and because of that, it felt a little less like Mad Men to us. That doesn’t mean there wasn’t good stuff in there, though.

If it wasn’t clear before, Betty is shaping up to be a really horrible person. She not only refused to talk to her father about his impending death, she criticized him for wanting to talk about it at all. “I’m your 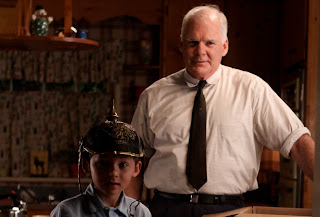 little girl,” she pleaded with him, “Keep it to yourself.” Awful. We’re really starting to hate her this season. Even worse was when she wouldn’t even turn around to look at her own daughter who was beside herself with grief and angrily told her to go watch television. To further the symbolism (again, in a less than subtle manner) she tears into the peach that Gene bought specifically for Sally, the juice flying everywhere. She’s selfish and childish and she’s a terrible mother to her children. Strangely, Don, who’s always been so disconnected from his own feelings and the feelings of other people, seems to be realizing this.

Gene seems to have realized it as well. “You can really do something,” he says to Sally, “Don’t let your mother tell you otherwise.” All we could think as we watched Betty literally close the door to her daughter”s grief and yell her out of the room because she was being “hysterical,” was “Man, that’s gonna come up when she’s in therapy in 30 years.” Kudos to Kiernan Shipka, who plays Sally, by the way. That little girl can act.

Let’s see, what else…jai alai? It was a cute diversion. One of those “If they only knew” things the show does so well. We’re old enough to remember when jai alai was still being pushed as the next big thing in sports. Obviously, that never happened. Peggy’s search for a room mate was another cute diversion, 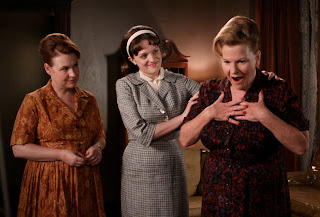 from her co-workers cruelly (but hilariously) pranking her to Peggy’s awkward attempts to pass herself off as a fun-loving single gal, it’s all part of Peggy’s journey this season. She got the career and it seems to be going fine. Now she’s got to work on having an actual personality and a life to go with it.

No one understands this better than Joan. The biggest tragedy of this show is that there simply isn’t enough Joan. She had one scene in this episode and Christina Hendricks, as she always does, made it sing. In 3 minutes of dialogue she reveals once again that she’s way smarter than people think (“This reads like the stage directions to an Ibsen play.”) and could be an incredible asset to the office if she and the people around her could only see her talents. She banged out a room mate ad off the top of her head that was full of life and rife with so much imagery (“loves to laugh and lives to love”) that all we could think was how much better a copy writer she could be than even Peggy if given half the chance.