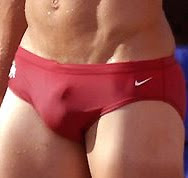 Fellow gays, ladies, and anyone else who enjoys a peek at the package to get them through the day, stand up and be heard, for the shot heard ’round the world has been fired and Puritanism once again wins the day! 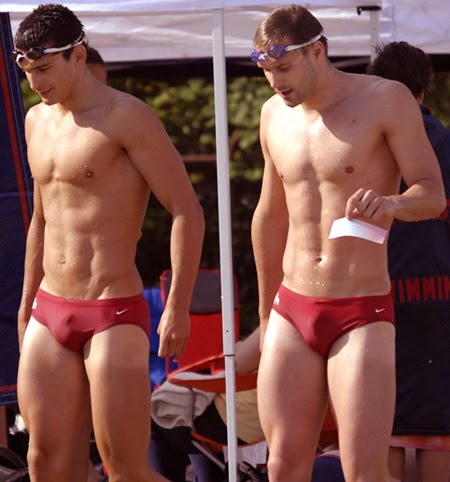 “Alton Towers today announced a ban on tiny trunks at its aquatic park, on pain of compulsory bikini waxing.

Rachael Lockitt, the park’s PR manager, rejected any suggestion that the Speedo story was dreamt up to generate a little August publicity. However, the venue got good press mileage in May when it announced a similar “ban” on children wearing high heels to cheat the height requirements on its rides.

It insists the trunks-only rule is an “extreme measure … to prevent embarrassment among fellow members of the public and to maintain the family-friendly atmosphere at the resort”.

“While women may hail the return of the skimpy bathers, the style itself is not deemed public or family friendly, and therefore we are requesting that male swimmers wear more appropriate styles such as boardshorts.”

This is an OUTRAGE! What’s next? Beach burkas? Funny, but we’re not hearing anything about banning the bikini to save families from “embarrassment.” We fear that this form of discrimination will find its way over the Atlantic to this, our be-speedo’d shores.

Oh, who are we kidding? To our eternal regret, the grape-smuggler largely disappeared from our hallowed shores decades ago, save for the occasional competitive swimmer and a few gay vacation spots (and even the gays have largely abandoned this most tantalizing of swimwear and tanning options).

If we can get all analytical on your asses, we’ve always felt that men’s summer clothing got modest almost two decades ago because of two factors: the normalization of gay male desire and the revelation that women enjoy sex and enjoy looking at men. The poor dears just couldn’t handle the attention and covered up their dainty flowers in response. Poo to that.

We can already hear the responses (especially from the ladies): “I don’t want to look at some fat guy’s junk hanging out!” Well neither do we! You know what else we don’t want to see? A fat girl in a string bikini, but just try and make that argument in support of banning them altogether. The outrage would be Biblical.

Ladies (and gents), we’re here to tell you that the male body is a GORGEOUS thing and we decry the movement to cover it up or call it shameful. No, we don’t want to see grandpa in a banana hammock either, but we sure wouldn’t mind if some of the fitter guys out there would show off the goods more.