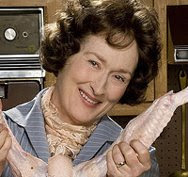 And we have opinions, of course!

Let’s get this out of the way first: it was the most enjoyable two hours we’ve spent inside a theater in quite some time. Is it great film making? Well, no. We’re talking about Nora Ephron here and she has never made the kind of films that impress us (or that we’re even likely to see). But since we have a fondness for 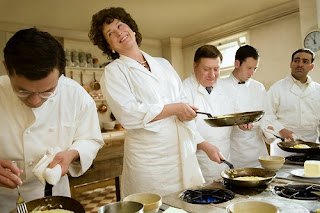 Julia Child that stretches back decades and a fondness for Meryl Streep that stretches back almost as far, that we would see this film and love it was a no-brainer. Meryl NAILS Julia (which sounds a little dirty). It’s not just the voice and the strange accent; she gets the body movements and even the breathing down. It’s really eerie. She doesn’t truly resemble Julia Child physically – even in a frumpy wig and dowdy clothes, she’s far more attractive than Julia ever was – but she embodies her so totally that you forget any differences. It’s such a cliche that it’s almost not worth saying, but Meryl Streep really is an incredible actress and we’re in agreement with most of the critics when we say she’s the main reason to see the film. Not just because she’s Meryl Streep. but because she’s Meryl Streep playing Julia Child, a charming and charismatic woman who led a fascinating life and did amazing things with it.

There’s something that a lot of the critics are saying upon which we are decidedly NOT in agreement, however. It seems almost every review of the movie concludes that it would have been a better movie without the “Julie” part of the story. We can understand why they would say that. After all, as we said, Meryl Streep + Julia Child makes for a very entertaining and engrossing story. But we walked out of that theater speechless for a few moments and when we finally regained our ability to speak we both said the same thing: that was us up there on the screen. No, really. Tom made the point that out of everyone in that crowded theater, the two of us were having a totally unique reaction to the Julie portions of the story.

Here’s the back story in case you didn’t know. In late 2002, Julie Powell decided to escape the drudgery of her professional life as a cubicle dweller and start a blog, The Julie/Julia Project, the hook of which was that she would cook all 524 recipes found in Julia Child’s magnum opus, Mastering the Art of French Cooking. The blog was witty and funny, biting and acerbic, and above everything else (and somewhat ironic considering its subject matter) it was raw. Julie Powell was in many ways the quintessential blogger: she had some writing talent but her real talent was in her ability to convey her voice accurately and with gusto. After reading only a couple entries you felt you knew her well.

We discovered her blog some time around 2004, after she had concluded her insane project, and we read the entire thing from beginning to end in only a couple days. We we 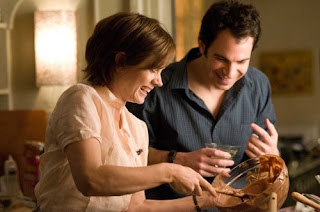 re enthralled and we’re not embarrassed to admit that she was one of our biggest influences. In short, she made us want to blog.

The blog led to a book, which led to this movie, which led to the inevitable jealous backlash against Julie from bloggers and foodies alike. It’s become quite the thing to point out her flaws, both personal and professional, but we’re having none of it. The fact remains that she had a brilliant idea for a blog and she did the hard work to see the thing through and it’s not really for us to say whether she “deserves” a book deal or a movie out of it.

But kittens, sitting in that theater and watching the story of Julie and her husband play out was easily one of the eeriest things we’ve ever experienced in a theater. Here was a couple (a redhead and a brunette, even!) having the kinds of discussions and arguments and triumphs that not only have we had in our lives, but ONLY we have had (or at least, it felt that way at the time). We know no one who experienced the kinds of things that happen when you start a blog and find, to your complete amazement, that people – LOTS of people – are reading it. The first comment from a reader, the arguments about how it’s eating up all your time and money, the discussion of whether to include a PayPal button, the first call from a reporter, from an editor, from a literary agent, the puzzled queries from friends and family members who don’t understand why you’re doing this strange thing — all of that happened to us and all of that was played out onscreen in front of us as if it had been ripped out of our heads (and inexplicably turned heterosexual).

Here’s something we’ve never admitted before: like Julie Powell, we started this blog because we were in the midst of Hard Times and Dark Days and it was a way to keep that at bay and just do something for the sheer enjoyment of it and because, contrary to our expectations, people actually came to read us. The movie doesn’t go far enough to point this out, but when you have a blog that suddenly becomes 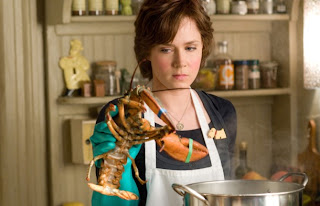 “talked about,” and when you feel like you’re drowning out in the real world, that blog becomes your lifeline and the people who read and support you become, in many ways, more important to you than even your friends and family. Because those wonderful strangers are demonstrating something that even your closest compatriots sometimes fail to: they believe in you.

It’s a small thing and one that can easily be overstated and over-dramatized, but it’s still a unique and powerful experience – especially because its one solely of your own creation. There’s no publication or editor or marketing department. It’s just you, and your thoughts, and (hopefully) your talent, putting it out there in the ether to the faceless strangers who have, to your eternal gratitude, decided that you have something to say worth listening to.

So we can understand why so many critics found the Julie portions less than interesting. It’s because there really are only a handful of people (relatively speaking) out there who understand what it’s like to start a blog and see that blog become something much bigger than they ever expected. We walked into that theater eager to see Meryl Streep become Julia Child before our very eyes – and we got that – but we never expected to see the very first film about blogging. And we certainly never expected to see so many aspects of our own lives play out onscreen right in front of us.