Well. That was a weird one.

We always watch each episode twice before writing a review. Quite often, upon the first viewing we come away thinking “What a weird episode. Nothing happened.” Upon the second viewing, we tend to pick up on the nuances and we almost always conclude that the episode was as good or better than any of the rest of them. Unfortunately, we’ve sat through this 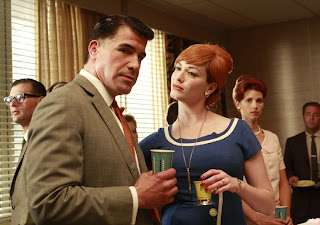 episode twice now and we have to say, while there were some great scenes and certain story arcs seemed to have progressed some, the episode as a whole was incredibly disjointed. It was all over the place, frankly. In retrospect, it seems like this was the episode where they needed to advance certain plots and get certain characters from Point A to Point B but without all the cleverness or thematic unity in which the show usually indulges.

That’s not to say it was a bad episode; just that it wasn’t among our favorites. Besides, even if it was bad, a bad episode of Mad Men is better than 90% of what’s on television anyway, so we’ll gladly take it. The title of the episode was “The Inheritance,” and while you could argue that it referred to Pete’s lack of one, in a more general sense it referred to how a person is shaped by their family and how it’s practically impossible to escape the influence one’s family has on a person.

Betty gets news that her father has had a stroke and the first thing she does is call Don in his hotel room. Don, not being completely an asshole, immediately offe 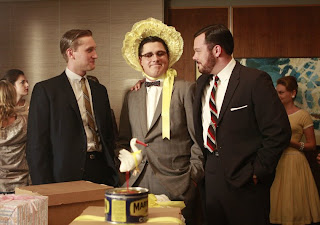 rs to drive her down to Philadelphia. She demurs and they decide to leave the next morning. One look at the Main Line home in which Betty grew up tells you an awful lot about her. Money. Big time old WASP money and the emotional repression that goes with it. Betty is appalled that her childhood home is being run by his father’s brassy new wife and that everything isn’t exactly like she left it. We get to meet her brother, who is, unsurprisingly, about as warm and mature as Betty is and who is also practically her spitting image. Great bit of casting. Betty’s father looks shockingly like John McCain and we had the hardest time focusing on his scenes because we kept expecting him to open his arms wide and address everyone in the drawing room as “My friends.” Still, his scenes were a little disturbing. Normal one minute and succumbing to dementia the next. The scene where he gropes Betty confusing her for his dead wife was sad and disturbing but we couldn’t help cheering the crazy old guy on when he tore into Don for being such a closed book.

Meanwhile, Betty’s concerned that she might not get every little material thing to which she thinks she’s entitled. When she finds out that her sister-in-law absconded with some hideous ceramic piece that belonged to her mother she cries out “Do I have to go around putting my 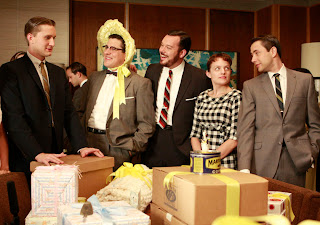 name on everything I want?” Hey Betty, your father’s crazy and your husband’s an asshole. Focus. Betty being the immature little princess she is, she instead sleeps with Don on the floor of her childhood bedroom and then throws him back out when they return home. “We were just pretending,” she says to Don, and that pretty much sums up her whole marriage.

Pete Campbell comes from an equally wealthy (if not more so) and equally emotionally repressed family. We see Pete and Trudy (in an utterly ridiculous peignoir) once again discussing their fertility issues with Trudy bringing up the possibility of adoption. Pete reacts angrily to her but seems to consider the idea when she says “We’re not related but you love me.” If the scene with Pete’s brother where they both joke about killing their mother to get their inheritance doesn’t drive home his cold feelings toward his family, then the later scene with his mother does a fine job of that. Pete hates his birth mother in the same manner that Betty hates her stepmother. The crucial difference is Pete as much as comes right out and says it to her face. We kind of admired him for that and we can see why he was so reluctant to talk to Trudy about having children. He wasn’t interested because his own family is so fucked up but now he seems to be coming around to the idea that adopting might be a good way to break the curse of the Campbell family bloodline, inheritance or no. 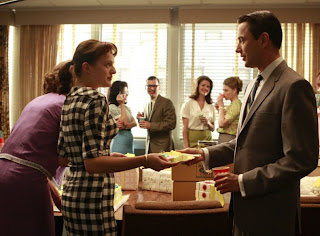 And you all thought we were crazy when we floated the idea of an impending Pete/Peggy romance but it’s hard after this episode to deny that they do have some sort of bond as well as a small amount of chemistry. His soft “Thank you” to her when she handed him a piece of cake at Harry Crane’s baby shower was loaded with more feeling than Pete ever showed his wife and once again, he turned to Peggy to unload his own fears and frustrations regarding his upcoming flight to California and his hatred for his own family. She’s the only person he talks to that way.

Back at the Draper family homestead, Betty gets a surprise visit from creepy neighborhood boy Glenn Bishop, who ran away from home and is hiding out in Sally Draper’s playhouse. Which, when you think about it, is a bizarre callback to Betty’s brother’s observation that Don could afford to build a house in the backyard to keep their demented father in. Glenn, like seemingly everyone in the Mad Men universe, is unhappy at home and reveals to Betty that he came to “rescue” her. Their scene on the couch together watching cartoons and sipping Cokes while holding hands was even more disturbing than the scene where Betty’s own father groped her. But to Betty’s credit, she called Glenn’s mother Helen to come and pick him up. The last time 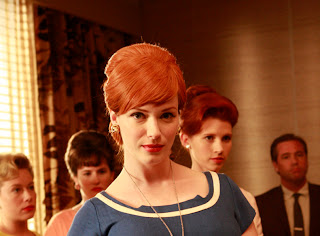 she saw Helen she slapped her across the face, but after taking Glenn home, Helen returns and they have a little heart to heart at the kitchen counter, puffing away on their cigarettes.

We’ve been dying for Helen to make a return this season because as the only divorced woman in Betty’s sphere, we really wanted to see if Betty would be brave enough to admit her own marital problems to her. To our surprise, she did and what started off as a confrontation ended up as a commiseration. This, along with Betty’s recognition that she needed to break Glenn’s heart for his own good, could possibly mean that maybe Betty’s growing the hell up finally. We’ll see. These characters have a tendency to disappoint us, just like real people.

In Sterling Cooper news, Paul Kinsey is a poseur jackass. While it’s certainly admirable that he’s a white man getting involved in the civil rights movement in 1962, the show makes it pretty clear that he’s doing it to paint a certain pleasing picture of himself. We still have problems with the black girlfriend thing. It just doesn’t feel realistic to us that he would parade her around his all-white office and only get a few sideways glances. Even if we can buy that he’s naive and immature about the whole thing, his girlfriend Sheila strikes us as neither and she seems perfectly blase about it when we would have to think a black woman in 1962 would be WELL aware of the price to be paid for flaunting that kind of relationship.

Joan wasn’t in it en 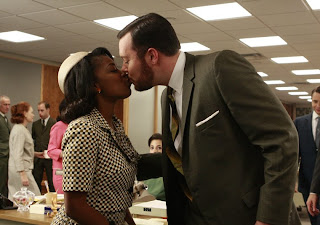 ough, but she owns every damn scene she’s in. When she’s with Don, she’s like this uber-secretary, capable of just about anything. We only got the barest hints of her feelings regarding the Roger/Jane romance. She could barely look at him when he walked into Don’s office and took out her frustrations on poor Paul by humiliating in front of all his peers. To be honest, he deserved it.

In the end, Don decides to run away to California and as the plane descends (its occupants puffing away on cigarettes), the California sun rises on Don’s face and we’re left wondering if he’ll ever come home again.