A quartet of spooky ladies hit the red carpet in full-on Spooky Lady style for the premiere of Wednesday. We tend to be a little unhappy about stars doing theme or character-based dressing for the red carpet, but sometimes a girl’s just gotta go with what works for her. 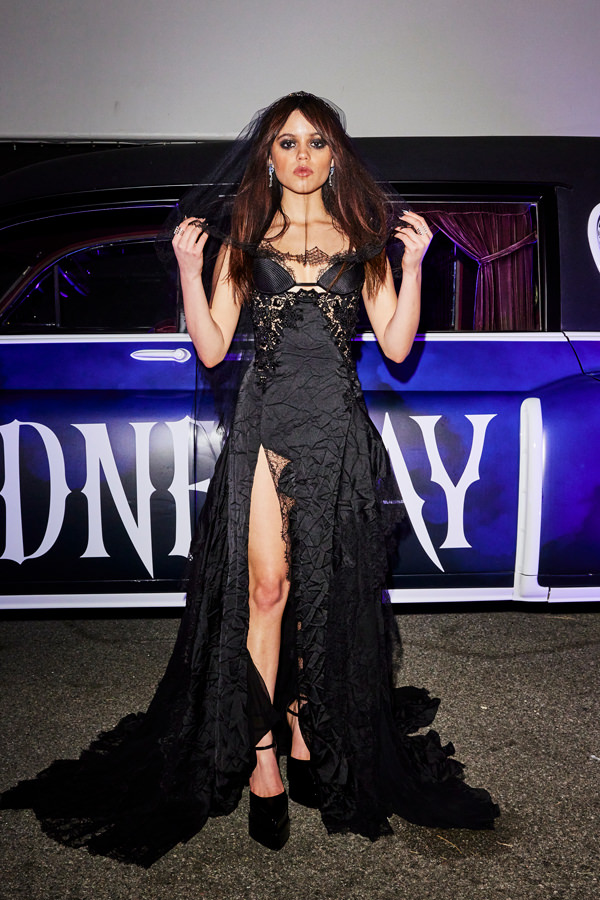 No one would look at this outfit without context and conclude she’s wearing a Wednesday Addams costume, that’s for sure. It’s still pretty costumey, but since we rarely get to see real Goth Glam on the red carpet, we’re inclined to like it. The dress is meh and the shoes are horrid, but the veil and makeup make the look. If she’d worn this during the promo tour for The Sandman, we’d have called it costume, since it looks pretty much exactly like something her character Lucifer would’ve worn on the show. Here, it’s just a killer dress on the best possible wearer for it. Her hair looks great. She should keep it long for a while. An old pro like CZJ is not only not going to show up in costume, she’s going to do what actresses have been doing for as long as there have been film premieres: show up reminding you that she is an ACTRESS and not the part she plays. Looking like a sexy angel for your Morticia premiere is a deliberate and clear choice. She looks fabulous. We hate it but it’s cute. Does that make sense? Whatever. The style of dress is the usual Rodarte frippery, but we can’t deny that the spider is a cute touch. Love the jewelry and makeup, not so much on the hair.  And now, cute pics of spooky ladies that will make you feel kindly toward them and cast a side eye at us for being such critical bitches: As much as we like the cast and the overall energy, we’re so sick of “magic academy” stories. To be fair, we’re not the demo for them, but it’s jarring to see the Addams family used this way. Previous post:
Amy Adams in Dolce & Gabbana at the LA Premiere of DISENCHANTED: IN or OUT? Next Post:
THE MENU Star Anya Taylor-Joy in Schiaparelli on THE TONIGHT SHOW STARRING JIMMY FALLON