On shooting The Lost Daughter in Greece during Covid “We did hard-core quarantine. But we  were in Greece, which was not hard-core at all. Everyone in the film was in a bubble, on an island, and luckily, we all loved each other. We had all sorts of parties: dance parties, hide-and-go-seek parties, lots of games.”

How she felt about filming almost nude: “It is difficult. Some days, I don’t want to take off my clothes on set. Just because I look a certain way doesn’t mean I don’t have feelings. And my character, Nina, is almost bored by her appearance. She has reached a point in her life where her hotness doesn’t match who she is anymore.”

On the age she knew she wanted to act: “Zero old. Nothing old. I couldn’t wait. I grew up on sets. My parents were always working with these amazing artists, and I just loved it. I wanted to be a part of it.” On meeting Joni Mitchell: “I’ve seen her twice. I was like, Haha, hi, umm. I can’t really speak.”… “I love Joni Mitchell. When I was younger, I thought, If I ever get a tattoo, I’m going to shave my head and have BOTH SIDES NOW tattooed on my head. And then when my hair grew back, no one would know it was there. But I never did it”

On pretending to be drunk for her character in The Power of the Dog: “There are a lot of different phases in her drinking. At first, it’s courage, and then it gets very bad. People who are drunk try not to talk drunk. For scenes where I had to be really stumbly, I’d spin a bunch in circles and close my eyes so I would be off-balance. That makes you feel out of control, which is perfect for playing drunk” Favorite film growing up: “Initially, I was forced to watch Gigi, and so it slowly became my favorite film. But then it was Point Break. Doesn’t that sort of encapsulate me?”

Recalling the first time meeting Brad Pitt: “I was definitely starstruck when I first met Brad Pitt, on the set of The Good Girl. I was working with Jennifer Aniston, who was his wife at the time, and there were a lot of racy scenes. I remember putting my hand out to shake his, and accidentally hitting the door. He said, so confidently and kindly, “Well, you have another one. It’s all right.” It was a really lovely exchange, but I was definitely starstruck.” On playing Clare in Passing: “I loved her, but she irritated me. You know what? For the first time, a character sort of embarrassed me.”

Recalling her first time wearing heels: “I was very young, dancing around the living room in various fabulous outfits that I cobbled together” 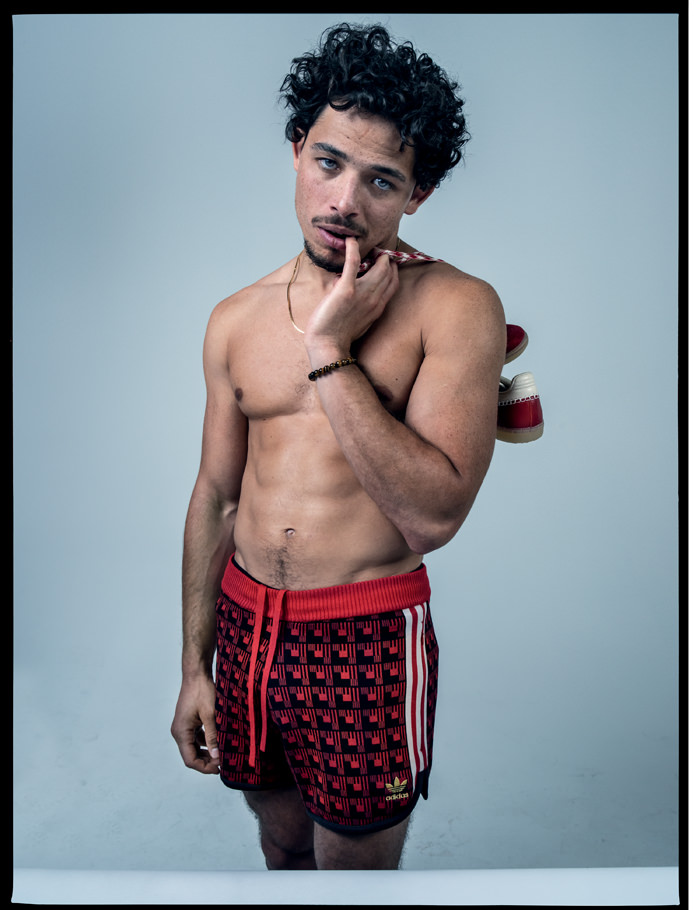 On the first CD he bought: “Eminem. The Marshall Mathers LP. I burned that joint through the ground. My mom heard me cursing, and she was like, “What are you listening to?!” I was like, “Yo, this is my shit!” Two years ago, I saw Eminem live at the Oscars, and I was just like a kid. I was sitting there bumping.”

Recalling the first time he auctioned for In The Heights: “I had auditioned for the role of Usnavi in In the Heights a couple of years back, and I bombed that audition. I was like, “Yo, I’m never going to get this role. That’s it. That was my chance.” A couple of years later, the movie comes back around, and I was able to get a meeting with Jon Chu, the director. No singing—just vibing. I felt his heart, and he felt mine. After I left the meeting, I got another job offer. I texted Jon: “If I’m not in the running, I’m going to take this other job. Con Edison don’t wait for nobody!” He wrote me back: “It’s you. It’s always been you.” On stuffing her bra for a scene in Licorice Pizza: “My favorite part about that bikini was that I finally had big boobs. I had to stuff the bra with so much toilet paper. I felt like I was back in middle school, and I looked at myself and thought, It finally happened.”

Her celebrity crush: “Albert Brooks. I’m looking for my Albert Brooks, and it’s so hard to find that person. I own only two movies, and they are both Albert Brooks movies.”

On where she had her first kiss: “In New York, on the Fourth of July, in my friend’s basement. It was terrible. I had braces. I did get fireworks, though! I felt them in my body.” On becoming Venus for her role in King Richard: “Before I got the part of Venus Williams in King Richard, I didn’t know how to play tennis at all. I was so bad. I’m left-handed, but I had to play right-handed. The serve was probably the hardest thing I had to learn. Eventually, it becomes part of your muscle memory. And I became Venus!”

Recalling her interest in acting at a younger age: “I would act out scenes from Grey’s Anatomy. I used to pretend I was in the surgery room. The Wiz was always on, and I know that movie from beginning to end. I definitely was dramatic. I still am!” On his cinematic crush: “I was super in love with Violet in The Incredibles. And I very much liked Emma Watson in Harry Potter.”

Recalling the first time he was starstruck: “I met Leonardo DiCaprio, and I said hi. Very smooth, without emotion. I was super happy!”