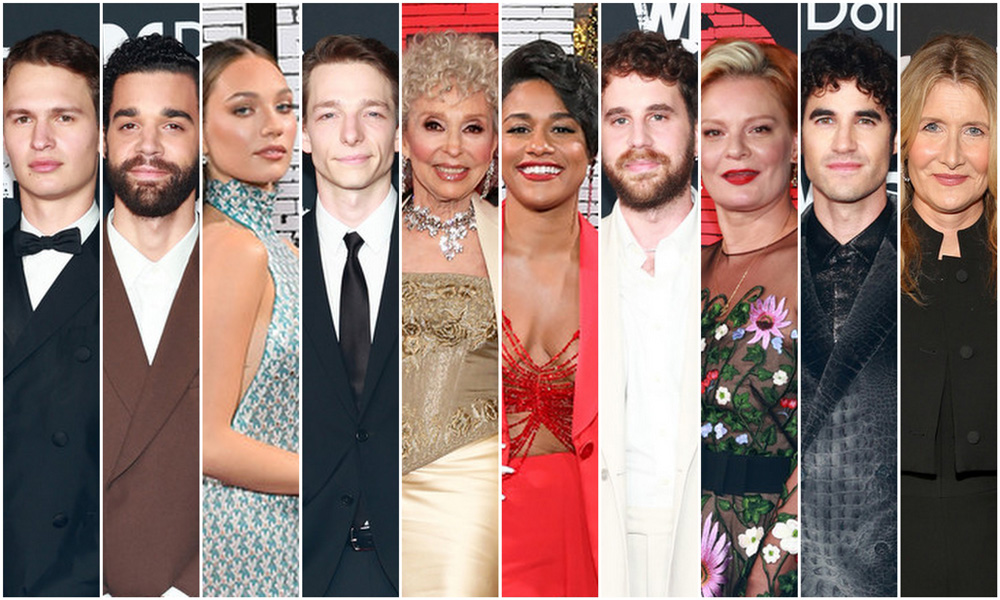 The stars of West Side Story and some of their celebrity supporters came out for the LA premiere of the film. We covered Rachel Zegler’s Cinderella serve here and we wind up making a lot of references to what they all wore for the New York premiere, so this post comes with a required reading list. Get to work! As we noted after the New York premiere, he appears to be trying to stay on his best behavior, so to speak; hewing to an old-fashioned formal style that underlines an attempt to be perceived as a gentleman worthy of courting Cinderella herself and not like a celebrity trying to weather a sexual assault accusation. We wonder if she isn’t deliberately trying to avoid ingenue styles, knowing that her co-star Rachel Zegler would be slinging them left and right. Between this and the lace number she wore in New York, she seems to be doing her best to stay a little flashier and sexier than her starlet co-star. The suit’s great. The top’s a bit much. Or not enough, in this case. These groovy retro styles age him 25 years and we have no idea why he’s so committed to them. This guy is years away from being 30, for Pete’s sake. You had us until the slingbacks, Laura. Pure flex. You’d think she was the star of this film rather than a member of the chorus, essentially. She looks fabulous and that’s a great color to see on the red carpet. The dress is pretty, but we wish the skirt lining matched the skirt length and we think the cuffs look unresolved. This guy dresses like one of JFK’s secret service agents. No, that’s not a compliment.