Home » Movies » Our Favorite Movie Costumes of 2021: Part One

Our Favorite Movie Costumes of 2021: Part One 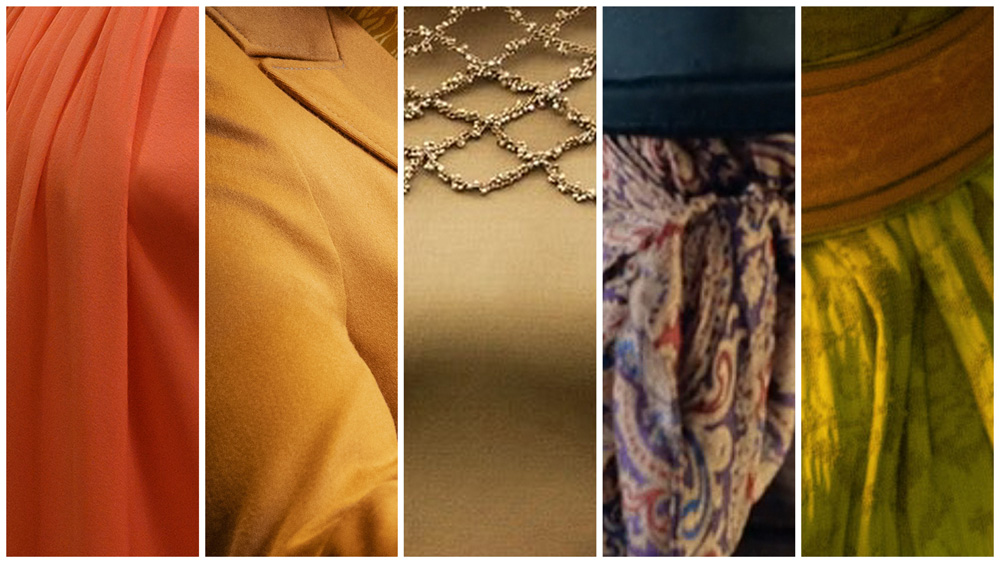 Let’s do a different sort of Best Dressed year-end list, shall we? Because the only thing we love talking about more than red carpets and drag queens is costume design. They’re all sort of interconnected, when you think about it. Drag, red carpets and cinematic costumes all have to sell an image or a character through the use of clothing and accessories, but they each have very different goals and methods of getting to that final image. For film and television costume designers, they have to work with the script, the director, the art director and the actors themselves in order to produce costumes that support themes, underline character traits and tell stories in their own rights. Despite our opening sentence, this isn’t an award for who necessarily did the best film costume design work this year. We’re not in a position to make such assertive declarations. What we can do is tell you which costumes were the most memorable or interesting to us, not to mention which ones we think served as perfect examples of what cinematic costume design can do. It took us a while, but we narrowed our choices down to fifteen. We’ve tried to keep the list varied in its styles and references instead of just picking the fifteen most fabulous dresses onscreen this year. Having said that, while these entries aren’t appearing in any sort of order, we did sort of stack this first post with some real jaw-dropper lewks. When House Atriedes touched down onto Arrakis and into a potentially disastrous political situation in Dune, Lady Jessica, concubine of the duke, mother of the heir, and high-level Bene Gesserit in her own right, chose to disembark in this absolutely jaw-dropping gown and headpiece, with a veil and train so long and impractical, the wind could have knocked her over if she didn’t have attendants. So much is being told here. The golden color and embellishments speak of her wealth, the mesh speaks of a sense of entrapment and enclosure (while harkening to her Bene Gesserit background as the Reverend Mother is similarly depicted in mesh), and the veil speaks not only of secrets, but of a kind of cultural appropriation. She is greeted by the Fremen upon arrival, who are fairly literal representations of nomadic Middle Eastern groups, with the kind of veils and head wraps (which are appropriate desert-wear, after all) she’s wearing, albeit in much less fine renderings. Concubine, colonizer, and sorceress. It’s all there in this costume, which also happens to be one of the most gorgeous and memorable of the year.

Trudy Smith (Regina King) in The Harder They Fall As the outlaw Trudy Smith, one of the few entirely fictional characters in Jeyme’s Samuel’s stylish revisionist western The Harder They Fall, Regina King swaggered her way through the film in a succession of anachronistic costumes with a heavy steampunk influence, looking fierce in every one, as is her way. But this introductory look is our favorite; so strongly declarative that it can bring a train to a halt just by standing in front of it. While there’s no denying that the combination of a Butch Cassidy-style bowler with a head scarf evoking Harriet Tubman is an explosively meaning-laden combination that should tell you everything you need to know about her, it’s the combination of hardness and softness (the lace blouse, the delicate braids and gold earrings, the double-breasted cropped leather jacket) that makes this costume so captivating to us. That and the fact that she just looks cool as hell. As Ying Li, the guardian of the mythical secret land of Ta Lo in Shang-Chi and the Legend of the Ten Rings, Fala Chen didn’t receive all that much screen time, even though the entire story more or less revolves around her. In this introductory scene, where she meets and fights the man who would win her heart and become the father to her children, the brilliant golds and greens manage to tie her directly to the magical forest that bends to her will while also being bright and vivid enough to stand out against it and make every one of her balletic tai chi moves register onscreen. She ditched the hat and mask early in the scene(using them as weapons, more or less), but you simply can’t beat them for being a strong visual representation of her own otherworldly yet nature-based power. This costume did everything it needed to set an entire story in motion, defining her, her relationship to her husband, and the mythical land based in Chinese culture from which she hails. When a director takes the time to do a slow tilt up from a character’s shoes to their face, you can rest assured it’s because they love the costume designed for them and consider the time taken to show it off to be as important as any introductory dialogue or actions. In The Matrix Resurrections, when Yahya Abdul Mateen II stepped out of a bathroom stall intoning Laurence Fishburne’s lines from the original Matrix, the combination of his perfect mimicry of Fishburne’s Morpheus with a completely un-Morpheus-like setting and costume instantly underlined that we were meeting someone who both is and isn’t the Morpheus we remember. A camp take on a decidedly un-campy character, reinforcing the film’s commitment to indulge in nostalgia and fuck with its own over-discussed iconography at the same time. Because this (it has to be said: utterly fucking GORGEOUS) belted marigold suit and matching print shirt are so declarative and so focus-pulling (note how colorless that bathroom is), the audience member can’t help but notice it and feel not just its importance, but how disorienting it is because it’s not how they remember the character. The roughly ten minutes comprising the Cafe de Paris scene in Last Night in Soho, director Edgar Wright’s stylish unpacking and deconstructing of London in the swinging sixties, remains our favorite sequence in any film in 2021. Those minutes are perfectly, purely cinematic; the way that every element of the filmmaking – the lighting, camera movements, art direction, sound design, acting, casting, costume design and music – all combine to make for a sensory experience that keeps building in intensity. This is Anya Taylor-Joy’s introduction as Sandie, the would-be It Girl of the London nightlife scene, in a pink mini-dress with diamante trim and matching silver slingbacks. The look is stylish, sexy but coquettish, perfect for dancing, and glamorous enough to turn heads and keep all eyes on her. The dress not only tells you everything you need to know about Sandie, but it handily explains why present-day Elle (Thomasin McKenzie) becomes so obsessed with her. For the rest of the film, this dress will be referred to, redrawn and remade several times over, becoming a visual representation of two different women, with very different, nearly contradictory meanings for each. Iconic in the correct sense of the word.

Next up: Things get a little more subtle in Part Two.