Home » Fashion » Zendaya in Rick Owens at the “Dune” London...

Zendaya in Rick Owens at the “Dune” London Premiere She did it again, you guys. Or as Lorenzo put it, when Tom showed him the pictures last night: 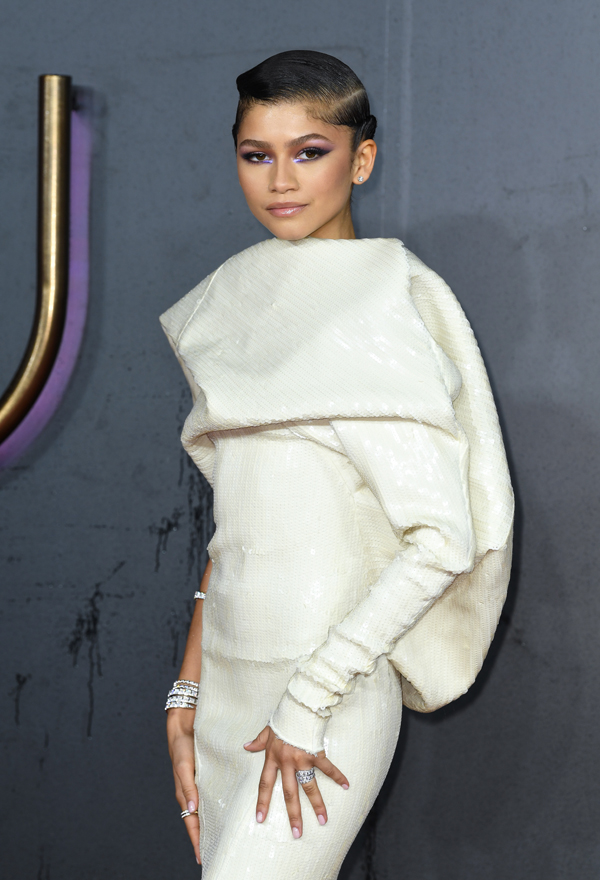 Which, if you haven’t listened to our podcast (and shame on you if that’s true), is Lo-speak for “I am enjoying this fashion moment very much and admire the wearer for her adventurous choices and ability to routinely pull them off.”

We can sometimes be a little bit ambivalent, if not downright oppositional about dressing for the genre. The idea is that you dress a certain way for a prestige Oscar film, or a rom com, or a period drama, or a superhero film, etc.  We used to consider it an important tool in the world of red carpetry, but we think one too many stars veered a little too close to cosplay over the years and now we feel like it’s as much trap as tool. It got too predictable and obvious, we think – especially with the prestige films and the superhero films. But if there was one film on the calendar this year that called for such an approach, not to mention one actress/stylist team who would know how to avoid being cliche about it, it’s Zendaya hitting the Dune promo trail with stylist Law Roach at her back. This is STUNNING and definitely has not only a sci-fi feel to it, but a specifically Dune sort of aesthetic to it. But she and her team know how to turn any look into a high fashion moment and not have it come off looking like cosplay. LOVE the hair and makeup. Previous post:
Duchess Kate at the Taking Action on Addiction Campaign Event Next Post:
We have Thoughts on the “Being the Ricardos” Teaser Trailer, with Nicole Kidman and Javier Bardem