Well damn. We’ve all been waiting so long for the much-promised “game within a game” that when it finally arrived, we think it caught everyone off guard by being the one thing no one expected during all this waiting: an astonishingly entertaining hour of Drag Race. We all expected that there would be some sort of showdown and we suppose we assumed it would be lip syncs, but we didn’t expect to find out that there really was a game happening alongside the main competition all along. Shooting each eliminated queen’s lip synch week after week, in real time, in front of an ever-changing panel of judges from the entire season up to that point, was a fabulous way of raising the stakes and the drama level. It was truly fun to watch the top four queens just sit this one out and be our drag Greek chorus, reacting to the drama in front of them – and us. Despite Trinity’s entirely expected sulking, structuring the eliminated queen’s return this way and making the competing queens watch it play out is likely to reduce any sense of resentment among the other queens. Whoever wins this series of showdowns should more than prove her worthiness to be in the top five. Of course, Ru being Ru, the decisions made along the way come with a lot of questions about how fair the outcome may be. Let’s roll the tape, shall we? The ruling could’ve gone either way. Serena was more energetic and more kinetic, but Jiggly gave her version more emotion and attitude. That latter quality is pretty much the defining criterion for winning this particular version of the lip sync. Ru is looking for attitude and entertainment value over precision or choreography. We thought it was pretty clear that Jiggly’s look and performance were more suited for the song, but Silky came prepared and she established her game plan for every lip sync going forward. Ms. Ganache would be relying on gimmickry from here on out to dominate the competition. We can see the argument that her boldness and inventiveness, not to mention the sheer entertainment value of watching her mix and drink a cocktail mid-song, were what pushed Ru to give her the win, but we can also see that she spent a portion of the lip sync not lip syncing at all because she was sipping her drink. If Ru’s willing to reward a gimmick that actually prevented a queen from being able to lip sync, then you may as well forget about learning the words or doing your splits.

Silky Nutmeg Ganache vs. Yara Sofia: “Point of No Return” by Exposé The thing is, Silky was clearly being very smart in her approach. It’s interesting to watch the lip syncs get more and more competitive with each new queen, because the later her elimination, the likelier she is to be really talented. Yara came to this one hungry, with a really gorgeous costume, but she gives us the sense that she feels like her talent and her career speak for themselves and that these challenges aren’t really her thing anymore. Silky came with a pretty good reveal and the best hair and makeup we’ve seen from her yet. The water bottle gimmick was too low-rent to be all that funny, but you can see her stepping her game up with each showdown.

Silky Nutmeg Ganache vs. Scarlett Envy: “Song for the Lonely” by Cher Scarlett came out serving some absolutely STUNNING drag and, in our opinion, connected to the song on an emotional and performative level that Silky never came close to. But Silky came out in her best drag yet and she twirled a flag, which is all she needed to do for this one. Mama Ru never really warmed up to Scarlett. A’Keria always struck us as a little self-defeating, so it’s not too surprising that she was the one queen who refused to play the game within a game. We sort of got the impression she was halfway regretting it even as she was turning it down. But here’s where Silky really sealed the deal for herself, we think. Despite the fact that all of her lip syncs required gimmicks to work and almost all of her costumes have serious issues that we shouldn’t be seeing on an All-Star level, the bitch will do whatever she has to in order to entertain Ru. Half-and-Half drag has a very long history and we’re kinda bummed that Drag Race rarely ever showcases it (or worse, when someone like Ru acts like she’s never seen it before), but as sloppy as this lip sync was, we had to hand it to Silky: she made it fun. 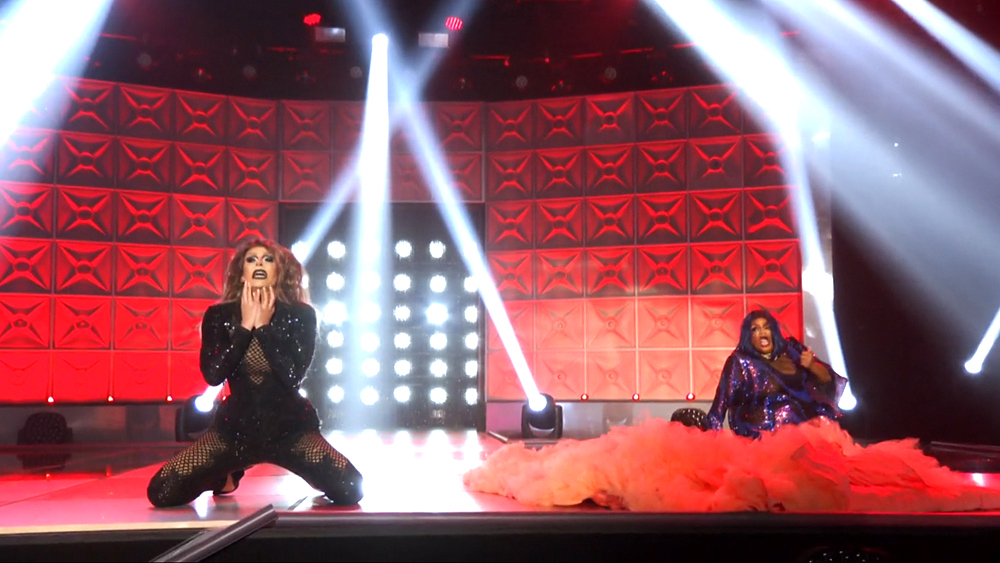 Ru and Michelle were just living for the playlist of their youth by this point. If nothing else, Silky deserves some recognition just for finding so many ways to interpret 40-year-old pop songs. But as we noted, each new queen comes out on that stage just a little hotter than the last queen Silky went up against. By every measure, Jan is a more polished and trained performer than Silky and serves much more high-end, well-rendered drag. But Silky had a prop guitar and that was all she wrote for Jan. By this point, the outcomes weren’t really all that surprising. We’d say the fix was in, but this is less about Ru bending the rules to let a fave sweep her way through as it is Ru always loving the rough and hungry queens over the polished ones. It’s not fair, but it’s not unexpected either. Still, it was one hell of a showdown and Silky smashing the guitar at the end left no doubt who the winner was. Pandora came out serving some really beautiful drag and we felt like there was a possibility that she might have stepped her pussy up enough to be a real challenge to Silky. Ru didn’t seem too pleased to see Silky show up in a pair of sneakers (most of her footwear has been of the sensible and comfortable variety while going up against girls doing splits in stilettos), which had us thinking that there was a possibility her chances were fading as she went up against the final two girls. But we’ve gotta say, Silky delivers exactly when she needs to deliver most and while Pandora gave a lovely, if restrained lip sync, Silky tore the floor up. She just connected to the song in a way Pandora couldn’t manage.

Silky Nutmeg Ganache vs. Eureka: “Since You Been Gone” by Kelly Clarkson And this is where we’ve got to stop for a minute and give credit where it’s due. This setup worked spectacularly to raise the stakes with each showdown. By the time Eureka hit that stage, we were on the edge of our seats. This was a real showdown, as far as we’re concerned. We just watched Silky smoke out a bunch of prettier, thinner girls with much better drag and in some cases, much more developed skills. Going up against Eureka, a queen who can meet her size, means she can’t just rely on boldness or gimmicks. And Eureka is one hell of a lip sync assassin who can wring entire telenovelas of melodrama out of one verse. As Ginger rightly noted “This is gonna be a bloodbath.” Possibly sensing this ahead of time, each of these queens brought their mamas to the lip synch – which is when you know things are about to get dramatic as fuck. Silky told the tale of her mother’s weight loss using a bag of chips and an inflatable jumpsuit as her gimmicks and Eureka wore her mother’s LifeAlert monitor around her neck so she could feel her during the song. Call us biased, but we tend to think Eureka’s backstory was WAY more touching and emotional than Silky’s and we think that showed in the performance. Silky couldn’t even complete her reveal because her jumpsuit got caught on her leg. We don’t think there’s any question that Eureka aced this one. Or we wouldn’t, if Ru wasn’t so enamored of Silky. We’ll just have to see how this shakes out, but one thing’s for sure: this was the most entertaining episode of Drag Race we’ve seen in ages. Even if you don’t think Silky’s ascent was entirely fair or on the up and up, it was incredibly dramatic watching these showdowns happening week after week, recorded in real time, raising the stakes just a little more each time. Kudos to the producers for a great hour of reality television.