We’re going to go out on a limb here and suggest that when one reads the words “Marion Cotillard in Chanel at Cannes,” one is not likely to picture anything like the following two ensembles. It’s fun! It’s Frenchified! It’s quirky! Sure, overalls are a demonic garment most of the time. And sure, we hate the fringe elements (and truth be told, we’re not thrilled about the return of flares). But it really is a cutely weird look made more perfect by the addition of those shades. We can’t quite see what that textile is, but it looks to be either a denim, velvet or corduroy, all of which make the pairing with a sequined top seem like a pretty crazy idea. That it appears to have worked is either a testament to the design or a testament to her. It’s all fun and unexpected, which feels right for right now. 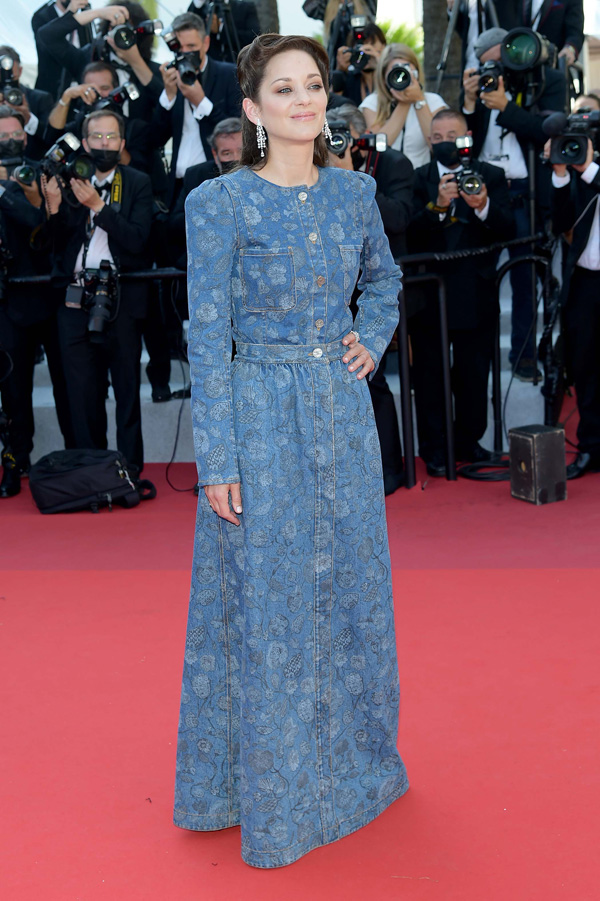 And then this happened.

In a way, this feels very appropriate to the moment. After all, if you’d told us during the height of lockdown, when we were ready to start eating wallpaper, that Marion Cotillard would be showing up at the post-lockdown Cannes film festival in a (pause for effect here) … Chanel denim gown, we would have found it a completely acceptable response to the utter weirdness of the last year-and-a-half. It still sort of does feel that way. Go on, girl. Wear the hideous gown that never should have seen the light of day. Disrupt the shit out of the red carpet. Burn it all down.

Alas, it’s just a poorly considered gown, not a statement on the world. Denim is simply not one of the House of Chanel’s fortés. We respect the attempt to step outside the expected, but as a design, it’s not just wrong for Chanel, it’s wrong, period. Having said that, the textile is cute and we wouldn’t mind seeing more conventional applications for it, like jeans, jackets, and minis. Bo more overalls, though.