This was not a great episode. There, we said it. We tell a lie (to borrow a Britishism); it was good for one very important thing, but bad in all the parts that were supposed to be entertaining. 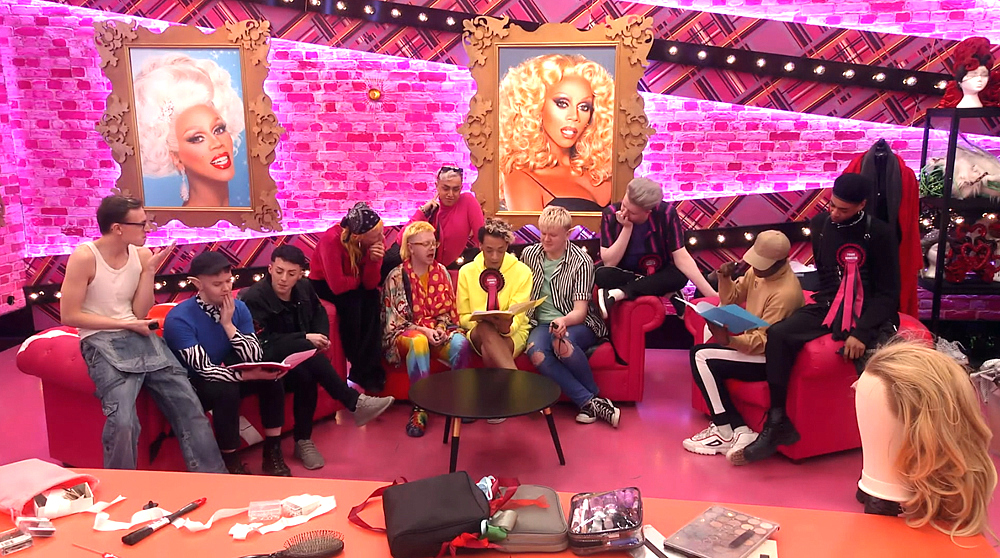 In the first few episodes of any Drag Race season, the viewer is faced with a whole gaggle of queens clawing at each other for more camera time, which can make it tough for a viewer to get a handle on who’s who and what’s what. This episode felt like it was devised to ensure the viewer had the lay of the land, so to speak, by the end of it. Nearly every queen got a moment to explain who she is, to show off what’s she’s about, and to unwittingly demonstrate their own personality flaws and competitive weaknesses. The results were pretty illuminating because we came away from this episode with our minds completely changed about several of the queens. Some of the ones who seemed the most interesting last week came off really weak this time around and a few queens who came off like cannon fodder last week came out of this episode looking like frontrunners. On that level, it was a well-produced hour of reality competition television. On the hair, makeup, performing, costumes, and lip-syncing fronts, however, this one was really rough to sit through. Sorry to say. We *ahem* wrote a book delving into drag history and because of the framing device (Drag Race itself), we wound up having to restrict most of our writing to figures in American drag. We spent a lot of time in the research portion reading up on the history of drag in England and Australia before cutting most of it out. We would never, under any circumstances, put ourselves forward as experts on British drag, but something struck us about it years ago while researching it and we think some of what we surmised back then played out a bit in this episode. 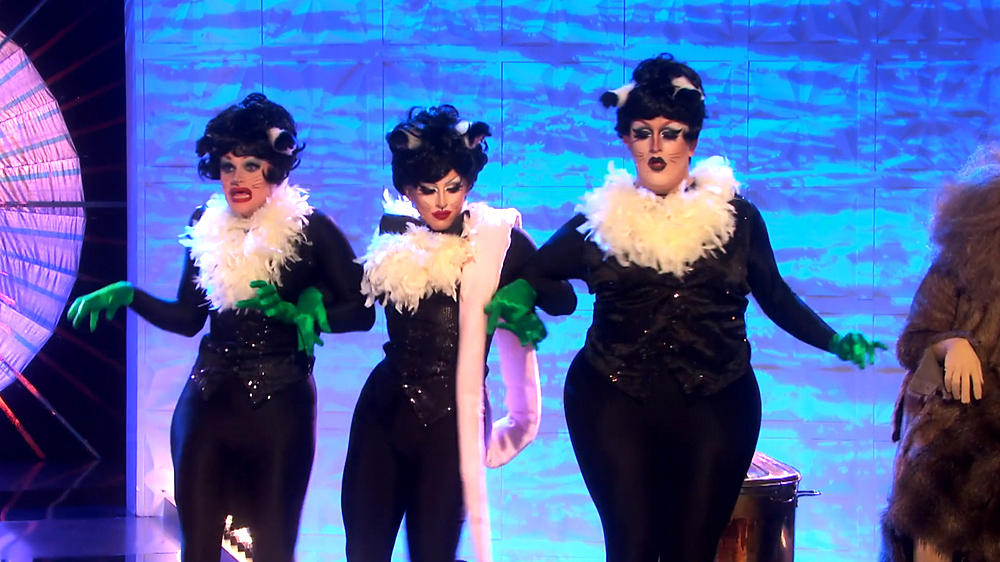 American drag, and thus classic Drag Race itself, has three main influences: Hollywood, drag pageants, and the ball scene. Of course Great Britain has its own entertainment industry, its own pageants, and its own ball scene, but we don’t think any of them have been nearly as influential on British drag as they have been on their American cousins. In the broadest sense, British drag arose out of the theatrical, cabaret, and pantomime traditions and is MUCH campier than American drag and FAR less interested in turning out sickeningly flawless lewks. We love that, and we loved that both the UK and Canada franchises tend to spotlight much rougher queens than the uber-polished beauty queens of the American version. Having said that, there was a lot of grossout drag in this episode. A lot of blood, pus, mangled faces and hairy asses we really didn’t need to see. That’s all fine for its own sake, because we’d never want British queens to act more like American ones, but you add an entire Ru-sical about rats that goes out of its way to be gross and, well, we’re just glad we weren’t eating while watching any of this. To be fair, our constitutions aren’t as delicate as we’re making them sound. We wouldn’t be making this critique at all if:

a) The girls had managed to turn out well-executed looks, and

b) The musical wasn’t one of the worst in the franchise’s history. Maybe a bunch of supremely talented and polished performers could make a musical about diarrhea, disease, rashes, and rat nipples into an entertaining romp. There have certainly been plenty of much weirder successful musicals in theater history. But almost none of these girls showed any true performing talent. That tends to make for great drama and as always, the show loves nothing more than making a queen cry in the hopes that she’ll overcome her “inner saboteur” and triumph. That really didn’t happen here; not for most of the girls, anyway.

Which isn’t to say that none of them did well with the challenge. Veronica ate everyone else up; a development that thrilled us  because just last week we said she had to step her pussy up or get overwhelmed by all the bigger personalities around her. And we thought Lawrence, while clearly not one of the best on the stage, acquitted herself fairly well just by getting through the number without any major disasters. In fact, we can point to a lot of weak performances, but we really can’t single any one girl out as a major failure. If anything, we admired how hard they were all working to pull it off, which brings us back to our main complaint: The Ru-sical was just plain bad. We might have felt a lot more kindly toward the girls if that were the only issue. If they’d followed up a poor musical sketch with a sickening runway, this would have been a very different review. But these were some of the poorest reveals we’ve ever seen. Some of them were so bad that we honestly don’t know what those girls were thinking. We said that British drag doesn’t always place flawlessness at the top of the list, but even so. These efforts were really disappointing to see, especially since there were some pretty decent costumes in last week’s runway. A’whora acted like she came up bride-and-groom drag when it’s one of the oldest drag tricks in the book. If you’re gonna go there, you better turn out something gorgeous. We should stop here and note that a lot of these girls talked about making their own costumes and that’s something we really like to see. It gets boring when every queen shows up with tens of thousands of dollars of stagewear costumes (see: Pie, Sherry). Even so, a hot glue gun and some crystals would’ve done a lot to make this bridal look pop. It just looks flimsy and half-done. Lawrence’s concept was good, but again: that’s a pretty flimsy-looking and unimpressive dress. Lemon will always be high camp and that’s great, but ripping open your dress to reveal the same dress underneath, while cheeky (no pun intended), is clearly not what the judges were asking for. We think her uniqueness is really helping her sail through. Cherry had herself a bad week. Her performance was weak and her runway looks equally so. There’s no there there. And her makeup looked terrible. We love Tia because we think she’s dryly funny and really good at shade, but that wig is atrocious and that dress looks the one thing no costume should on Drag Race: off the sales rack. The judges loved her leather daddy look but we thought it just looked odd on her. It didn’t read “man” at all (which is ironic, we know). She was a standout in the musical, though. Probably saved her. Elle’s Wizard of Oz-themed costumes were cute, but none of them went quite far enough (although that may have more to do with the number of them). She was surprisingly good in the musical. Asstina is the only one who came close to giving us something Drag Race-worthy, although we weren’t in love with the mangled mouth. Still, her body looked amazing in that. We can’t say we were in love with Sister Sister’s look, but at least it was a whole-ass look and not something flimsy and underdesigned. Veronica really shocked us – and everyone else – this week. Bimini keeps talking a good game and never quite delivering – although she did bring everything to her musical performance, which was appreciated. Reveals are gimmicky to begin with so we don’t know why she’d want to add a further gimmick with a high likelihood of going wrong. Nothing about her costume made much sense and we’re kind of shocked the judges aren’t raking her over the coals for her non-tuck. Loved the wig, though. Bitch is a serious contender. Her musical work was nearly flawless, as was her final runway look. She was the only real choice for the win. Call us cranky at this point, we’ll cop to it, but it takes a certain kind of queen to be able to make a “Memories” lip sync actually work. These gals may have had the judges in tears, but we take that shit with a grain of salt since they also tend to fall out laughing at anything mildly humorous (and a few things that aren’t that at all). You either have to be a high camp queen who can find the comedy in the song or you have to be diva supreme who can bring the emotion through her performance. We don’t think either of these girls managed it, but Cherry had the weaker look so we guess it made the most sense to send her packing.