Okay boys, now get in formation. And by that we mean line up for some harsh judgment and uncomfortable objectification. As much as we rag on Brad Pitt for hiding the hot – going so far as to coin the term “Pitting it” for any pretty male star who dresses like he slept in an alley, this dude may just be the absolute worst case of it in pretty male celebritydom. What is this Men’s Wearhouse nonsense you’re sporting, sir? Tsk. Look, the proportions are weird and he kind of looks like Dracula at the Prom, but we’ll take it over the mortician and preacher drag those last two were sporting. At least he tried to do something. And we’d argue that face calls for drastic and severe fashion and it’s to his credit that he seems to get it. He’s doing the JC Penney catalog modeling poses, which is a shame, because as much as we dislike turtlenecks with suits, we feel like he’s pretty close to pulling this off. It helps that the suit is well fitted. We don’t mind the look, but the suit just barely fits him and we tend to think a white tee-shirt and kicks aren’t quite the right look for a holiday season movie premiere. 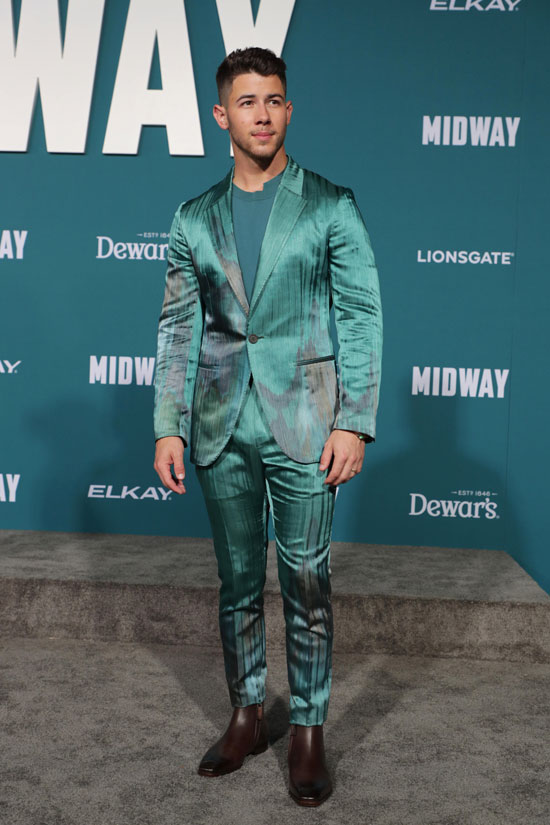 God bless this little attention whore. This is quite the flex but we would expect no less from Nicky Tryhard. It’s fairly hideous, but we honestly do appreciate the attempt to wear something bold and different. We just can’t get behind the shininess or the color.