Home » Fashion » Friday Leftovers for the Week of February 17th,...

Friday Leftovers for the Week of February 17th, 2019 Kittens, with the Oscars looming on the horizon, this isn’t so much a bunch of leftover looks as it is a clearing of the decks, before we head into a working weekend. So let’s get to it, shall we? These people need to move it along and they won’t do it until they hear what we all think of their style choices. Star Trek cocktail waitress. Lady, we love you, but no. It’s a cute dress and we think it’s fine for her, but the styling is disarmingly juvenile. This girl has such a knack for finding the goofiest pieces and then putting them together to make them even goofier. It’s a cute dress, but we hate the sleeve length and possibly also the hem length. Also, gold pumps would’ve been more fun. Her hotel caught fire in the middle of the night and she just wandered over here while she’s waiting for the all-clear. Good lord, no. We love Thom Browne, but that is NOT a good frock. LOVE. It’s so perfectly suited to her. We’ve seen her in much better, more flattering suits than this. Kinda love this. There’s a simple elegance to it all, elevated by the unexpected combo of colors. Didn’t need such a complicated sash, though. 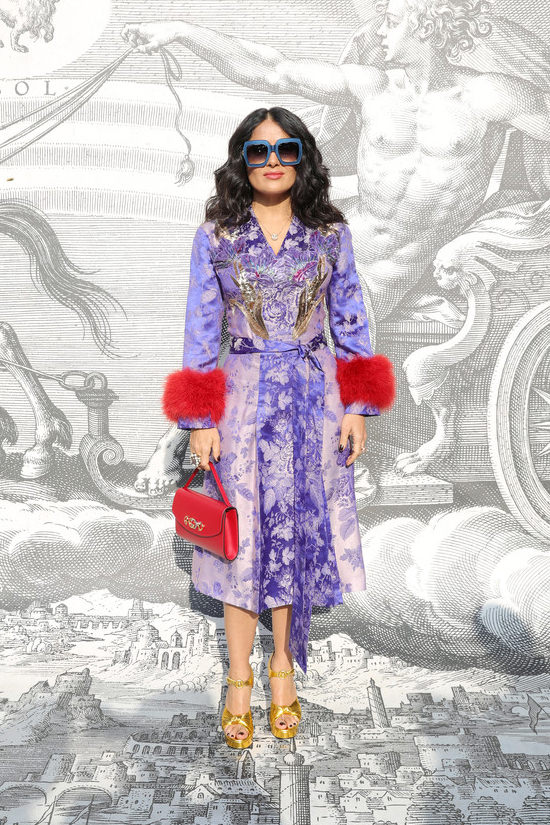 She’s back to her Edina Monsoonery. The mismatch on that pattern is driving us insane. Super-cute, with just the right level of grownup sophistication. She looks great, but now we’re starting to wonder (Carrie Bradshaw voice): Is the white pantsuit quickly becoming a cliche? Looks pretty great to us.

Okay, darlings. That’s it for this week, but we won’t be taking the weekend off. We’ll be posting our thoughts on the pre-Oscars whirlwind of events this weekend, so come back for all the fun and bitchery with your weekend morning coffee and get the lowdown. If you’ll excuse us, we’re off to do some stretching, take some extra vitamins, and do some carb-loading in preparation.