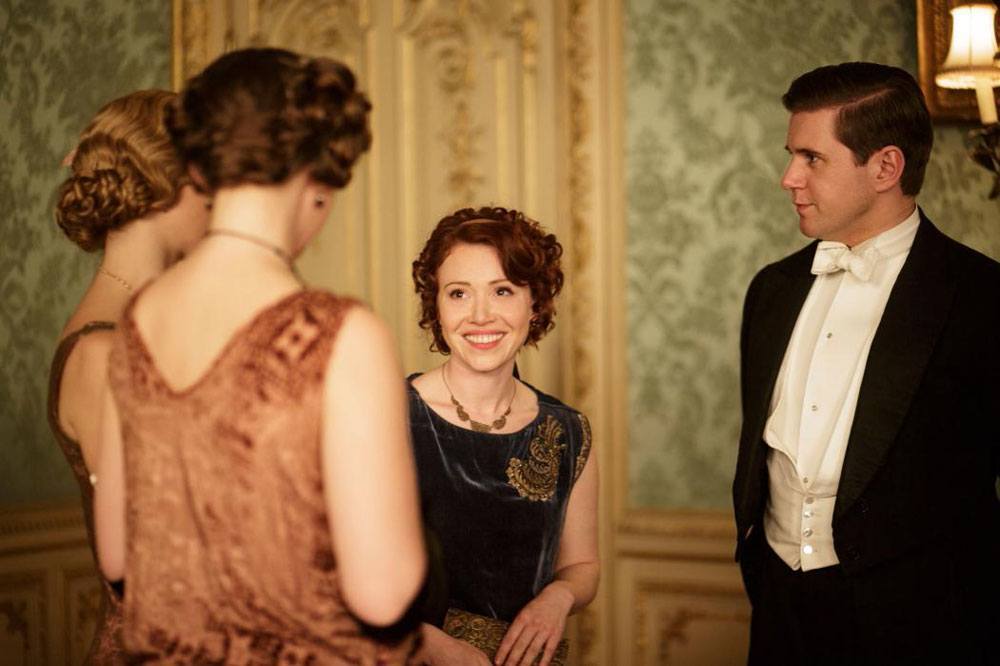 Like slipping into a comfortable pair of slippers that make you feel slightly ridiculous for wearing them, Downton Abbey‘s return was everything a fan of the show could want it to be: a silly, simmering soap opera with cinematic production values and gorgeous costumes. And when Downton is firing on all cylinders (as it was here), it’s a giant ass-fest.

Edith is once again making an ass of herself.

Thomas once again gets his ass saved at the last minute by Julian Fellowes (the living deus ex machina for conspiratorial, unhappy gays).

Lord Grantham is, as ever, a jackass.

Lady Grantham, as ever, wouldn’t know her ass from a hole in the ground.

Miss Bunting is a smacked ass.

And the Dowager Countess continues to invite everyone to kiss her aristocratic ass.

That opening shot of Isis’ dog ass is merely a thematic motif, darlings. Downton is all about that bass and you didn’t even realize it, did you?

All ass talk aside, it was the perfect sort of season-opener; a checking in on pretty much every character and a confident dive right back in to the story. Julian Fellowes excels at this type of episode, producing a tightly scripted hour-plus that gave us the full breadth of the goings on Chez Grantham, upstairs and down. Everyone is just where we left them and, like clockwork people, are ready to move and speak the minute the spotlight shines on them  – and provide highly useful, if mostly implausible exposition to remind you what’s been going on with them. “But how shall I make Marigold, my illegitimate daughter that I had with my married, now-dead lover who was killed by Nazis way before it was a thing to be a killed by Nazis, a part of my life at Downton?” But who needs plausible dialogue from this lot? Verbal bitch-slapping, silly twists, and some lovely tweeds and gowns will do us fine, thank you.

And on that note, here is what’s going on at Downton:

James can’t keep his John Thomas in his pants.

Lord Gillingham sings a rousing rendition of “Let’s Get It On” to Lady Mary.

In return, Lady Mary sings a rousing rendition of “Like a Virgin” to Lord Gillingham.

The Dowager Countess feels a disturbance in the fabric of the aristocracy and moves to repair it before further damage can be done.

Edith spends far too much time with the lower classes to be considered healthy – or even proper.

Lord Grantham is a whiny titty-baby.

Carson is suffering from the worst long-term case of Stockholm Syndrome the world has ever known.

Tom longs to return to his socialist ways but dammit, the food at Downton is soooooo good. Mrs. Patmore, amiright? Power to the people and pass the butter!

Oh, you silly lot. How we’ve missed you all.

There are, of course, the usual list of annoyances. To wit:

Everyone stands around and gives speeches about big changes coming and how the ground is shifting under their feet and other such nonsense that has nothing to do with the way real people talk about the world. When Robert muses on the shifting values of the day, he sounds like a tour guide in a museum, rather than a person with true concerns. Even more silly is when the downstairs staff all have long conversations about the changing world, and where they fit into it.

As always, it’s all about the rightness of the aristocracy vs. the vulgar ways of the working class. The natural order of things is being upset because Lord Grantham is not on yet another local committee. But Carson will always do what he can to make sure the upper classes are safe from any feeling of inadequacy because, unlike whiny pains in the ass like Tom Branson or spectacularly inappropriate peasants like Miss Bunting, he understands the way things are supposed to be. Never a furrowed brow or hurt feeling among the upper class. It’s his life’s work to make it so. The Genteel Giant. As opposed to Miss Bunting, who all but stood up and farted her displeasure at the dinner table. It is rather hilariously awful the way Fellowes depicts anyone who questions the aristocratic way of life.

We can see we’re in for more of this tiresome “What class do I belong to?” crap from Tom. As if we’re supposed to worry that he’ll wind up living over a garage or something. Chauffeur, please. You love it all way too much to leave it. You’re just bummed because you’re not going to be allowed to marry into it again. In fact, we’d respect this storyline so much more if it wasn’t about the conflict between Tom’s socialist background and upper class pretensions. That battle’s been won. The real question here is whether or not Tom can stand an upperclass lifestyle without sex or companionship; if he’s willing to make that trade-off. But no, it has to be rendered in the simplest “Hasn’t Tom come so far since he learned the value of the aristocracy? Why would he want to throw that away?”

You see more of this in Violet’s fretting over Isobel’s entree into the aristocracy. It says something about how attached we are to these characters that we’re dying to see her become Lady Merton, even though we know it’s not something she wants for herself. Part of us fears this marriage may actually happen and Isobel will wind up humiliating herself somehow, Miss Bunting-style. But she and Lord Merton actually make a cute couple. Even Dr. Clarkson had to admit that one.

But like we said, at this point in the show’s run, it’s silly to expect it to be anything other than what it’s always been. Fellowes is always going to treat it first and foremost as a tribute to a time gone by, when people knew their places. As long as they manage to make a bitchy retort or two, have an inconvenient baby or affair, and wear amazing costumes, it’s all good to us.

Welcome back, Downton Abbey. We missed you, you silly thing.

Previous post:
Henry Cavill and Armie Hammer in “The Man from U.N.C.L.E. “ Next Post:
Julianne Moore in Delpozo at the 2015 Palm Springs International Film Festival