The most subversive show on television.

We try to stay out of the cultural/political arguments that have come out about the show in recent seasons, but one of the reasons it has been so fiercely defended by gay men is because it’s probably the truest representation of the gay male “scene” subculture, from drag shows to glory holes, ever seen on TV. And like The Village People back in the day, some of it goes over parts of the audience’s heads or is presented so wholesomely that you kind of forget what’s being mimicked here.  Not that we’re defending the show from the criticisms; especially the ones coming from the transgender community. Ben kind of got an easy win out of this one. All he had to do was yell and spew catchphrases to nail the impersonation. We thought Adore should have won it, because her Ben voice was eerily exact. Bianca did a pretty good job with Adore too. She’s serving up some Diahann Carroll realness but we have to say, we were getting a sympathy headache just looking at her. She is pulled tight. We tittered like teenyboppers when we saw him in person (at QVC headquarters, no less). Who do we have to kill to make sure we look like that at 74? We’re walking briskly past this part because it was lame and a little painful to watch.

As it always happens at this point in a reality competition, the remaining challengers realize it’s down to the wire and their insecurities come out. Ben and Bianca sniped at each other, Adore had another I-can’t-do-this meltdown, Courtney continues to fail to be funny, and Darienne, well she was always bitchy. 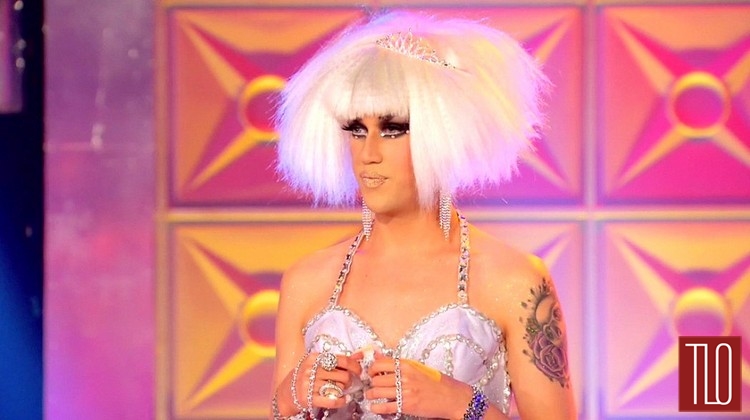 Did we predict this girl’s story or what? It was always Drag Cinderella. She was destined to discover herself on camera because that’s exactly what Auntie Ru wanted. In fact, we fear that she’s peaked too soon and now that she’s polished herself up and discovered some world class drag skills, her story is largely done, which means she can go home next week, if that’s the way it shakes out.

But we’re getting way ahead of ourselves. For now, it’s a well-deserved win. We think it was probably the banjee girl look that nailed it for her. She said she was portraying all the girls in her school and you could sense that she was pulling that character up from someplace inside her. And that’s the other thing – she’s learned how to go from creating looks to creating characters. Her executive realness was a nice change of pace. And we loved the fact that her wig and her skirt were shaped the same for the eleganza look. That takes an eye.

Granted, she did have some help from Bianca. We don’t know… it’s good, we suppose. But the eleganza looks like 90 percent of what she’s already worn on the runway. And the executive realness looks so … expected. The banjee girl looks just plain bad to us. Bianca’s got a lot of polish in her looks, but none of them have been particularly memorable or jaw-dropping. It’s her one big flaw. Okay, Banjee Girl was not great, Executive Realness was neither executive nor real (discuss), and the last look wasn’t so much “Eleganza” as it was “float in a parade.” We get all the criticisms from the judges and don’t particularly disagree with any of them All three of Darienne’s looks were worse by far. By a MILE. But once again, someone gets to stay in the game because she’s better at the lip synch. The only way we can accept that Darienne’s still in the game is if she goes home next week and doesn’t make it to the finals. It’s not that we hate her, but there’s so little variation in any of her looks. She’s reached the limit of what she can offer in the competition. We didn’t get that impression from Ben. We thought there was more to see.

So… Courtney, Bianca and Adore in the finals, yeah? Or will Darienne pull an upset and kick out either Courtney or Adore?