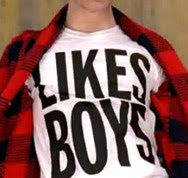 “The only straight I am is straight up bitch.”

We saw the writing on the wall halfway through last night’s episode. Actually, we saw the writing in the tweets and emails we were getting; writing which caused a cold rush of shit to the stomach when we realized that we were going to be, once again, seemingly on the opposite side of Gleekdom. It was kind of interesting, reading all these “T Lo, isn’t this episode GREAT?” messages while we struggled simply to stay in our seats.

It started off well, and to be fair, it ended well, but there was an interminable slog through the middle there. The plastic surgery story line seemed like a winner to us. It’s something that real kids talk about all the time. Like it or not, a generation of kids have been raised on the idea that they can, and probably should, buy physical perfection.

And we got a really great mashup duet. Who would have thought Quinn and Rachel would make good duet partners?

Of course, it meant that we had to jettison a lot of what we knew about these characters already, as we often have to do with this show. Suddenly, the Glee club cares so much about Rachel, even though no one has had a kind word to say about her in months (if ever), that they will all earnestly try to get her to love herself and accept herself. Also, Quinn didn’t have a life-changing experience last year that taught her the value of friendship and what the really important and meaningful things in life are. She’s just a shallow bitch cheerleader with a secret. The only really honest and in-character response was Santana’s. It was also kind of hilarious, we have to say; especially when she said Finn could dust his nipples with sugar and serve them as a dessert.

Hey, remember when Finn was the “leader” of the Glee club and got a solo or duet with Rachel almost every episode? Not that we want to see a return to that, but lately, and especially with this episode, we can’t shake the idea that Glee may have gotten just a little too big and a little too slick to maintain the original feel of the show.

Here was the exact moment it started falling apart for us. Tom turned to Lorenzo and said “It’s official. They’re zeroing in on the kids in the audience.” Parts of Glee – in fact, MOST of Glee – is now virtually indistinguishable stylistically from the High School Musical franchise. Nothing inherently wrong with that, but it’s not why we came to the show. A lot of the cynicism and comedic dysfunction is gone from the show now. Sue can’t call Kurt “Lady” because it’s hurtful; Emma’s OCD is no longer adorable or funny; it’s an Illness. These are true things. It IS hurtful to gay kids to be called names by teachers and OCD IS an illness. But the show used to gleefully (intended pun) wallow in a sort of “Oh lighten up” attitude instead of the message-oriented Afterschool Specials we’re getting now.

Good performance by Darren, though. One of the best he’s done.

Kurt, we love ya. Show creators, we love ya for doing the most in-depth exploration of gay teenagerhood that network television has ever seen. You’ve given us moments where we’ve laughed and clapped and even cried. How to put this in a way that won’t result in torches and pitchforks? You guys have taken it way too far at this point. In fact, we find Kurt just a tiny bit insufferable now. The entire theme of the show was dropped for 15 minutes of saying goodbye to Kurt/saying hello to Kurt, all with loving looks, hugs, heads on shoulders and even a standing ovation at the end. Yuck.

And to be honest, we’re more than a bit annoyed that this exploration of the pain of gay teenhood has been replaced with this enormous fantasy where the whole school – the place where Kurt felt so threatened he had to transfer out just a few months ago – stands around and watches Kurt’s boyfriend sing to him. Not only that, we get Kurt doing his best Norma Desmond and wandering the halls of the school, lovingly singing about the place from which he fled in terror, all to an adoring audience of peers who mostly used to make fun of him or ignore him. It’s a nice thought, but it’s not the reality the majority of gay teens are facing.

Definitely the best vocal performance Chris has ever given on the show, though.

Pure fantasy. We don’t actually mind it, though. It’s a fun scene.

And the show wrapped up quite well. It’s a great number, but does anyone else find it odd what Kurt’s t-shirt says? Wasn’t the idea that you were supposed to reveal the thing about yourself you DON’T like?

It seems to us that the episode would have been better served had they stuck both to the story about accepting yourself and the 60-minute timeslot. The 15-minute Kurt love-fest in the middle is really where things went awry.

The highlight of the episode was Santana, who had the best and funniest lines and who also has the best storyline going forward. We’ll praise the writers for that. With the Karofsky hookup – which managed to be funny, sad, and make perfect sense all at the same time – the countdown to prom just got a lot more interesting. And as she sullenly sat there in her “Lebanese” t-shirt (that’s a pretty crusty old joke, writers), we’re very interested to see how this is all going to play out. If she does decide to come out, what does that mean for Karofsky?

We can accept the show’s turn towards its teen audience. That’s where the money is, after all. It’s not a criticism to say the show has done this. It’s just that we’re a lot less invested in things now that the show has mainstreamed itself so much and we miss the darkness on the edges that originally made us fans.

Previous post:
RPDR Finale: Who’s the Fairest Queen of All? Next Post:
All On The Line S1E5: Dana-Maxx