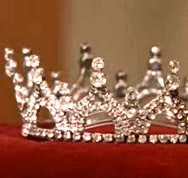 It struck us last night while watching this episode that this season, much more so than last season, we find ourselves thinking “Well, this one’s for the kids,” meaning, we’re just going to have to accept songs and storytelling conventions that, well, might not resonate as strongly with those of us well past our teen years. The show’s always straddled that line in order to appeal to the widest audience, combining teenage angst with middle-aged cynicism; Top 40 with Broadway and classic pop. But we definitely feel this season’s slow turn toward fully embracing (and openly selling to) its teenage audience.

So our cynicism was in full bloom before the episode even started because this episode’s conceit of using original songs keeps the money in the family, so to speak. And it’s a high-earning family as it is. Glee has become not only a television juggernaut, but a recording one as well. Why waste that opportunity only on cover songs, which have to be paid for, when you can write and own your own? In a lot of ways, it was inevitable. Still, they did a decent enough job making the reasons for it plausible and had some fun with the idea. After all, no one can deny that “Trouty Mouth” was a hilarious moment. “You can suck a baby’s head” had us roaring.

As soon as this number started, we groaned a little. Nothing against the multi-talented Darren Criss, but every song is sung and staged exactly the same way. Blaine is the male Rachel Berry. The same facial tics and body movements punctuating every song. She squeezes tears out and looks to the heavens, he cocks his head, grins, and points just before opening his mouth wide enough to swallow a kitten. It probably makes the young ‘uns happy, but we’re a bit more than over it at this point. At least they had Kurt say what so many of us were thinking. We thought for a moment that Blaine was going to turn out to be snotty and problematic (a la Rachel), but they surprised us.

Okay, first: Kurt’s mourning clothes are hilarious. Second: what’s with the Beatles songs for Kurt? No complaints; just wondering if there’s a reason why. And third: they did it again. They completely blindsided us and while we wondering about the above, they quite unexpectedly gave Blaine exactly the same moment Kurt had when he watched Blaine sing for the first time. It was utterly charming and we really weren’t expecting it. Sure, we know a Kurt and Blaine romance was coming in some form, but just like Kurt’s face melting at the sight of Blaine singing “Teenage Dream,” Blaine is depicting (beautifully, we might add) that rarely depicted moment of when a boy falls in love with another boy. We thought THE KISS was also an adorable scene. We wondered if they were going to be able to make a romance seem believable (because it’s been totally one-sided up until now), but these two actors have a ton of chemistry. Totally, absolutely charming and just as with “Teenage Dream,” we hope a hundred thousand gay boys saw that last night and slept with a smile on their face, hoping for the best.

“Trouty Mouth,” “Only Child,” and “Big Ass Heart” were all fun, but this was AWESOME. There has NEVER been a Mercedes solo that wasn’t crazy entertaining. The lyrics here are hilarious.

Here’s where our grownup cynicism reared its head. Darren and Chris’ voices don’t actually blend that well, unfortunately. The number was sold solely through their acting and we admit, it was ridiculously sweet. The last two closeups as they sing the final notes to each other was powerful and romantic. We totally buy the couple and we’re a little breathlessly thrilled to see something like this given center stage on a hit network television show geared towards the young. Our real world experience had us squirming in our seats, however, because as romantic and beautiful as it was to see two cute boys sing a love song to each other, we knew it was going to cost the team a win. In a way, we’re glad the show made that point. It would have been naive and a bit dangerously false to sell the idea that two gay boys acting like that (i.e., the way every other kid is allowed to act) on stage isn’t going to get some sort of backlash.

Yes, we’re a bit tired of the Darren solos but we have to admit this was a good one.

Like we keep saying, Rachel only works when she wants something really bad and can’t have it. This was the do-or-die moment for the whole original songs concept and we think they nailed it. It’s not really our taste, this song, but it’s an almost perfectly (some might say cynically) realized musical version of teen-girl angst and likely to sell very well to that market.

We also want to make a sideways shoutout to the scene between Rachel and Quinn, where the writers deftly made the latter seem like a real person with insecurities and fears and disappointments rather than just a bitch cheerleader. Her rather – dare we say it? – cynical view of the life she and Finn will have vs. the life Rachel will was, sadly, probably very accurate.

And finally, the most cynical moment of all, as the show finally gets a theme song and what will more than likely be a lucrative addition to the ever-expanding Glee catalogue. Still, while it was so openly a pitch to the teens in the audience, we can’t say we didn’t love the song a little. Fun AND they’re subtly addressing an issue facing kids – bullying – in an empowering and entertaining way.

Pretty much a perfect hour of Glee, we have to say. It only makes us wish the show could be like this every week, but we’re a bit too … wait for it … cynical for that.