Once you start looking at the fashions of Mad Men from a character perspective, a whole bunch of doors open up unexpectedly. Nowhere in any of our plans for this series did the names of Mona and Margaret Sterling (played by Talia Balsam and Elizabeth Rice, respectively) come up. They were fairly peripheral characters, after all.

But we’re having so much fun writing these entries that even if we didn’t have a lot of analysis to offer, we could still look at some amazing period clothes depicting women of the same social class at different ages. That social class would be “upper,” by the way. The most upper class women on the show, actually. Margaret was the spoiled rotten brat and Mona was the well-preserved and well-kept wife. There was (and still is) an entire mini-society of these types living in certain Manhattan enclaves. In fact, some of them still dress this way. 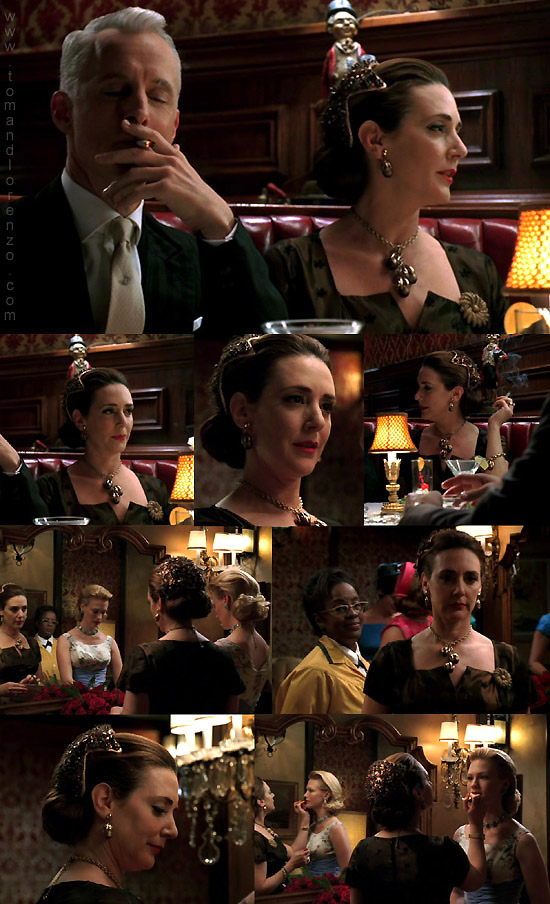 Don and Betty come into the city to have dinner with Roger and Mona. Betty is meeting them for the first time. She’s nervous and talks too much which Roger (typically) ridicules when she’s away from the table. Mona seems amused. Actually, “Mona seems amused” could have been the stage directions for any of her scenes in Mad Men. In a show full of cynicism, Mona Sterling’s brand of it was all-consuming. Life with Roger Sterling will do that to you. She doesn’t particularly care about Betty and her nervousness. Been there and done that.

It’s 1960 and these two gals are DEFINITELY still living in the ’50s. We’ll get to Betty’s Grace Kelly costume later, but for now, let’s look at Mona’s. It’s dark, in contrast to Betty. It’s heavy-looking and speaks of both her age and her tax bracket. Note the dowdy little hat and how she’s almost literally dripping with jewels. Mona always stood as a warning to Betty; a representation of what she was going to become if she stayed with Don. The message of this scene was that Don would make her rich, but he’d never make her happy.

It’s amazing how aging some of the clothes from this period could be.

Mona shows up in the office with Margaret and asks Joan if she knows which hairdresser “all the girls are going to” because she’s decided it’s time for Margaret to lose the ponytail. Mona is indifferent to Roger and Margaret is downright cold to him. We find out in this episode that Joan and Roger are having an affair and that his home life frustrates and confuses him. His wife and his daughter can’t stand him and he doesn’t know why.

You don’t even need to introduce the characters; there can be no doubt that this is a mother and a daughter. One look at their clothes will tell you that. It’s almost laughable how much their clothes call back to each other. Total “Mommy and me.” While they’re both in matching outfits, Mona wears a sensible and mature plaid and Margaret is in a youthful floral that plays well off her sullen expression. Mona is looking a little more fashionable here than she did in the restaurant scene with Betty. We like to think she took one look at the 1960 model ad wife and decided she needed to update the detailing. 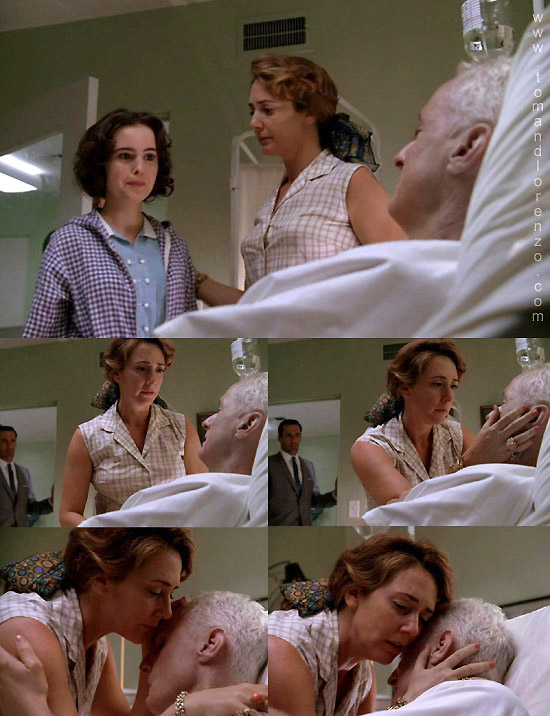 Roger is revealed to be an even bigger cad – it’s 1960; we can say “cad” with a straight face – than the audience thought and has a heart attack after riding a 20 year old model around through the SC offices like a horse. In his underwear.

Anyway, the Sterling gals were weekending out of the city and here they are once again in matchy-match outfits. Look at how a decade falls off Mona when she’s not dressed in those over-done wealthy-woman outfits of the time. Roger, convalescing after his heart attack, is forced to come into the office to meet with a client, against Mona’s wishes. He has a second heart attack. Mona angrily confronts Bert Cooper in the hallway and tells him to go to hell.

In a scene that was all about the war between home and office, it’s off-putting that Mona is dressed exactly in the tones of the Sterling Cooper office. If she moved a little to her left in some of those shots, she’d blend right in with the office door. Mona’s not the “fade into the background” type so in order to sell the point that home always loses out over office, she had to literally be dressed in the winning team’s colors. 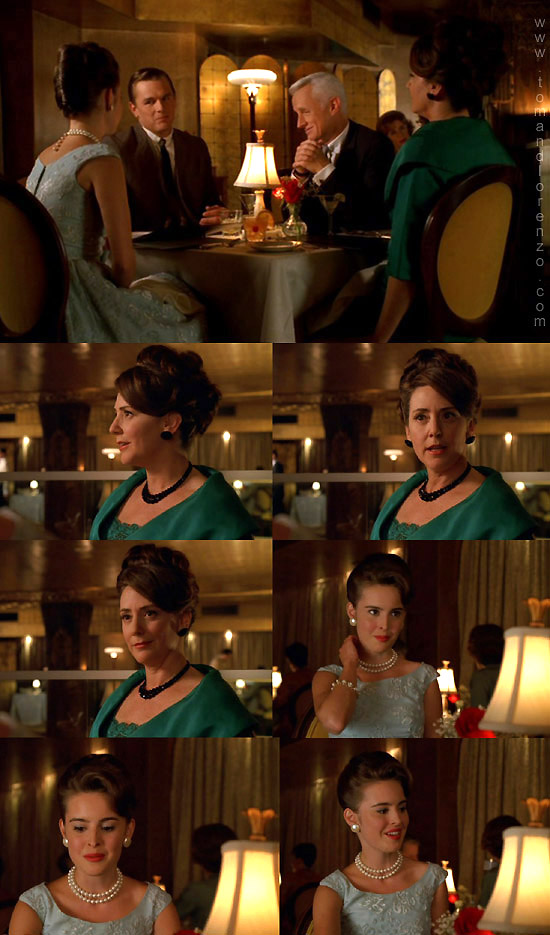 Dinner with the Sterling family, in which Margaret and Mona argue over her upcoming wedding. Mona reminisces about her wedding to Roger. Roger pouts and wisecracks.

Could the “Mommy and me” look possibly be taken any further? Especially since Margaret looks like she’s about 12? The hairstyles, the jewelry, the colors, and even the necklines are all saying that this is the same woman at two different stages in her life. 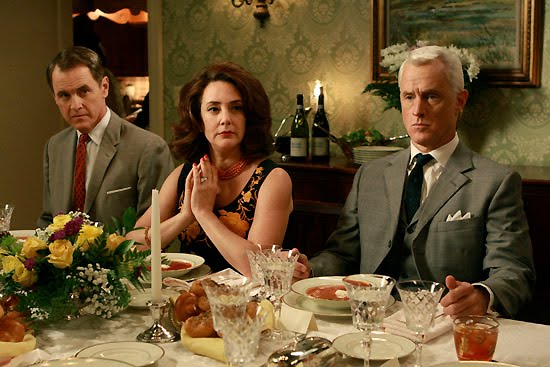 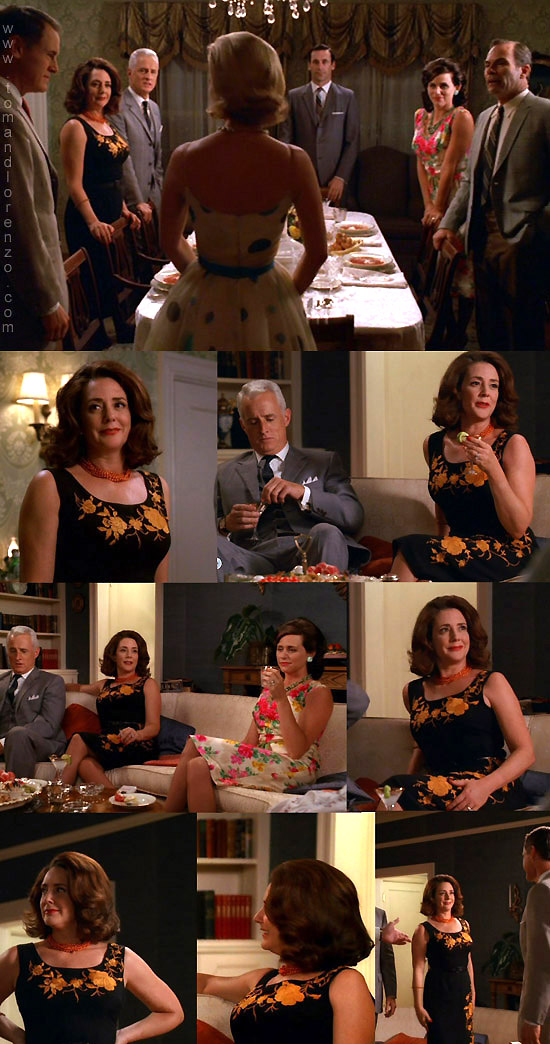 The Drapers host a career-based dinner party and Mona is once again amused by Betty’s barely-concealed fury over being revealed as something of a pawn in one of Don’s marketing ideas. The real root of her fury came from finding out about Don’s affair with Bobbie, something that she hasn’t confronted him about yet. In other words, the entire dinner party was a theme and that theme was “The Drapers’ Marriage is a Mess.”

So what does Mona show up in? A sexy little party dress of course. Depending on the scene, Mona is dressed according to the other women in the scene. Normally she’s dressed to serve as a counterpart to her daughter, but when she’s with Betty, she’s dressed to illustrate their differences. The hair is big and the dress is bold. Betty is a flouncy little cupcake in frosting colors and Mona is a dark column. It’s kind of interesting to note how much this looks like a dress Joan wore in Season 3 when she hosted her own dinner party.

Mona comes into Don’s office and reveals that Roger is leaving her for someone else, that someone being Jane, Don’s secretary, although Mona clearly doesn’t know that yet.

We’re back to dowdy in a big way. These are no doubt expensive clothes, and to be fair, they’re very fashionable, what with the sheer sleeves and the pillbox hat. We’re not back to the ’50s dowdy we first saw her in, but it’s definitely an “ex-wife” dowdy in comparison to Jane’s youthful presentation. She is once again wearing very obvious and very obviously expensive jewelry. She made a deal with Roger in exchange for a certain lifestyle.

Margaret and Mona come into the office to discuss Margaret’s wedding plans. She has a major bug up her ass about Jane attending the wedding. Mona reveals with barely-disguised relish that she is also bringing a date to the wedding.

Look at how fabulous Mona looks! She’s in black but she sure ain’t mourning. Gone are any traces of the mature dowdiness that characterized most of her outfits. She looks sexy and fashionable and like she’s decided that the best response to her divorce is to dress like she’s in a stylish Italian movie.

Margaret, on the other hand, looks prim and uptight and ten years older than her age. It’s kind of amazing how the characters are going in completely different directions. We imagine that Margaret finds her mother’s outfit a little too daring.

Margaret has a meltdown over Jane and Mona calls Roger so that the two of them can act like parents for once and shut their hysterical daughter up.

They are in two completely different places now. Margaret originally wore florals to her mother’s matching plaids and then later dressed exactly like her when it looked like they were heading in the same direction. Now that Mona’s a divorcee and Margaret’s a fiancee, their styles are totally at odds with each other. It’s not particularly fair to compare them, because they’re dressed for different reasons, but look at how fussy and uncomfortable Margaret looks (not every woman can pull off those hats) and how at peace (relatively speaking) Mona looks.

Margaret’s wedding, of course. The day after the Kennedy assassination.

Not much to say here, except that Margaret’s dress and veil are very much of the time period. There are pictures of brides wearing that head dress in a million family albums.

Mona looks cool and collected and pretty. Her hair is soft, she’s got a little more makeup on, and her jewelry is still noticeable but a little understated. For her, it was all about getting her daughter to this day and looking good compared to her ex-husband’s much younger and very drunk wife.

We’ll get to that much younger wife in Part 2.