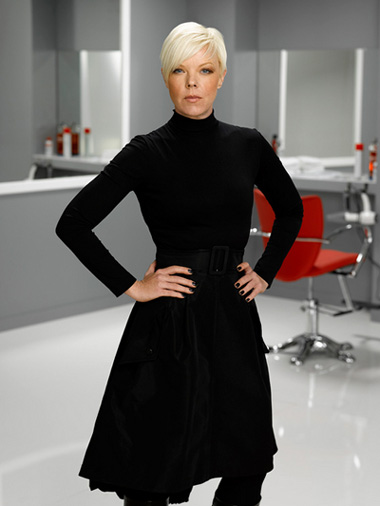 Darlings, our favorite hair witch is back tonight on Bravo with the premiere of the second season of Tabatha’s Salon Takeover at 10/9c. We never need an excuse to chat with her, but we figured now would be a good time. She’s so incredibly sweet you wouldn’t believe it. Seriously. As long as you’re not a hairstylist or salon owner doing a shitty job, she’s one of the nicest people you could meet.

Are you excited about the new season?
I’m really excited. It’s really good.

What’s the most appalling thing you see at the salons?
Well we all know how I feel about dirt. I see that all the time and it drives me crazy. ANd I think I went into the filthiest salon I’ve ever seen in my life.

What areas are you guys covering this season?
We did three in Chicago, three in Florida and the rest are here in LA.

What are you doing in LA, by the way?
I’m here for the premiere. There’s a premiere party that Outfest is sponsoring tonight.

That’s exciting. How does it feel to go from being a contestant on Shear Genius to having your own show and heading to a second season?
It’s fantastic. You know, what? I couldn’t do it without everyone, like you guys, talking about it and everyone watching it. I’m really blessed. I can’t tell you how amazing it’s been, and how much fun it is to go in and do a takeover, so it’s great.

Well, helping professionals and salons is nothing new for you. You’ve been traveling the world doing this for a long time, right?
It’s nothing new, I’ve owned my own salon for 8 years now. I work for Joico traveling around teaching other hairdressers… I mean, building a business is a huge part of it, whether you work in the salon and you have to build yourself up, build up your name and your reputation,or if you decide to buy a salon or be a salon owner, you need to have all the business skills there and I think that’s one of the things that we see that on the show, people going in half blind and they don’t know what the hell they’re doing and problems ensue

Do you think management is the main problem with those salons?
I think it varies. There are certain situations you’ll see this season that it’s the owner and the manager, but there are also situations where it’s just the staff totally out of control. It’s definitely a trickle-down effect. The management is not taking care of everything properly or the owner just doesn’t care and that’s the message that they’re sending to the staff and the staff is not going to care either.

[Laughs] Do you think it has to do with your strong personality and the fact that you’re a woman?
I think part of it it’s because I’m a woman and no one else knows what to do, except call a strong, assertive woman a bitch, and also the fact that I don’t pull any punches, I tell the truth. I don’t hold the salon’s hand, I don’t have time to it, I really do want to help them and I don’t have time to kind of soften it. I tell them the truth and I try to get results in the shortest amount of time that I can.

How’s your salon in New Jersey?
It’s doing really well. I have a great trained staff and I have great management. It was hard because I was away for a long time and everyone did a really fantastic job of keeping everything going for me. It’s nice to be back and doing clients.

You’re also working on the development of products.
Yes, I’m working on a product line which is something that I’m excited about, working on something to bring out to clients out there.

Any trips planned?
No, unfortunately, this is it for me. This time in LA is my vacation.

You just got back from Australia, right?
Yes, but you know what? Especially now, it’s really hard because of the holiday season and clients want me so I can’t leave.

Speaking of clients, what would you consider a perfect haircut?
It’s the one that suits the person. It’s working with the hair type, the hair texture and the lifestyle and the look of the client so that everything just works together. I don’t think there’ s any one perfect haircut, it depends on the individual.

Well, that’s it, Tabatha. Thank you so much and good luck with the new season.
Thank you! I love you guys!