If last week’s episode was the most cynical in the show’s history, then this week’s may just have been the most depressing. It was all about power dynamics and what happens when people who want what they want when they want it and have the power to make it happen exert that power over people. In true Mad Men fashion, this theme was played on both the personal and political levels. 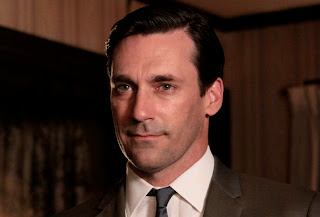 Don is no longer the master of his domain. Tied to Sterling Cooper with the signing of his contract, he’s finding that being at Connie Hilton’s constant beck and call isn’t as gratifying as he thought it would be. We couldn’t help but notice that Don is now showing up for work earlier than anyone else, a complete reversal from the former cocky swagger into the office at whatever time he felt like. On the one hand, Connie and Don share a deep bond, one that goes beyond mere father-son dynamics, although he was clearly deeply affected by Connie saying that he was like more than a son to him. If there’s anything that Don wants more than the illusion of freedom, it’s the respect of a father figure. He’s done a pretty good job of keeping potential father figures like Bert Cooper and Roger Sterling at arm’s length, but Hilton, a self-made man from a background similar to his own, that’s the kind of man whose respect he yearns for, even if he’d never admit it.

Unfortunately, as soon as Connie doled out that respect, he yanked it away. “You didn’t give me what I wanted.” Connie is pretty much the worst kind of client: demanding, obtuse, and impossible. Don was always able to get by on his charm and superior talent but we’re no 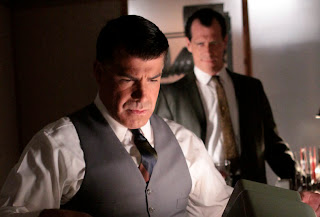 longer looking at the in-control Don. We’re looking at the Don whose control is slipping away and his desperation is palpable. For the first time, we had a scene between Roger and Don where Roger was the one with all the power. That never would have happened prior to Don signing that contract.

So desperate is he to run away from his problems that he does something the old in-control Don would never have done. He begins an affair with Suzanne that’s dangerously close to home. Because she’s done this before, she’s wary (or at least feels the need to seem wary) but he, awash in fatalism, simply doesn’t care. He wants what he wants when he wants it. Think about it: as he’s sleeping in her bed, his car is parked outside, two miles from his house. That’s just asking to be found out in a community small enough (and rigid enough) for Betty to be concerned that someone might see a man enter her house in the middle of the day. 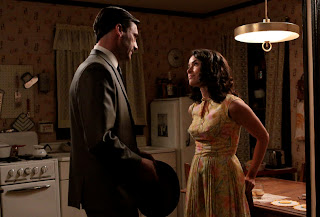 What Betty wants right now is Henry. Fortunately for her, Henry wants her just as much. Unfortunately for him, he’s dealing with a child-woman whose idea of an affair is positively Victorian; all fainting couches and love letters, but no sex. It’s weird, but we can’t shake the feeling that what Betty and Henry are feeling for each other goes beyond lust. We rarely ever think this about the various extramarital affairs on this show, but it feels like they really might be in love with each other and more importantly, should be together. Maybe that’s just because she’s so miserable in her current situation and Don’s simply not the man who can meet her needs emotionally. The only other couple who gave off that vibe was Pete and Peggy and we all know how that turned out.

It may be a moot point, because Betty put the kibosh on taking their little Victorian romance to its natural conclusion. Sex with him is too “tawdry” in her mind, another factor that makes us think these two might have more going on than a lust for each other. Henry fairly worships her and Betty’s the kind of women who desperately needs that. “I don’t know what you want,” Henry pleads with her, to which we can only add “Get in line, buddy.” It’s interesting to note that this is one time where Betty really does have all the power. Henry won’t go to her because she’s married (another bit of Victorian “morality), so she has to be the one to come to him. 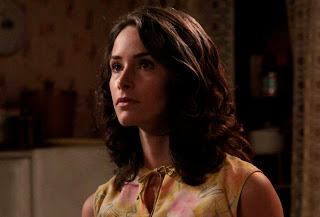 Actually, there is one other area where Betty has the power. “Carla works for me, not for you,” she reminds Bobby. Apparently, in Betty’s mind, part of Carla’s job description entails dragging her in as an alibi while she contemplates an affair. As the show has shown in quiet ways time and time again, Carla’s no fool. She read that scene in a second even though there was virtually nothing for her to pick up on.

It can’t be easy for an African-American actress to be playing a pre-civil rights maid in 2009, but her performance is so quiet, intelligent, and full of dignity that she really pulls it off, even though she probably got no more than a dozen lines the entire season. Finally, civil rights is moving from the background to the foreground, as we get the one-two punch of the march on Washington and the Birmingham church bombings in the same episode. “Segregation is uncivilized,” sniffs one of the Junior League ladies as Carla answers the door and takes the coats in the background. For these typical northeasterners of the time, racism only occurs elsewhere. They can’t even imagine it in their own communities, even as it plays out right in front of them. 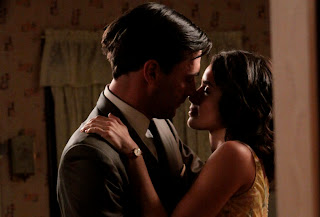 “Maybe it’s not supposed to happen right now,” says Betty to Carla and we are treated to one of those golden moments where the show masterfully comments on the modern world by delving into the world of a half-century ago. It may not have registered with every viewer, but believe us, the gay ones got it because that is exactly what well-meaning supporters have been saying to us for a decade now regarding our own civil rights struggles. Be patient. Don’t ask for too much equality because it might piss people off. It’s no more an acceptable argument for denying civil rights today than it was in 1963, and with the Sal storyline, we simply don’t believe that this was merely a coincidence or that we’re reading too much into it.

As for poor Sal, Lee Garner, Jr. wanted what he wanted when he wanted it and unfortunately, Sal didn’t want it – at least not there and then. Lee knew that he was the one with all the power (he forced Pete to smoke when he didn’t want to and called Harry to handle the situation because he knew he was a pushover) and in classic sexual harassment fashion, when he doesn’t get what he wants, he punishes.

Of all the ways Sal’s storyline could have played out, we never would have predicted that this would happen. A tip of our hats once again to Bryan Batt, who played his scenes beautifully. His sadness was overwhelming and we were devastated watching his fall from grace. 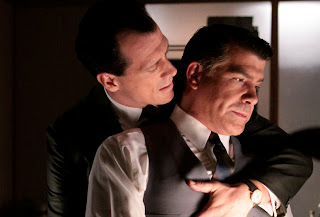 Another tip of our hats to the writers for not being afraid to show just how much of a bastard Don really is. “You people,” he says with disgust. Apparently, his advice to Sal to “Limit your exposure” meant that not even Don wanted to be confronted with his disgusting sexuality.

We doubt very much it will play out this way but more than ever, we want to see the world of Mad Men open itself up and show the Madison Avenue outside Sterling Cooper’s doors. We have no idea what’s going to happen to Sal now (it will kill us if he’s gone for good), but we fervently wish there was some other agency where Sal, Joan, and Peggy could all go just so they can realize their potential and give a big old fashioned “Fuck you” to the swaggering Don Drapers of the world.