This was easily the tightest episode so far. For the first time, they managed to combine plot, humor and musical numbers. In previous episodes the best we could 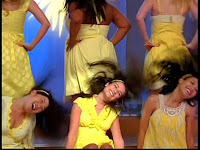 expect was 2 out of 3. While the numbers, a mashup of “Halo” and “Walkin’ on Sunshine” from the girls and a mashup of “It’s My Life” and “Confessions” from the boys, weren’t as over the top as some we’ve seen, they were still entertaining as hell. They can’t do “Don’t Stop Believin'” or “Somebody to Love” every week, after all.

The key is to make sure that Sue Sylvester is prominent in every episode and this week, they once again gave all the best lines to her. Let’s run them down, shall we? First, she said what all of us want to say when we’re stuck listening to something we don’t want to:
“Oh, dear God, please. Stop talking. I’m trying desperately to ignore the treacly sweet inanity of your asinine conversation but now I’ve got bile in my mouth.” 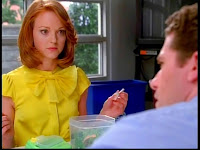 We are SO going to find a way to use that. Then there were her interesting ideas about how to treat students:
“We’re dealing with children. They need to be terrified. It’s like mother’s milk to them. Their bones won’t grow properly.”

And her descriptions of the glee club: 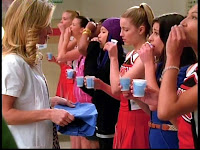 A “clutch of scab-eating mouth-breathers,” and a “cabal of doughy, misshapen teens.”

Say what you will about her, the lady knows her way around a sentence. Nothing tops her dead-on description of Emma, though:
“A mentally ill ginger pygmy with eyes like a bush baby.”

When Sue wasn’t chewing the scenery, we got some movement on the Terri/Quinn’s baby scenario and we have to say, it gets more implausible with each episode. How exactly are both of them planning on making the switch without anyone knowing? Yes, yes, we realize that with a show like this you have to suspend your disbelief quite a bit, but since they’re already asking us to do that with the musical numbers it wouldn’t hurt to make the plotlines at least slightly plausible. 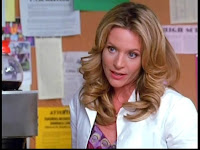 We feel a bit bad for the actress playing Terri, because she’s actually quite good in the role, but she’s saddled with a character who’s awful and whose actions make no sense. The whole Emma/Will unrequited-love thing would have a lot more tension if EVERYONE watching the show didn’t hate Will’s wife.

So Terri takes a job as the school nurse to be closer to Will even though she’s not a nurse (don’t think about it too much) and promptly gets to dosing the drowsy kids with pseudoephedrine, which results in two very manic numbers, one from the boys and one from the girls.

A couple things here: the songs and performances are, as always, what make the show. But we’d like to see one of the other girls take the lead, especially Tina or Mercedes. Yes, they’ve made the hard-to-argue point that Rachel is the most talented and most driven, and we’re certainly not complaining about her performance here. It’s just that it would be nice to hear someone else 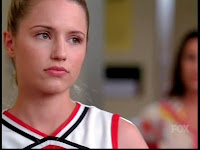 take lead for once. They managed to do it with the boys. Finn got a solo but then they handed the mike over to Artie (wheelchair kid) and he’s got a GREAT voice. More of that, please. We also liked that these two numbers weren’t TOO polished and that for once, they really did look like homemade or thrown-together costumes. Emma never picked a winner, so which team do you think did a better job?

Let’s see, what else? Well, we got to see an old lady get tripped on 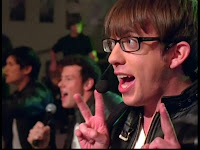 the stairs and wind up in a coma. That’s always good for comedy. “They declined my offer to do their hair in cornrows.” There was a sweet scene between Rachel and Quinn. For all the plot implausibilities of this show (which, for the most part don’t bother us as much as we make it sound), we have to say the writers have done a pretty good job of making us believe that the popular kids and the dorks really can and do start to like one another a little bit. It doesn’t seem weird to see Kurt with Puck or seeing the cheerleaders enjoy the hell out of themselves singing backup to Rachel.