We knew that already but it was still shocking to see it spelled out, both in Jimmy Barrett’s confrontation and in the literal trail of garbage the Draper family leaves behind after enjoying an afternoon out. The message couldn’t be more clear: they and their surroundings may look perfect and idyllic, but the whole thing’s a mess, really. 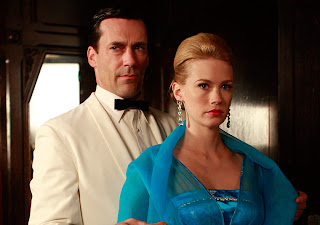 We get another glimpse of Don’s immediate post-Dick Whitman period via a flashback to his days as a car salesman in the early ’50s. Jon Hamm does a terrific job of differentiating between the “Don Draper” of ten years ago and the fully realized Don Draper of now. We wondered how he could have just taken over another man’s life without complications and now we see he didn’t. We’re dying to know how he made those complications go away.

That humble, almost-grimy flashback is in sharp contrast to the tableau of picture-perfect Don admiring a Cadillac Coupe de Ville in a spectacular 1962 showroom. As Don admired the sleek lines of the car, the clearly gay salesman was admiring Don’s. The sudden remembrance of the lie his life is built on (as if he needed any reminding) causes him to reject the status car because he can’t quite embrace the idea that he deserves it.

As if he could do anything to stop his upward mobility. Duck screws things up with the American Airlines pitch and Don winds up getting the major status leap by being asked to sit on the board of a new museum. “Philanthropy is the gateway to power,” says Bert Cooper, the Rand disciple, and the cynicism of the remark isn’t lost on Don. He may be slightly reluctant to “take his place at the table,” but clearly it didn’t take him long to change his mind. “Wayne, I would like to buy this car,” and he proceeds to treat it with the reverence he would never accord his own family. No fooling around in the car with Betty and no Silly Putty in the car. And check those kids’ hands before they get in the car. Leave a literal trail of garbage behind you, but make sure your prize possession is in perfect condition.

In other news, We finally get to see a little more of the Sal and Kitty Romano home life and honeys, speaking as a couple of gays, it is depressing. Oh, the surface (like all surfaces in the world of Mad Men) is pretty and looks perfectly coordinated – Sal and Kitty’s outfits matched not only each other’s, but the decor as well – but obviously (to us, anyway), the whole thing is built on a lie.

We literally groaned out loud at poor Sal’s sudden crush on the newly revealed “sensitive” Ken Cosgrove, who understands a Rothko painting, makes a West Side Story reference (that causes Sal’s neck to snap up so quickly, we thought he was going to launch into “America” right th 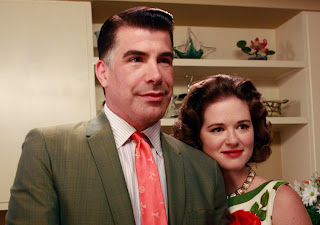 en and there), and sheepishly asks Sal to critique his latest story. Sal’s infatuated, Ken’s oblivious to it, and Kitty knows something’s a little weird but she probably can’t figure out what. That is NOT a good combination.

It would be easy to judge Sal or to root for him to get out and wave his rainblow flag but the fact is, in 1962 in that milieu, Sal didn’t have a lot of options and the options he did have were damn scary. Kudos to Bryan Batt for his performance this week. We rarely say this sort of thing regarding gay roles or gay actors, but only a gay actor could have managed the thousand different expressions that flitted across his face this episode. Only a gay man could nail that fear and that repression.

In other news…there’s a catfight in the Sterling Cooper steno pool, bitches! Joan has HAD IT with Jane from Jane Street and the sight of the formidable Miss Holloway marching across the office (while still managing a sashay) and demanding of Jane “What in God’s green earth are you doing here?” after having fired her for pointing out that Joan’s 11 years older than her. Is there anything more frightening – and more delicious – than the simmering Joan saying perfectly evenly to the girl who won this round, “No. There’s no problem. It’s perfectly clear.” Oh Jane, honey. You are in for a shitload of trouble 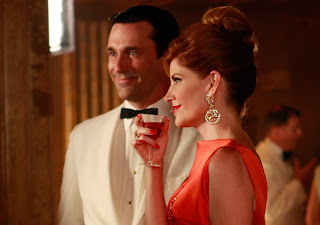 now. Roger Sterling’s no fool. He’s got two gorgeous women locking horns and he’s managed to position himself in the middle. Make no mistake, that whole conflict is going to about Roger Sterling any minute. We thought it was notable that Joan was wearing the same dress in that scene that she wore in the hotel room scene with Roger last season. That kind of thing isn’t accidental on this show.

We also saw the return of Mr. Smith and Mr. Smith, who just wanna be, man. Not-American Mr. Smith is kinda cute. Still, despite their assertions that their generation is so different from the preceding one, they still manage to write jingles about “coffee-colored girls” down in Mexico and they still manage to call Peggy “sweetheart” in front of her peers. They’re not as different as they think.

And finally, that devastating final scene in the Stork Club, where Jimmy got back at Don for fucking his wife by fucking over Don’s wife in return. Betty looked absolutely destroyed by Jimmy’s words and again, we have to give props to January Jones for being a much better actress than she is given credit for. Jimmy sat down and with a smile on his face, tore her life apart. It says a lot about perfect little Betty Draper that the first thing she does is respond with what sounded to us like an anti-Semitic “You people” in return. But can you really blame 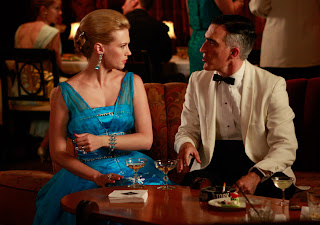 Jimmy? Sure, what he said to Don and Betty was nasty and meant to hurt, but at least he’s honest about his feelings. You can’t say that about most people in the world.

So perfect Don and perfect Betty drive home in their perfect car in perfect clothes in perfect silence. Until Betty pukes all over her perfect dress and Don’s perfect car. That ending? Perfect.