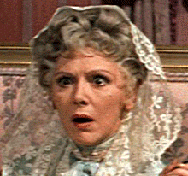 Yes girls, it’s Gigi! The story of a young French girl who finds love despite her grandmother’s sick attempts to train her for a life of prostitution!

The year? 1900! The place? Paris! The Bois de Boulogne! The players? Perverted old Frenchmen and snotty high-priced whores in vagina hats! And oh honeys, this film is the holy grail of vagina hattery.

We start with Maurice Chevalier as Honore, a disgusting old Frenchman who sings about how he’s hot for little girls.

Finding 5-year-olds a little too small for his tastes, he moves on to the pubescent girls in the crowd and we are introduced to the beautiful Leslie Caron as Gigi. She wisely runs far away from Maurice.

And into the arms of her Grandmother, the divine Hermione Gingold. Hermione berates her for being late for her “lessons” with her Aunt Alicia. She runs a comb through her hair and shoves her out the door.

Meanwhile, Maurice picks up his nephew, Louis Jourdan, for a carriage ride. Louis sighs and sings about how bored he is with the life of an outrageously wealthy playboy while Maurice fondles himself looking at all the young girls on the streets.

Meanwhile, Gigi is with her fabulous Aunt Alicia, an aging, imperious former courtesan to wealthy men and minor royalty. Aunt Alicia is teaching Gigi the important things in life, like how to pour coffee, choose a cigar, and turn down presents of cheap jewelry in order to hold out for the big rocks. Because this is a film from 1958, the oral sex lessons take place off-camera.

After her lessons, Gigi runs into Louis. They tease and banter, but he clearly thinks of her as a child and she thinks of him as a rich uncle.Honestly, all the relationships in this movie are weird. We think the only reason a movie like this was made in 1958 was because, unlike the vast majority of classic musicals, it was not about American life and culture at all. It could all be attributed to the French and their strange Gallic ways.

Later, we are introduced to Louis’ latest whore, Eva Gabor. We laugh and clap as she struggles her way through her lines. The woman couldn’t emote if her life depended on it. We suspect poor Vincente Minnelli spent most of the time directing her scenes reminding her not to look directly into the camera. She’s that bad.

Later, she fastens a tutu to her head and sluts it up in public. Louis suspects he’s not the only name on her dance card.

Louis is correct. Although kudos to her for her fine taste because he’s the only hot man in the movie.He dumps her, she attempts to kill herself, and everyone laughs and makes jokes about it. Seriously.

Champagne and vagina hats for everyone! Louis throws himself back into high society in an attempt to get over his ennui. Frankly, he’s just a moody, self-absorbed frog.

He much prefers the simple life. Shucking beans with poor underage girls…

And whisking them off to resorts to frolic in scandalous attire.

Aunt Alicia is simply BESIDE HERSELF over this turn of events. She ties up her head, calls over her sister, and yells at her for letting her granddaughter frolic with a rich man WITHOUT getting paid for it. Mon dieu! Le scandale! Aunt Alicia’s in charge now, bitches and if her grandniece is running off to the beach with the richest man in France, then it’s time to step up her whore lessons, toute fucking suite!

First stop: The couturiers of Paris:

or le tablecloth? Which shall it be for our little baby whore?

None of them, apparently. What does Aunt Alicia choose for her young charge?

A wedding gown. Way to send the mixed signals there, Alicia. Why not dress her in a nun’s habit? Louis is NOT amused.

He calls in poor Hermione who sadly spends most of this film moving lamps from room to room and getting berated by other characters. He wants his little moppet back in her schoolgirl clothes immediately. Hermione stands firm and tells Louis that Gigi is a woman now and if he wants to spend time with her, he’s going to have to pay for it like everyone else.

The next day, Hermione runs to her sister to give her the news: Louis has agreed to “sponsor” Gigi by setting up an apartment for her and lavishing her with gifts.

We never actually thought about it before, but now we DESPERATELY want a lace-covered bathtub.

That night, Louis stops by to give her the happy news. How do you say “You’re my bitch now” in French?

Gigi, unsurprisingly, is not at all happy with the arrangement and turns him down flatly.

Louis beats Hermione with his walking stick for trying to set him up with such a little cocktease and storms out.

Aunt Alicia does not take the news well.

Louis goes back to the apartment to beat up the old lady some more when Gigi decides that she’s changed her mind.

And suddenly, she ages 5 years. Although to be fair, that gown is fucking GORGEOUS. Anyway, Louis takes her out to Maxim’s for their first big night on the town.

And ends it abruptly and without any explanation whatsoever by throwing the weeping Gigi into her grandmother’s arms. This guy’s an asshole.

He spends a little time moodily wandering the streets of Paris, backlit. We keep hoping that bands of thieves will come upon him and beat him to death, but no such luck.

Instead he wanders back to the apartment and out of left field, asks Hermione for Gigi’s hand in marriage. Y’know, if it were us, we would’ve said “Fuck off, you moody frog!” but then again, he’s really rich.

Anyway, the movie ends with Gigi wearing the vagina hat to end all vagina hats, which apparently means that her vagina is no longer open for business. The end.