Drag Race, you’re killing us over here. Not content to flood the culture with non-stop franchisee seasons airing continuously for nearly two straight (you’ll pardon the term) years, y’all had to go drop the first two episodes of All-Stars season 6 at like 3 in the morning yesterday. Not only that, those two episodes were packed to the rafters with so much material to assess – from a full-on talent show to a 36-look ball – that all these two weary recappers could say after we finished watching was “You’ve got to be fucking kidding me.” Not that we mind a talent-packed or looks-heavy episode of Drag Race. Given the collective response to this season’s roster (a cruel if slightly on-point “They’re scraping the bottom of the barrel”), perhaps the show’s producers realized upfront that the queens needed to immediately make the case for themselves and gave them every chance to do so. Perhaps we’re feeling that first-few-episodes glow of optimism, but we think most of the queens defended their All-Star status fairly well. Still, there’s no denying the sense that the cast is mostly made up of queens who have had plenty of chances at a crown or queens who didn’t quite establish themselves as All-Star material in their own seasons. Which means that right off the bat, there feels like a massive talent gap between the over-exposed queens and the under-proven ones. In other words, you put Ginger Minj in a reading challenge against people like Serena Cha Cha or Trinity K. Bonet or even Kylie Sonique, and it starts feeling like the season’s going to be a bloodbath. Even so, the talent show was appropriately packed with talent and those queens who couldn’t belt out a tune found ways around their shortcomings. Most of them, anyway. Jan is back, extremely self-aware, still packed to the gills with talent, and ready to prove herself. In many ways, she’s the perfect All-Star. And while we think she’s likely to stay in the competition for a good while, we wonder if Ru’s going to continue to be under-impressed by her. Pandora did very well for herself and she should be fairly pleased with Ru’s response to it. Her costumes (like most of the All-Stars) have taken a step up, but her makeup is looking incredibly harsh. We hope she’s able to treat this like a chance to have fun and give her career another boost because it seems like she got her feelings hurt by the competition a few times in the past. Jiggly Caliente has come back to Drag Race an entirely new person – and we’re not talking about her transition. Not directly, anyway. We don’t think we can recall any queen coming back to the show having matured and grown as much as she has. She’s a walking advertisement for living your truth. She seems so much more open about herself and engaged with the world. It really was a great thing to see. Her number was cute. Also great to see Sonique back, fully herself and full of a confidence she didn’t have during her first go-round in the competition. The number was cute but we suspect her showgirl style of drag is going to feel limited if she’s not able to pull something truly sickening out of her costume trunks soon. This was a really bold thing for Ra’Jah to attempt, but she managed to pull it off with charm and style. She’s one who may be leaning a bit too hard on “I need to prove myself and change my image.” That kind of agenda has tripped more than a few queens up in the past. A’keria seems to have a pretty healthy attitude; somewhere on the halfway point between “I’m here to have fun and be sickening” and “I’m here to prove my worth to the world.” Her number, like almost all of the musical numbers except Silky’s, felt very over-mixed and rehearsed from well before she stepped onto that stage. 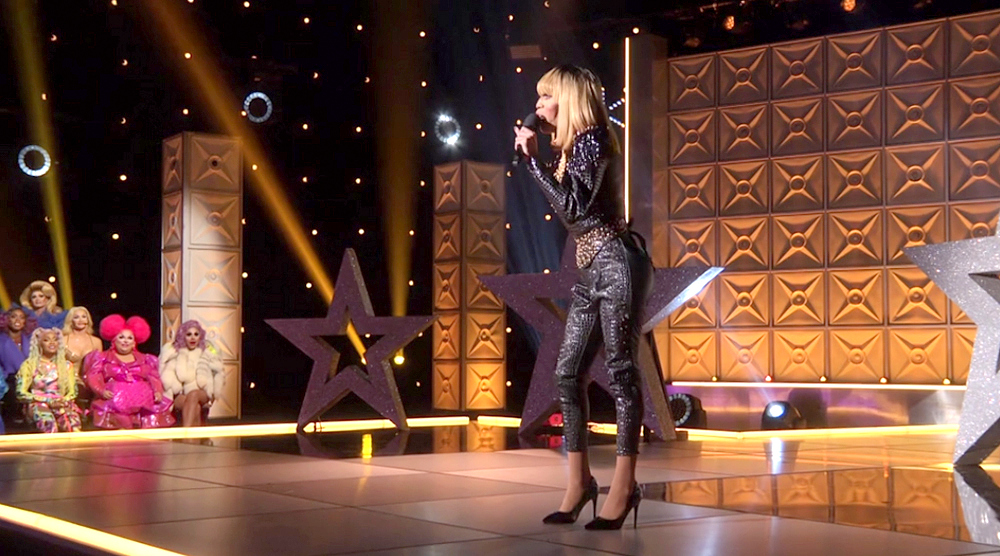 Poor Trinity. The only thing we heard through her entire poorly conceived and horribly delivered set was “I’m still not ready for it.” This felt like a naked play to maudlin sentiment. It felt calculated in a way that made the performance a little dull, but we admired the beauty-pageant audacity of it. Sometimes we’re a little puzzled by what feels like a collective shrug whenever Scarlett does anything. We think she’s a world-class queen with real charm and sickening looks. And we love when queens bring some sort of cutesy burlesque-style talent to the stage rather than belting out a prepared song like they’re on The Voice. Silky has returned to the competition a quieter person, seemingly chastened by some of the backlash she received during her time on the show. She seems determined to do an image correction but her performance here, while lovely, was underwhelming. We hope she hasn’t completely tamped down on any of her natural charisma or uniqueness. Serena’s song about wigs was cute, but her performance was nervous and frenetic. Her costume was kind of ugly too. She came back wearing her heart on her sleeve; desperate for a chance to prove that she’s an improved queen. It tripped her up. Ginger’s performance was – as expected – flawlessly delivered. And right on schedule, she announced this morning that her new single “Gummy Bear” has dropped if you want to go and download it. The whole show is a career showcase and those queens who are smart about it will likely do much better than those queens who seem to be basing a bit too much of their self-worth on how well they do this time around. We figure Ru must have been pretty bored by all of those over-produced songs and/or he wanted to send a message to the queens by giving Yara the win for her frankly kind of ridiculous titty number. There’s no reasonable way to see it as a superior effort to some of the musical numbers, but we think Ru would rather reward a crazy queen with no boundaries or fear than a nervous but talented theater queen desperate to prove her worth. Coco Montrese showed up for the lip sync and pretty much wiped the floor with Yara, sending poor Serena home. The second episode was a ball challenge with a final DIY unconventional materials look to go alongside the two costumes the queens all brought with them for this very challenge. Just a press-pause here for a second to reflect on how great it is to not only see trans contestants (plural) in a season of Drag Race, but to have them both come back as their true selves after suffering through the competition once before while still dealing with their identities. Ru got himself in quite a bit of hot water several years back when he more or less declared that Drag Race was only interested in cis male drag and that trans queens would have too much of an advantage in the competition. Ru’s not dumb or ignorant about the history of trans drag performers. One of his oldest friends is Candis Cayne. His sort of thinking on trans contestants comes from a very pageanty sort of idea of drag, not to mention an old-school queen’s thinking that drag is primarily (or only) about gender illusion techniques, i.e., a cis man giving the illusion, through padding, tucking, makeup and performance, that he is a cis woman). When you look at old episodes of the show, from back in the days when it was airing on Logo between HIV med, lube, and leather gear commercials, you routinely heard the judges criticize a queen for “serving me boy in a dress” or other such comments that indicated that gender illusion was a primary criteria for succeeding on Drag Race. Like the rest of the culture, Drag Race went on a bit of a journey on the idea of trans and nonbinary acceptance and understanding in the last decade. We can’t claim to know what Ru’s thoughts are on the matter, but if he is begrudging in his acceptance of queens like Sonique and Jiggly on the show, he’s doing an Oscar-winning performance indicating otherwise. 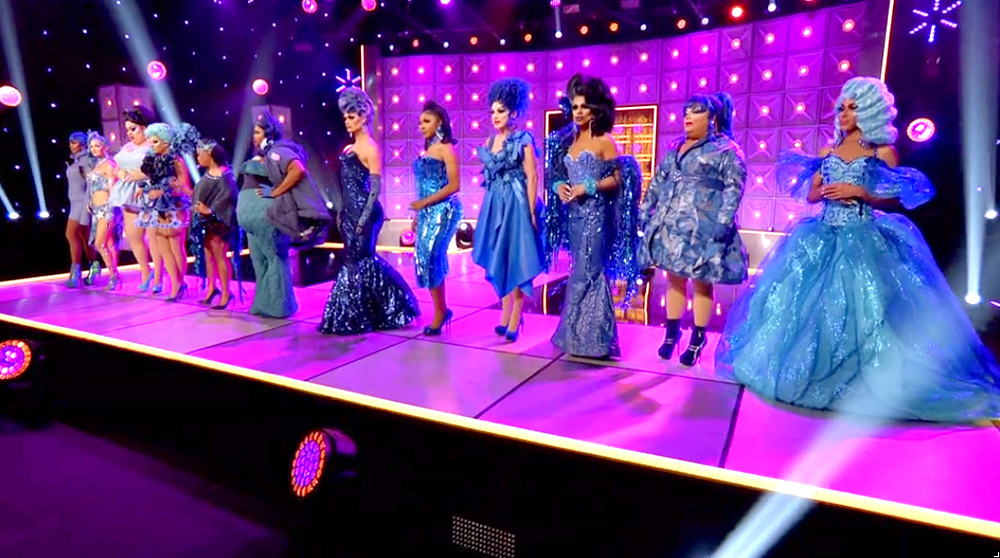 Anyway, the queens all served 3 looks a piece and there’s no way we’re screencapping and assessing all 36 of them. Ra’Jah’s, Eureka’s, Jan’s, Scarlett’s, A’Keria’s and Trinity’s all stood above the other efforts. Sonique, as we said, is defaulting to a showgirl style that Ru’s going to get bored with rather quickly. Jiggly’s was a blanket – and it looked like it. Silky’s was kind of a mess, although the construction was fairly impressive. Pandora’s was dowdy and underwhelming. Yara’s was actually kind of great. We have to assume she wound up in the bottom because of her other two looks, one of which relied on that massive boob plate again. Ginger’s is good, but not as good as some of the others. Ra’Jah got a well-deserved win for turning out a look that felt high-fashion. Between that and tying with lip sync assassin Brooke Lynn Hites (in the first truly epic lip sync in what feels like YEARS), we’re hoping Ra’Jah’s slightly feverish need to prove herself has abated. We really couldn’t argue with this. Yara was pissed she wound up on the bottom and she had every reason to be. It looks like most of the queens agreed with her on that. It was a shame to see her go when she came back so triumphantly herself, but if her goal was to come back to Drag Race to show the world how much happier, fulfilled, and all-around better she is now that she’s living her truth as a woman, she should be proud of what she accomplished.