Well, it turns out this film isn’t doing so well and Miss Elizabeth has been somewhat vocal in her response to the box office reports. Far be it for us to reduce a whole bunch of factors down to something so simplistic, but we DID warn all y’all that your promo style plan didn’t feel very unified or well-planned. We’re just saying. A good red carpet game plan for a franchise like Charlie’s Angels just seems like a no-brainer to us. We’re not saying that you can predict a film’s success based on how well the cast does in dressing to promote it, but we’re not not-saying it either. If you know what we mean. Sometimes, you can get a sense of how excited the principles are about the project – or more accurately (and cynically) how hard they’re working to make it seem like they’re excited – based on how they approach their promo style choices. Generally speaking, a cast of all or mostly women would do well to have a coordinated game plan so that they each step out looking distinct but also like part of an ensemble. It’s almost like having a pick-your-own dress bridal party. Think of the Sex and the City or Ocean’s 8 casts and how well they did at selling themselves and the film while looking like the absolute best of friends and colleagues. You don’t have to match. In fact, the four outfits here are all really well matched. You have to be distinct, coordinated, and almost iconic in your approach. Or at least, you should consider being so, if you want to do everything you can to ensure success. Miss Elizabeth chose a pretty sexy path for this one. This is not the first belly-baring gown she’s worn. Far be it for us to suggest that the oldest cast member and the film’s director needs to dress demurely, but if we’d been consulted, we’d have had her out there in a string of sexy-glam disco-ready suits, Lauren Hutton-style. We also would’ve advised K Stew to lean hard into her rocker chic preferences. No gowns for this gal. Not on this tour. Lots of leather, tons of slap, and heavy jewelry. To be fair, she wore a leather jacket for part of these shots, but we still wouldn’t have put her in a such a classic style of gown. 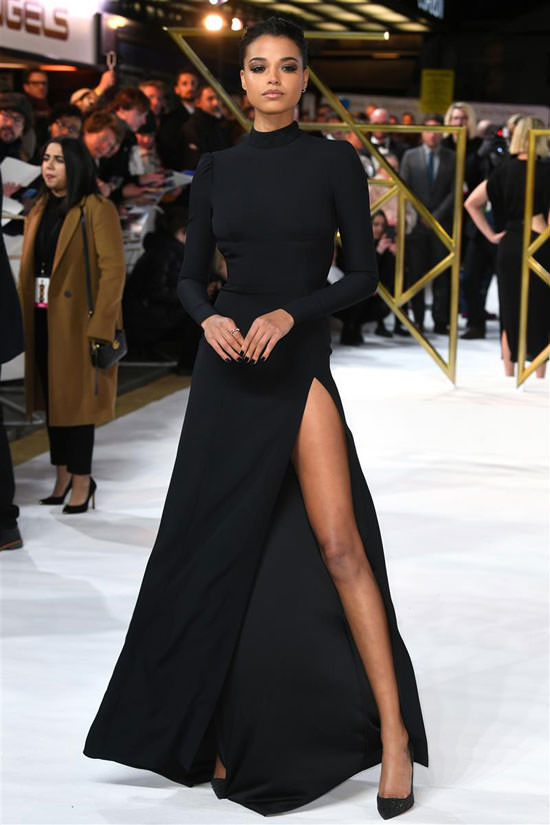 Admittedly, this is exactly the way for her to go. We find the dress a little boring, but it’s a testament to her rightness for it that she’s making it look so dramatic. Sweeping, minimalist gowns sound like a great idea to us. Just throw in some color now and then. We don’t hate this outfit. In fact, we’re impressed she chose something so out-there. But for a Charlie’s Angels tour, you don’t wear the edgy fashion. We do think she’s right to lean toward florals as a way to stick out, but we’d probably have steered her toward more of the floaty retro florals (if not a prairie dress or two) during this tour. Having said all that, they don’t look terrible. And this is probably the most well-coordinated they’ve looked throughout this tour. But doing what we’ve been doing for the last decade-plus, it’s hard for us not to see a connection between the film’s rather bland visual style and the unfocused promotional style of the cast.

Previous post:
The Crown: “Aberfan” and “Bubbikins” Next Post:
Alicia Keys in Zimmermann at “CBS This Morning”