We don’t want to get into this too much because we feel bad saying it, but LOGO tends to disappoint us as the only real attempt at gay-specific cable marketing and programming. It’s frustrating, because you can see how the channel could be so much more than it is. And we feel like the solution is right in front of them. Just hand over everything to the producers of this show, because they routinely toss out random ideas for gay-friendly TV programs we’d watch in a HOT SECOND.

WHO THE HELL WOULDN’T WATCH HUNG MAN OR THE SNATCH GAME EVERY SINGLE NIGHT OF THE WEEK?

Right? It’s not just us? 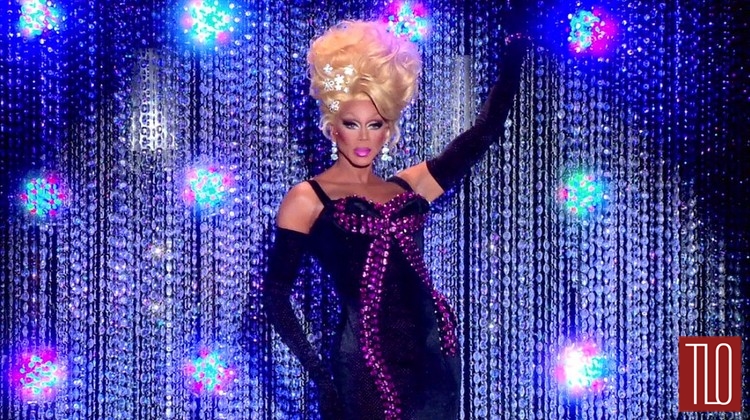 How is it this woman is in her eighties?

Having seen Chaz grow up in the spotlight, we can say we’ve never seen him as comfortable and at ease as he is now. Prior to his coming out as transgender, he was clearly someone uncomfortable in his own skin. It’s why he makes such a good spokesperson, because anyone over a certain age can remember how hard he had it for a really long time. We really never get a chance to say something like this about the judges on this show (except for Ru), but we kinda love her top. In fact, we were a little distracted by it.

She was also more lucid than we would have figured.

The talk show challenge is always among the most awkward of any season. Let’s just cringe our way through it. Oh god. Painful. This is exactly the wrong kind of challenge for her because she can’t wing it on charm. She has to engage people and she gets all kinds of weird and nervous and in her own head. It really didn’t help that she wore the absolute worst look she’s ever sported on the catwalk. The only thing we’ll say in praise of her was her ready acceptance that she fucked it up this week. No equivocating. She’s a queen who owns her shit. This was shocking to us, although we suppose the main issue came down to pacing on her part. She never asked Georgia once question, but she seemed to think she had more time. Either way, she was disappointingly awkward when we would have figured she’d be right on top of things. Loved the catwalk look, but the shape of this dress makes her look awfully bottom heavy. We’ve noticed that in more than one of her looks and we’re kind of surprised someone like Michelle or Santino hasn’t called her out for it by now. Sorry to keep using this word but… awkward. And unmemorable, because we can’t think of one other thing to say about it. The dress is kind of ingenious in that it’s an elephant’s face but it’s not obvious about it. The problem is, it’s not at all a flattering dress for her and it looks kind of cheap. Still, it’s nice to see her in something other than a sequined cocktail dress. Honestly? We thought she was sweet but came off pretty nervous. We felt like the judges overpraised her a bit; probably because there was one other queen who was so far ahead of everyone else, they didn’t want to seem like they were playing favorites. Credit where it’s due: this was a really creative look and she sold the hell out of it. Respect. We would have pegged her for coming out in a middle aged cat-lady outfit. Aw, we kind of feel bad for Joslyn. Yes, the abortion question was hilariously wrong, as was the whole focus on vaginas, but she was so genuinely appalled to hear she stepped over a line. She’s definitely got “sashay” written all over her at this point, but we love how hard she’s trying. But Jesus take the wheel, her catwalk getups keep getting worse. If she doesn’t turn this shit out next week, she’s going home. No way are the judges going to stand for another mediocre to bad runway look. To be honest, we didn’t like Courtney’s talk show look… 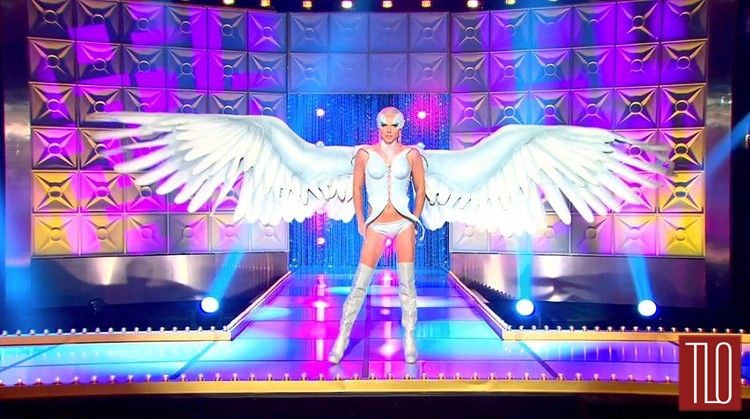 … and we didn’t like her makeup in this look. But we’re nitpicking, because both her talk show performance and her catwalk look were stellar this week; far and away the clear winner. Times like these are when her brief brush with stardom come in handy. She’s probably been on enough talk shows to know how to fake her way through the scenario. Having said that, we wouldn’t complain if Logo added The Courtney Act Show to their lineup, along with Hung Man and Snatch Game. See? A whole block of cheap programming. You do enough of that, Logo, and we won’t have to suffer through so many painfully earnest HIV med commercials.

Yes, that was shady as hell. She looked great, but she was exactly as awful as anyone with a central nervous system could have predicted. 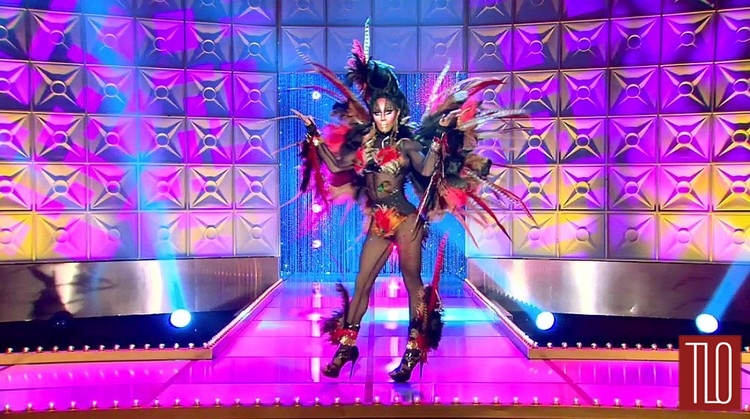 But she had one of the best looks on the catwalk, we’ll give her that. When it was announced that she and Adore would be facing off for the lip synch, no one in the room, not least Trinity herself, really believed Trinity had a shot. There’s a story being told about Adore and Ru’s clearly not done with her yet. It’s a bit of a shame, because Trinity did give the better lip synch, but she’s always going to give the better lip synch. It’s the one thing she does better than anybody there and it’s kept her in the game this long. Her story here is done. She’s leaving proud of herself and with tighter focus on her career and her abilities. It’s a win for her and she left with her head high. That’s the way to do it.