Well, any fears we had that the show was going to lose us by turning out to be yet another cliched crime procedural pretty much evaporated last night. 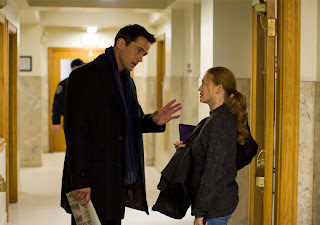 And the funny thing is, we can’t tell you why. In thinking about this episode this morning, we realized that nothing really differentiates it from, say, a Law & Order or CSI franchise, at least on the surface. It’s all there and we’ve seen it all before: the grieving parents, the odd couple cops, the obnoxious and suspicious teenagers (including the bratty rich kid and the druggie runaway), the concerned teacher, the local politician putting pressure on the detectives; there’s not one element to this story that we haven’t seen in dozens, if not hundreds of other shows. So why does each episode stick to us like a mental barnacle for days after? Why can we not stop thinking about this show? Why do we go a little slack-jawed while watching it, totally sucked into and immersed in the world and the characters?

No, scratch that: Mood and acting. Which isn’t to say other crime shows haven’t had great acting and effective moodiness to them, but there’s some combination of factors we can’t put our fingers on that really make this show different for us. In fact, it may be a mystery more enduring and engaging than the actual murder mystery: how the hell did this show manage to get its claws into us so fast?

From a story perspective, we got some very interesting developments last night but, given how much story there is left to tell, we doubt very much that things are as they seem. Sure, those two asshole teenagers were filmed down in the cage “raping” “Rosie.” The reason for the scare quotes is because we never saw the face of the girl in the pink wig and if it wasn’t Rosie, then the video was staged by the two assholes and some other girl (possibly the extremely nervous best friend) to make Rosie look bad. Or, those two assholes raped Rosie on the night of her murder. Either way, we doubt very much that either of them killed her. 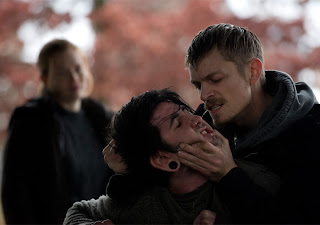 As for the mayoral campaign, there’s no way in hell Betty Draper’s brother (in TV blogging we start using the character’s names right around the time the average viewer learns them, which is somewhere around episode 5) is the mole in the campaign. WAY too easy. Sure, “Someone hacked my email” sounds like a lameass attempt at a defense, but it’s supposed to at this point. He’s a little shit and for all we know he’ll turn out to be the murderer, but we’d be truly shocked if the accusations made against him turn out to be true. The councilman’s girlfriend and campaign manager sure seemed quick to confront him. We think she’s more than a little suspicious on a couple fronts. Yes, they’re having an affair and that would explain their closeness, but there’s something a bit clingy and desperate (with an undercurrent of bitchiness) about the way she engages her boyfriend/boss.

We don’t know what to think of the campaign subplot. On the one hand, it deepens the story of the murder by showing us how the repercussions ripple out, but if that’s the only reason we’re spending so much time on the campaign, that’ll be a little disappointing in the end. For now, we’re assuming that at some point, a real connection between the campaign and murder will surface. What’s the deal with Billy Campbell’s dead wife? How long ago did it happen? It couldn’t have been that long, because the press was very quick to pick up on it and his mournful, weary response to the idea of sending flowers 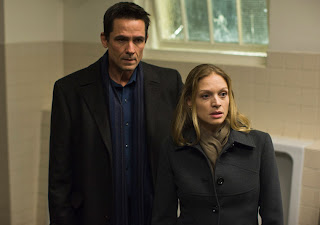 to the Larsen family leads us to think the pain is fairly fresh. Only a person who recently grieved would pick up on how painful it is for the grieving to watch flowers die.

And speaking of grieving, Michelle Forbes as the dead girl’s mother is angling for that Emmy, isn’t she? Based on the three hours shown so far, it seems she’s a shoo-in for a nomination. The bathtub scene was heartbreaking, even as it was predictable. You knew she was going to attempt something and you knew she wasn’t going to be able to do it, making it all that much more painful for her. We wonder if those poor kids will ever eat chocolate chip pancakes again.

We have to admit, we’re not particularly interested in Detective Linden’s relationship issues. We realize (and support the idea) that the premise of the show requires that you spend some time with the main players in order to round them out as people instead of archetypes, but for us, there’s no tension involved in the “will she stay or go” question hanging over her subplot. Of course she’s going to stay; you wouldn’t have a story otherwise. Now, her partner, THAT guy we love. Fantastic performance by the actor (who is, to our shock, Swedish and therefore not a native English speaker): skeevy and sleazy, with just enough of an undercurrent to let the viewer know that for all his bluster, he feels the pain of the victims and the destroyed lives he encounters. “Tell him he has a mother who prays for him every night.” “They all do.” That seems harsh, but scratch that surface and you can see it bothers him. Linden seems to notice this; she gives him these ever-so-slight, beautifully played, pursed-lips-and-raised-eyebrows looks whenever he lets the veil slip; looks that say “I see you,” without being at all obvious about it. Also, he’s a little dirty-hot, but that’s probably beside the point.

We tuned in last night with some trepidation that the show wouldn’t remain as interesting to us, but five minutes in, we were doing that thing we only do when we really love a show: we kept checking the clock to see how much more time we had with these people before we had to give them up for another week. We can’t think of a better reason to recommend the show than that. 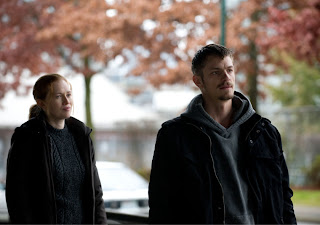 * Like we said, we’re not convinced that’s Rosie in the cell phone video. It would explain why Sterling, the best friend, is acting so weird.

* We initially thought Betty Draper’s brother had suspect written all over him, but now we’re not so sure. He’s too obviously sleazy, and making the character look shady this early in the story lessens the chances that he’ll still be a suspect in the final act.

* If anything, the councilman’s girlfriend/campaign manager is starting to look subtly shady to us.

* We thought after last week’s premiere that the Larsen parents had some sort of secret, possibly tying into why they hadn’t checked in with their teenage daughter for 72 hours. We’re not so sure. Now that we’re seeing their grief progress, we see no indications that there’s anything unusual about how they’re acting. Still, that 72-hour gap has yet to be explained.