Home » Television » Mad Style: The Chrysanthemum and the Sword

Mad Style: The Chrysanthemum and the Sword 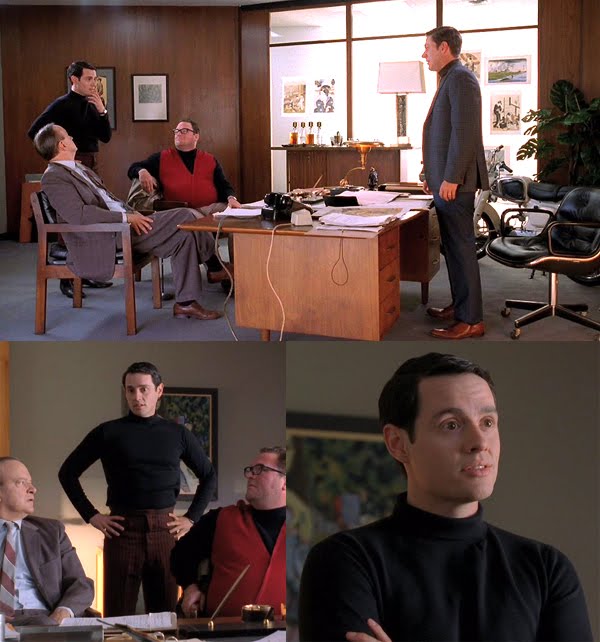 There’s a whole lot of groovy going on in the offices of CGC. Four men and 3 turtlenecks (both real and mock), people. They really are similar in a lot of ways to SCDP, aggressively pushing this NEW and MODERN concept to its limits because they know it’s an image that sells. Here, it comes right up to the edge of parody. SCDP has its modern touches in both furnishings and clothing, but 3 turtlenecks is definitely Janie Bryant having a little fun. These look like shots from a period sitcom. 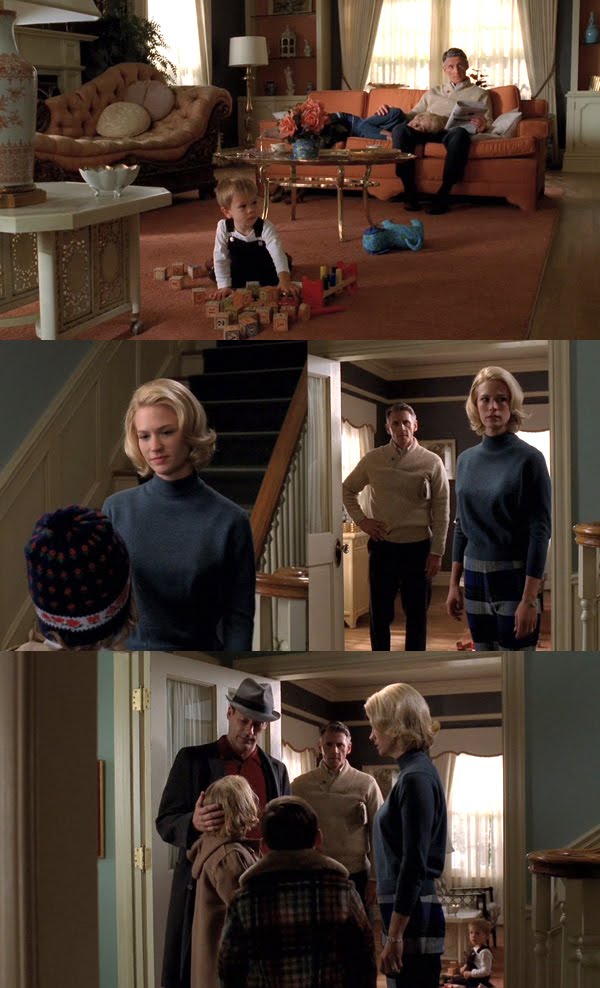 A few shots of the Francis living room, which seems to have grown tackier over the last year. And hey, remember that baby Betty had last season? That poor little bastard is going to be ignored until he starts acting out in middle school. Also, here’s Betty, wearing the pants as the other two adults in the scene are largely relegated to reacting to her. We also want to point out that if there was an Emmy for best costume usage, Jon Hamm would get it for his work with that hat. He’s been doing things with it that would make old hat-acting masters like Jimmy Stewart and Cary Grant applaud his technique. He can use it to look insouciant, to look defensive, to look sad and defeated, and to look rakish and even sexy. A prime example of an actor effectively using the tools handed to him. Watch for it. 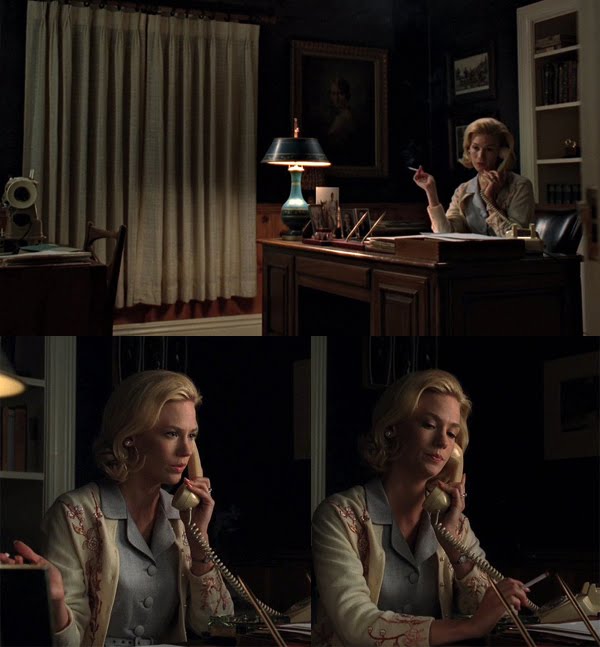 Honestly, Don deserved to be thrown out of that house and that marriage. We don’t really blame Betty for divorcing him or for her anger toward him. She may not be a likeable character and she certainly has more flaws than a lot of them, but not wanting to remain married to Don Draper né Dick Whitman is not one of them.

Having said that, it’s still weird and oddly painful to see the former Draper house with all traces of its former namesake stripped of it. Don is nowhere to be seen in what used to be his office. That looks like Betty’s mother’s portrait hanging on the wall (although it also looks to be a different one than the one we saw in her father’s house) and Betty’s sewing machine has moved in. Jarring feminine touches in Don’s old man cave of secrets.

Isn’t it weird that she would keep the desk, given its role in the end of her marriage and how it represents the 10-year lie she was subjected to? Betty hasn’t left that house because she can’t let go.

We’ll be honest. We think Betty looks absolutely terrifying here. As far as we’re concerned, Matthew Weiner and his team of writers have earned a huge chunk of our trust, but turning Betty from a character with shades of gray into the almost-villain she is this season is not a development that thrills us. It puts the audience firmly on Don’s side in a situation that isn’t quite so one-sided. Listen, we want to root for Don too. We DO root for Don. But narratively speaking, we don’t think it’s necessary to drag Betty further down to get the audience to do it. Like we said, we trust the creators and maybe this will all pay off brilliantly, but it’s been making us decidedly uneasy from the minute we saw her shove sweet potatoes in Sally’s mouth.

Anyway, yes. She looks terrifying here. All icy, and angles, and precision. A glossy sheen instead of a living, breathing woman. More appropriate for the dollhouse at which she gazes lovingly than the real world. Note how cold she is in opposition to the colors of her surroundings, which are dominated by oranges, yellows, and greens. And finally, there’s the fact that she’s in blue and Dr. Edna’s in pink, the colors that denote children. 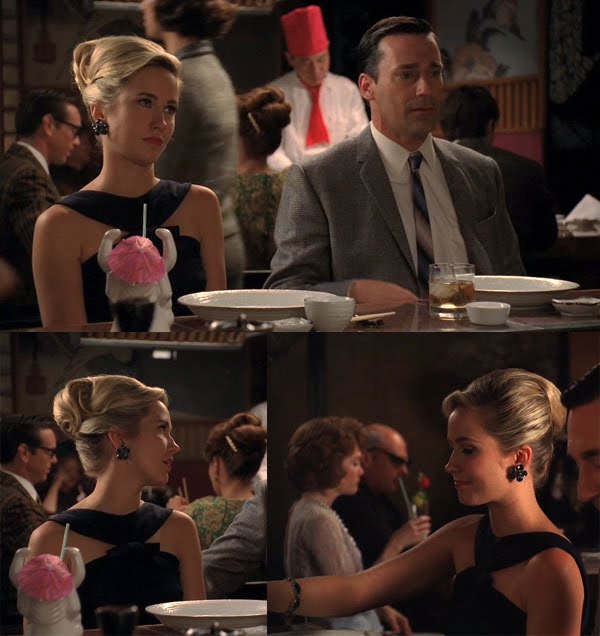 We really didn’t get to see much of Bethany’s dress but it looks pretty cute from these shots. 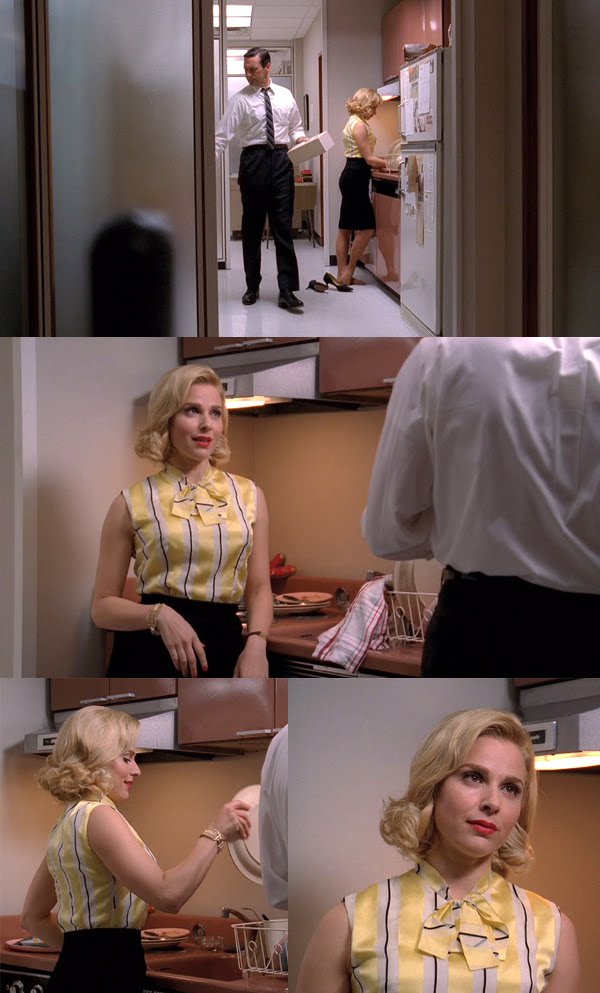 Now here’s what we thought was interesting about Dr. Faye’s getup (aside from the fact that she was barefoot and in the kitchen). The black isn’t new; she favors it. This is at least the third or fourth time she’s worn it. The bold stripe isn’t really off-model either. She favors blouses with bold graphics. What’s interesting is how her styling so clearly evokes Betty from a couple seasons ago. Pale pastels and sleeveless were definitely in Betty’s wheelhouse and that hairstyle is exactly Betty’s hairstyle. They’re doing such a dance with these characters and truth be told, they seem like such an unlikely match that we’re wondering if the deliberate Betty styling is meant to give the viewer an uneasiness about her. 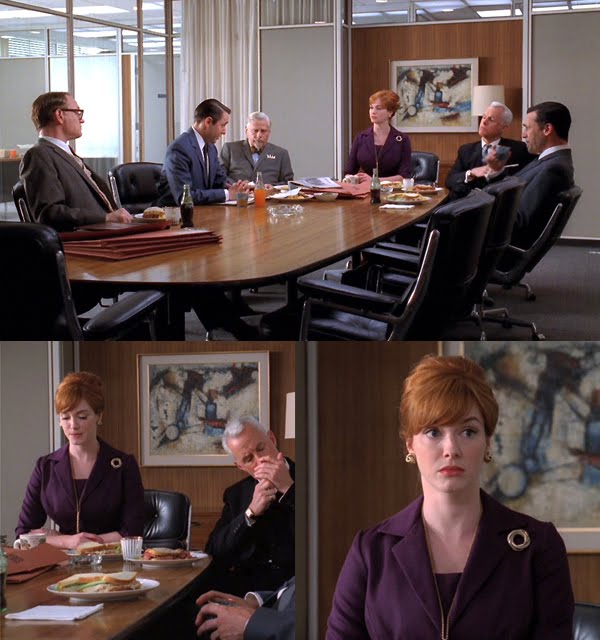 Joan is in purple and once again … we don’t think it means anything. Or if it does, it means those parts of her that purple used to reference are far in the past. At any rate, what interests us here is that she looks like she might be wearing an actual suit. She’s had tiny little faux jackets and cardigans, but we don’t think Joan has actually worn a 3-piece suit. 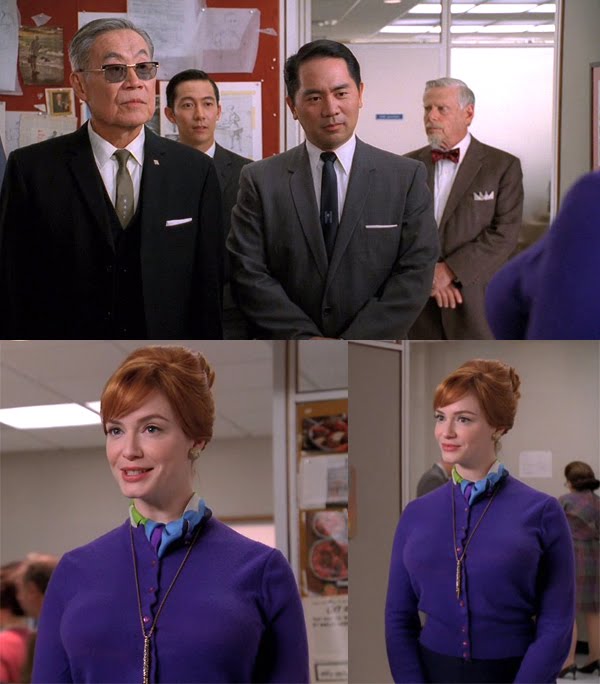 And here is a VERY different Joan; a Joan who was probably directed by Bert Cooper to present herself as modestly as possible to the gentlemen from Honda. We think it’s hilarious that the buttons on her cardigan are straining across her chest. Obviously, this is a new position for them. Also love how dammit, Joan was still going to wear a damn scarf if she wants to. Only this time it’s jammed in around the collar to cover her up even more.

Plus, this is the least amount of makeup she’s ever worn in the office and the jewelry is very understated for her. No brooch, small earrings. 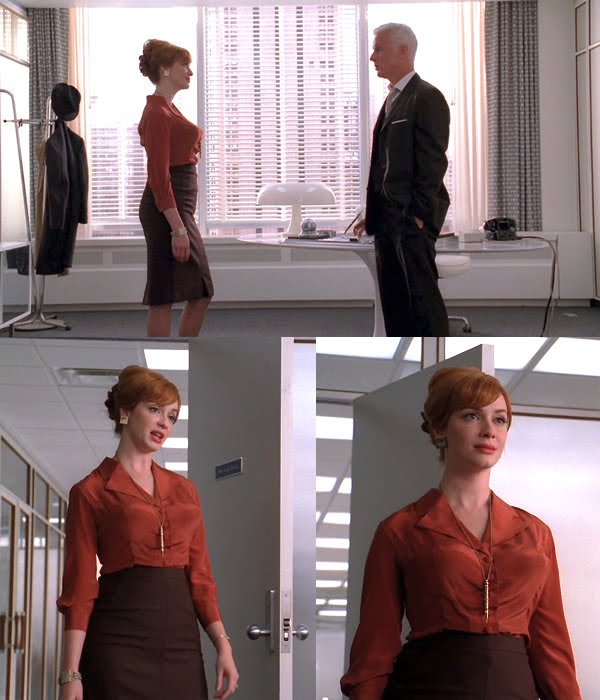 Not much to say here except that we love this outfit on her and that she stands out as a column of warmth in that cold and sterile office. We’re loving these intimate little chats these two have away from the others. 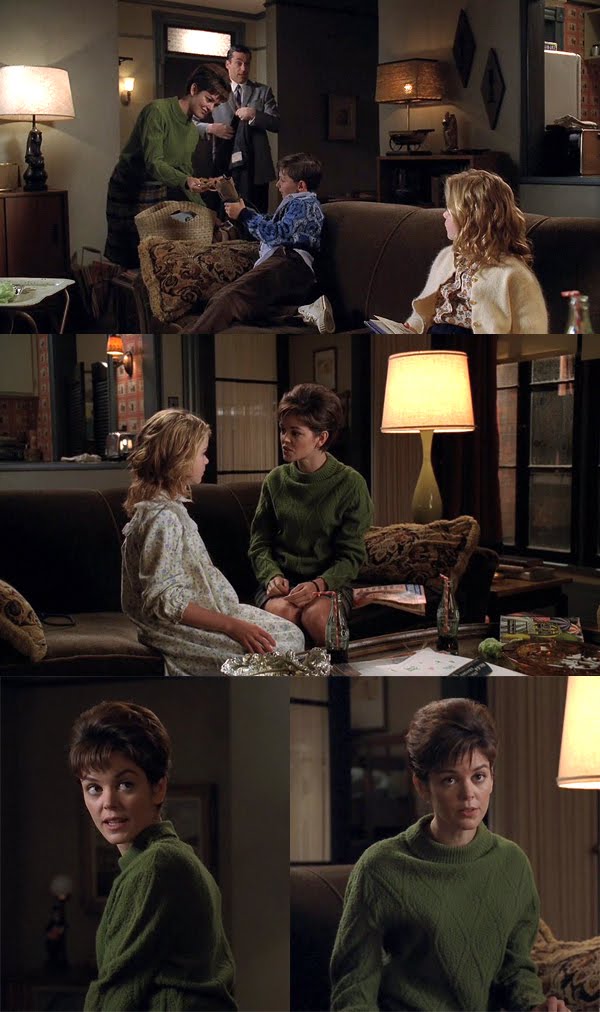 Phoebe, dressed like a typical college student of the time, in an oversized sweater and plaid schoolgirl skirt. Yes, we know she’s a nurse, but we’re pretty sure college isn’t exactly a distant memory for her. She looks adorable, and period-perfect. 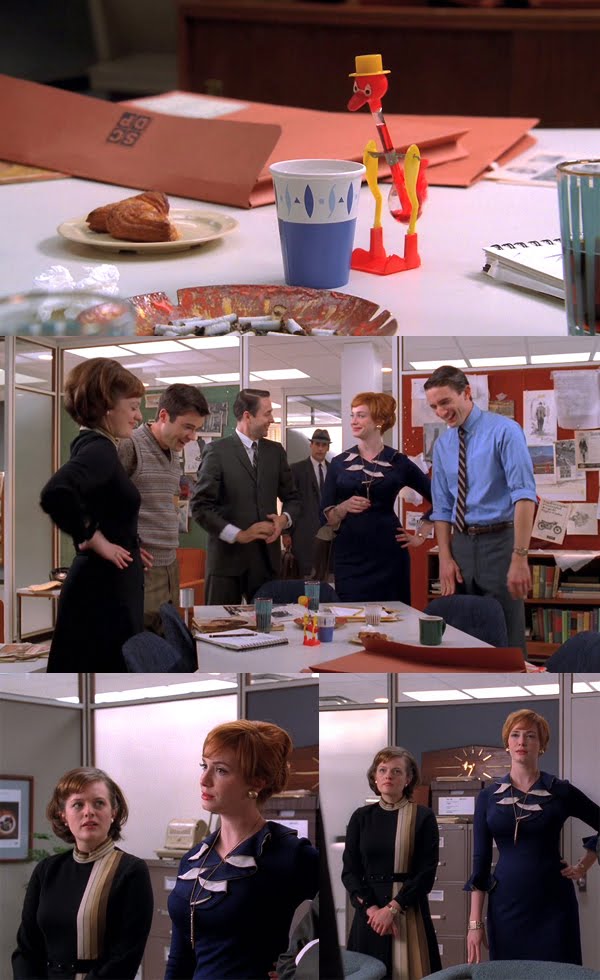 Check out Pegs! Where did THAT come from? That is a huge change in direction for her. Have we ever seen Peggy in black? Lots and lots of black showing up in this assassination-heavy period. Peggy, Joan and Faye have all been wearing it.

Still we wouldn’t call this dress funereal. It’s kinda kicky, actually. Still, it reads decidedly mature in 2010, like Peggy’s hairstyle. It’s just that many women of Peggy’s generation continued to look exactly like this well into their sixties. Same thing with Betty’s Lady Bird Johnson look. Although we doubt Peggy will be one of those ladies. Hell, Peggy will probably get a tattoo on her 65th birthday.

Joan, of course, looks spectacular in that dress. 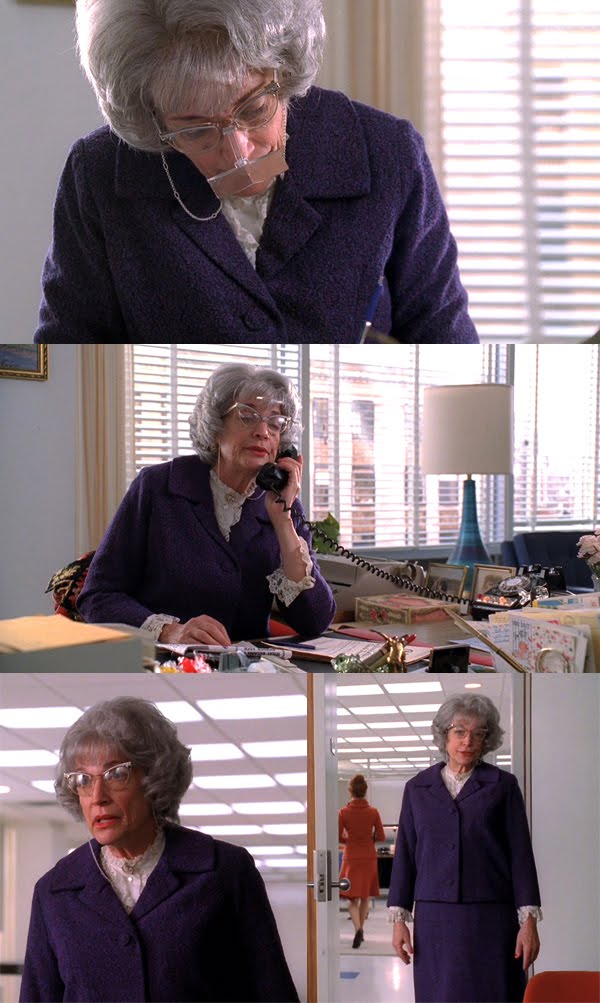 Now THOSE are some old lady clothes. Note that she’s in a work-appropriate Chanel-style suit, but her blouse and cameo pin are pure 1915. There have always been people who dress in their old age exactly how they dressed in their younger years. Look at Roger Sterling (and we will, at some future date). We guarantee he’s been going to the same tailor getting the same suit made since he was 20. 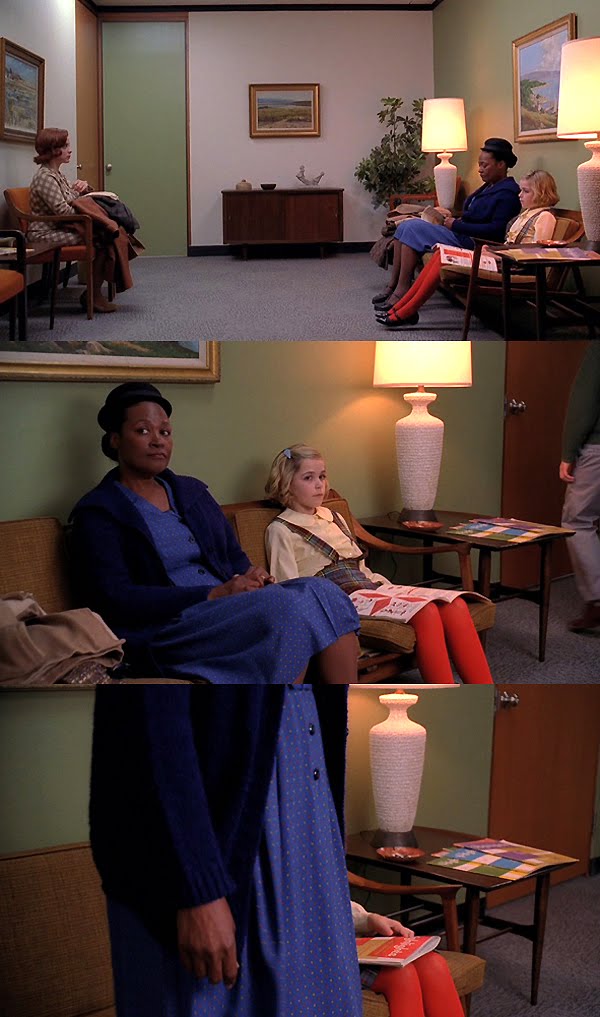 And finally, we wanted to showcase this last series of shots for a couple reasons. One, we never get to look at Carla’s clothes. There’s not enough variation there to do a whole post on her, especially since half the time she’s either in a uniform or has her coat on. But we wanted to stop and point out the sensible shoes, her sturdy and trusty hat, her well-worn cardigan and day dress. This isn’t a maid’s uniform but it might as well have been. Additionally, Sally’s dressed very typically for a girl her age in 1965; the brightly colored tights under the plaid jumper with the Mary Jane shoes. And finally, Boomers, Gen Xers and Millenials can all squee in delight at the “Highlights” Magazine on her lap and on the table, a mainstay in many a doctor’s waiting room. Goofus and Gallant were both hopeless dorks, by the way. We wanted to hang out with the Timbertoes.