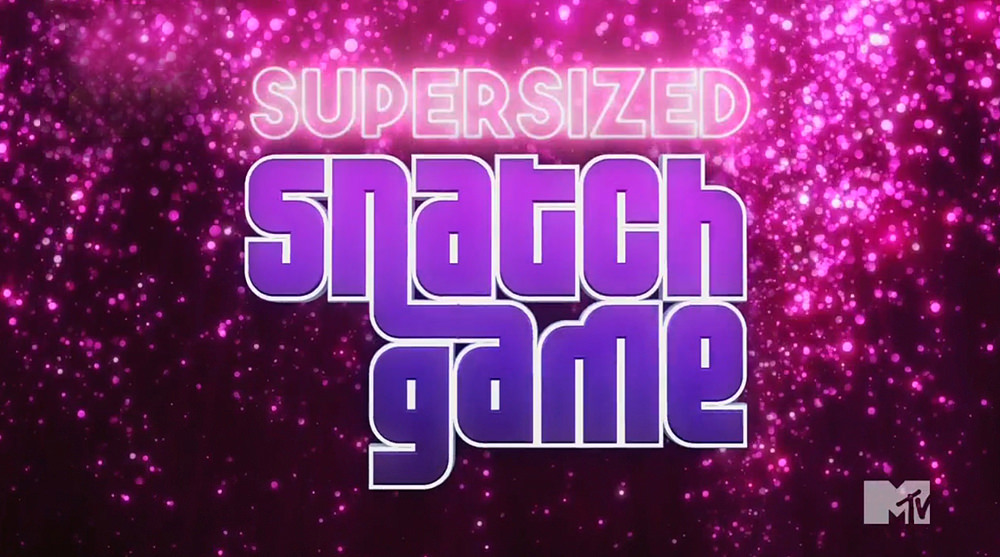 Considering where they situated the Snatch Game this season (much earlier than normal, with a much larger cast than normal), we wonder if the show hadn’t yet gotten the news that it would be reduced from 90 minutes down to an hour in order to make room for Brad & Todrick’s Mess House on the MTV schedule. In fact, it’s becoming a little more obvious with each episode this season that Drag Race is struggling to put on the same insanely popular, Emmy-winning show it’s always been. There seems to be no time for mini-challenges, no time for Ru to go through the Werk Room and mentor the queens, and no time for any real drama to play out, either of the interpersonal variety or simply because someone’s struggling to put their act or look together. So far, it’s just, “Here’s your assignment. I’ll meet you on the runway,” and then five minutes later, the runway music kicks in. When the challenge is completed, six queens are chosen to receive precisely 15 seconds of minor critiques or praise because no one wants to be on Drag Race unless the producers can promise the judges won’t trash them. ALLEGEDLY. Anyway, it’s all making for a very truncated Drag Race experience in which all of the things that have defined the show are either passed over or quickly dismissed. In unrelated news, Ru once again shows herself to be a thrifty queen – or just a really smart one, because if you get Zaldy to make you an insanely killer suit for the Met Gala, are you really going to wear it only once? Also: We just thought you should know. We kinda thought they should have just leaned into the chaos and put all fourteen queens out there at once. It probably wouldn’t have been any funnier, but at least the desperation levels would have been higher. Marcia Cubed did a fantastic job of impersonating Tim Gunn. She had the look and voice down cold. She remained in character throughout the game and landed a few lines here and there. It was never going to win, but it was a very good attempt that placed her safely at the top. Luxx had no jokes and we’re sorry, but she really didn’t have the look down at all. Amanda Lepore is a total caricature of a human being, with facial proportions that can’t be mimicked with basic drag makeup. If you’re not going to use prosthetics to play her, we don’t think it’s worth doing. Malaysia picked a great character and mimicked the look perfectly. No jokes to be had anywhere, unfortunately. Mistress Isabelle sort of had the look and basically created a different version of Rosie that didn’t quite nail the impression, but had a certain consistency to it which made it feel true. A lot of good drag impersonation is less about being flawlessly accurate and more about creating a drag version of someone that just feels right. We sure would have loved to have heard how Anetra landed on playing a drag version of Gordon Ramsey but ooops! No time! Gotta give Brad and Todrick another shot at stardom! She was sharp enough to give it back to Ru, but the jokes only barely landed, which means she was the quintessential safe Snatch. A pure void. Girlfriend needs to douse her pussy in gasoline and light a match at this point. There are two ways to win – or at least survive – Snatch Game. Loosey did it one way (the one that usually results in wins more often) and Salina did it the other way; what we like to call the Alyssa Edwards technique: you just go full bore on the character you’ve created, whether or not it makes sense. Just keep hammering Ru with lines and eventually some of them will land. She wasn’t hilarious and she sure as hell wasn’t polished, but she had the character she created in her head down cold. Besides, Ru likes a little blasphemy in his drag. Round Two! Line ’em up and shove them out there! We’re doing Drag Race assembly line style so Brad Goreski can buy another house! There’s simply no denying that Loosey earned this one. We wondered who she had left in her trick bag after she threw that Snatch-worthy Dolly Parton out like it was nothing. It seems too obvious to state, but we’ll state it anyway: she won because she had the look, she had the voice, and most important of all, she had the jokes. She was never caught flat-footed once. Every time Ru tossed to her, she knocked it out of the studio. Sasha absolutely had the look down cold, but we can’t remember one thing she said or did during the entire game. Doing Mona Lisa drag is a pretty cute way to cover for your low-affect performing abilities and Jax actually did acquit herself, if not well, then semi-competently. But if this were a real competition with an actual judging panel offering critiques, she would have been raked over the coals for failing to do drag. It’s not hard to put a Mona Lisa costume together. Poking your head through a cutout is grade-school level. This is so generic. It could be literally any bubbleheaded blonde, because that’s all Sugar does. Not to defend Trisha Paytas as some great artist or thinker, but she’s not just some pink-wearing blonde sporting a rack. She’s rougher, sharper-edged and much more fast-talking than the pseudo-Paris Hilton figure Sugar literally always portrays. How could you do Trisha Paytas drag and sport such a basic, stubby manicure? Where are the talons? It’s probably the easiest part of her look to get right. We were a little puzzled by the circa 2009 references throughout this episode, although there’s nothing wrong with reaching into the recent past to do a bit. Amethyst was really pleased with herself, but we thought it pretty weak that she felt like landing in the safe group with a dated reference, basic drag, and a few minor laughs was some sort of triumph for her. She’s set the bar pretty low for herself. As always, any critique of one twin can be applied to the other one. Just a generic bubblehead. Miley Cyrus is far from a generic pop starlet who used to stick out her tongue a lot. These two really think you can create a different character by doing exactly the same drag in a different wig. We couldn’t roll our eyes hard enough at a queen, in this Year of Our Lord Two Thousand and Twenty-Three, panicking at the thought of doing Snatch Game because “I don’t do impressions.” Pardon our bluntness, but bitch, why are you even here, then? This was a good choice of character for him to play from a visual perspective, but he didn’t have the personality to pull it off. The runway category was “Beautiful Nightmare,” which allowed some of the queens to get a little freaky, although we were a little disappointed by how safe and tame the looks were overall. There are way too many girls at this point to assess them all, but of the safe girls here, we thought Malaysia, Anetra, and Sasha really stood out. We absolutely agree with the judges on the only minor critique they made, which is that Marcia Marcia Marcia really needs to step her drag up considerably. Mistress Isabelle’s look is interesting, but it really doesn’t look like nightmare drag to us. The cage and collar both look a little flimsy and craftsy. Amazing hair and makeup, though. It really was Loosey’s week. She not only had the best Snatch, she also had the best drag on the runway. We’re kind of disappointed we aren’t going to see more of her frustration at not being recognized, because it was getting kind of entertaining. She’s just not that interesting. Sorry. As for these two, we remain irritated that they can’t even render their own concept effectively. Sugar and Spice would be more understandable as characters if one of them was all sweetness and the other was all dark or trashy somehow, but they do the exact same drag with just the colors switched up. This might seem like a minor thing to obsess over, but to us, it’s the best indicator of just how limited they are. They only know how to do Bratz doll drag and when you ask either of them to play a character, they play they some bubblehead, over and over. They’re supposed to be nightmares here, for fuck’s sake. It’s not fresh, it’s not imaginative, and it’s not entertaining. It’s technically well-executed drag without any real talent fueling it. We all knew this was coming eventually, but we can’t get annoyed by it, because if you asked us who the worst queens were this week, there’d be no question that it was these two. We sat through their not-particularly-great coordinated lip synch fearful that Ru was going to keep them both in, but hoping that she’d cut them both loose. In the end, we guess we’re just going to have to be happy with this compromise. They both said they’d leave if the other one got eliminated, but the girls talked them out of it. It’ll be interesting to see if Spice thrives or collapses without her twin there.